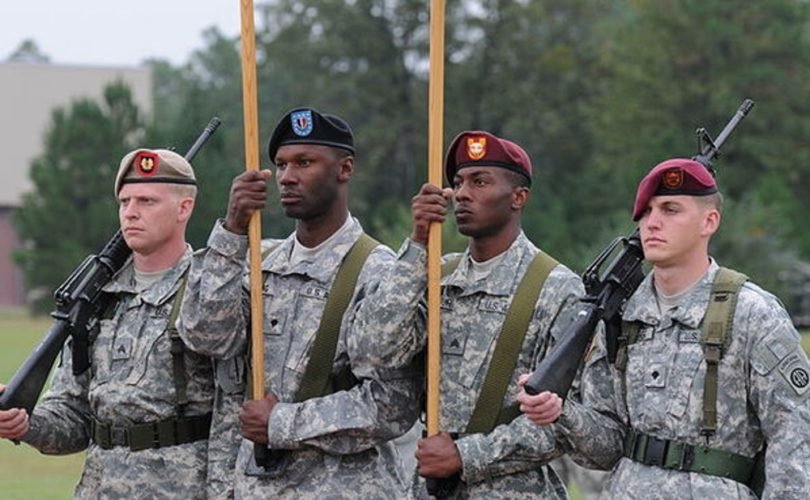 June 23, 2021 (American Thinker) – On 17 August 1955, President Dwight D. Eisenhower prescribed a Code of Conduct for members of the Armed Forces of the United States. The purpose was to inform each service member in a combat unit about their basic responsibilities when engaged in combat or if they were captured by enemy forces. Of the six articles, the first and sixth articles are particularly powerful reminders about the Armed Forces’ mission and the dedication each member requires to complete that mission:

I am an American, fighting in the forces which guard my country and our way of life. I am prepared to give my life in their defense.

I will never forget that I am an American, fighting for freedom, responsible for my actions, and dedicated to the principles which made my country free. I will trust in my God and in the United States of America.

It’s a matter of primary importance when recruiting a skilled and talented all-volunteer military force that the institution and its members, along with the desire to serve our country, firmly believe in America’s unique and moral character and the freedoms from which we all benefit. Along with these beliefs and desires, each member of the military must also develop a strong loyalty to his or her brothers and sisters in arms.

These tenets are foundational to a purposeful, effective fighting force. To go into combat, one must fully believe that the United States’ cause and purpose are just and morally upright. The mission must be clear: to fight and win.

Each person serving must see fellow service members as integral and necessary parts of this mission. Studies of 20th-century wars, especially the experiences of those captured and held as prisoners of war, have repeatedly shown that this foundational relationship between fellow service members, their belief in the cause for which they are fighting, and their belief in the United States of America are all vitally important to survival.

As a 20-year veteran of the United States Navy, I was taught this Code of Conduct and instructed in the responsibilities that accompanied my service. These Core Values enabled me to develop attitudes and behaviors that embody and represent the best of America’s values and founding principles. During my time in the Navy, fairness, equity, and equal opportunity were integral to the service and were relentlessly instilled in the military’s culture. Perhaps just as importantly, I have seen the concomitant diversity that is the natural by-product of this culture, because it rewards hard work, talent, and ability for their own sake, for their undeniable merit, and for the betterment and preservation of America itself.

Given the inherent and undeniable virtues of this colorblind, merit-based system based upon shared values, the Armed Forces of the United States travel a pernicious and destructive path if they embrace critical race theory, with its core belief that America and her citizenry are irredeemably racist, along with the tenets of “white supremacy,” “whiteness,” “white privilege,” “white fragility,” and “systemic” or “institutional racism.”

Critical race theory does not build up, it tears down. There is nothing aspirational or uplifting about it. And as a springboard to establishing “diversity” as a goal unto itself, as its own concurrent priority, inculcating those values into troops will not equip the military to succeed at its first, and most important goal, which is to fight and win in armed conflict.

Critical race theory is antithetical to the principles each military branch teaches, particularly in “boot camp” or “basic training.” This entry-level training – and the arduous nature of the entire indoctrination into military service – must necessarily diminish each recruit’s or candidate’s individual identity and replace it with the aspirational goal of becoming part of a successful, elite team with its own service’s unique culture and esprit de corps.

Critical race theory, by contrast, undermines the necessary team building and teaches that all interactions with others will be based solely according to race. Nothing could be further from reality when each branch of service in the Armed Forces properly acts in accordance with its core values and the guiding principles that have made America truly exceptional in human history.

So, given this deviation from core principles, I must ask: “Where are the Admirals?” “Where are the Generals?” Just as important, where are my fellow veterans, and why are we allowing what all should recognize as a crass, purely political, fraudulent, and destructive ideology to erode the foundations of military service and success? Why are we silent while these toxic and corrosive ideals are taught to our Sailors, Soldiers, Airmen, Marines, and Coast Guards?

The Armed Forces have an undeniable history of equal opportunities for advancement and achievement for all who serve. Therefore, critical race theory has no value as a course of instruction for the military services because this history proves that neither America nor her military are “irredeemably racist” cultures or institutions. To the contrary, our already diverse military’s undeniable success provides its own irrefutable testimony to the greatness of the nation the military’s members take an oath to defend – with their own lives, if necessary.

My “real-world” experience has shown me that all unit commanders who consistently enforce Constitutional principles and sticks strictly with the core values and guiding principles that define their branch of service will avoid any race defining or determining outcomes. The United States military’s command structure and meritocracy – the merit-based system of performance evaluation and promotion – have guaranteed in the past, and will continue to guarantee in the future, an overwhelmingly “color-blind” system of achievement that benefits not only the individual, but the team, and our country.

If the American military, in connection with its primary mission to fight and win, desires to field a military force (and promote leaders from within its ranks) that reflects more closely the racial distribution in America, it must begin now, with young people, to recruit and inform America’s youth about the high calling and the unique opportunities associated with military service.  Our children must know they have a future story. That story leads to hope and aspirational goals that are greater than themselves.

They must be taught why America is exceptional, making it a beacon of freedom in the world, and why we as a nation have the high calling to actively advocate – and sometimes to fight – for the freedoms we hold so dear. If America expects to continue to field a military force that is second-to-none in its talent, technology, and ability to win, America must raise up the patriots who will be willing to serve the nation and serve alongside their brothers and sisters from all walks of life, from every corner, every avenue, hill, and dale of the nation.

Critical race theory, which is predicated on misrepresenting America’s history and culture interchangeably as “systemically racist” or “institutionally racist,” and which blames these factors for every societal ill and unequal outcome, is a divisive and destructive lie. There is nothing inherent in these ideologies, these attitudes, and the hatred for America they espouse that is beneficial to anyone, much less to the United States military.

Jeff M. Lewis is a retired Commander who served in the United States Navy for 20 years, flying the A-6E “Intruder” and the FA-18 “Hornet.” He is a self-employed small business owner and resides with his family in South Texas.