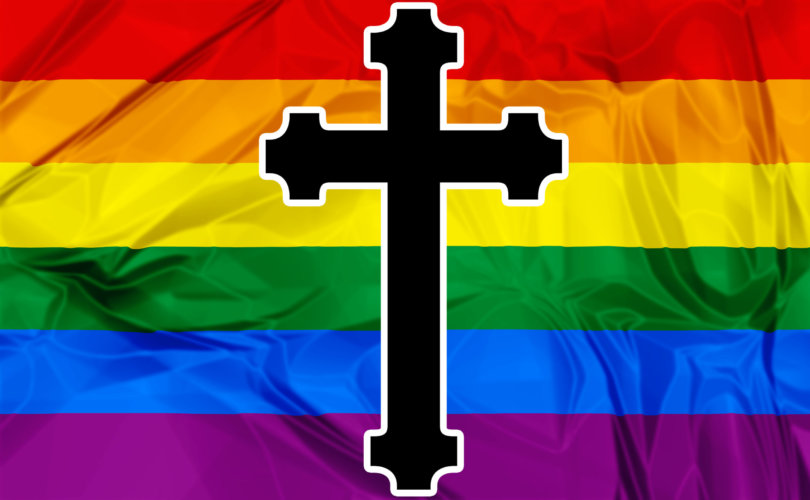 January 17, 2017 (LifeSiteNews) – As controversy continues to rage over Pope Francis’ doctrines on communion for the divorced and remarried, an even more controversial practice proliferating in the shadows for decades is becoming increasingly open and explicit: same-sex couples exerting their influence in Catholic parishes throughout the United States and Canada.

At a rapidly growing number of proudly “gay-friendly” parishes, same-sex couples who flout the Church’s teaching on the immorality of homosexual acts are exercising leadership roles and receiving Communion with encouragement from their pastors.

The phenomenon can be found in dioceses led by bishops with reputations as orthodox “conservatives” as well as notoriously liberal ones. However, a common thread seems to run through all of them: the persistent unwillingness of the diocesan authority to enter into conflict with a powerful and aggressive homosexual movement.

Since the 1970s when certain American and Canadian parishes became known as “gay-friendly,” and wayward clergy and laity began “non-judgmental” homosexual outreach ministries such as “New Ways” and “Dignity USA,” the number of parishes that tolerate or accept homosexual behavior has ballooned to include parishes in most of the dioceses of the United States.

Although New Ways Ministries has been repeatedly condemned by the Catholic hierarchy, it currently lists about 240 parishes in 165 cities and towns that conform to its “gay-friendly” standards. Nine archdioceses and dioceses have four or more such parishes listed by New Ways, such as Chicago (11), Los Angeles (10), New York (6), Tucson (5), Brooklyn (5), Portland, Oregon (5), San Francisco (4), Philadelphia (4), and Baltimore (4).

These parishes often maintain “LGBT outreach” programs that affirm the homosexuality of members and even encourage homosexuals to be “proud” of their sexual activity. They publicly celebrate anniversaries of the unions of same-sex partners, listing them in parish bulletins. They place active homosexuals in positions of parish leadership. They participate in homosexual pride parades in which same-sex acts are condoned and even engaged in, and celebrate Masses commemorating the parades and other events of importance to the “gay” subculture.

What appears to be absent in such parishes is any mention of the Catholic Church’s doctrine regarding the natural purpose of human sexuality and the intrinsic evil of homosexual acts.

According to Catholic teaching, the sexual act exists to reinforce the unity of a man and a woman united in marriage and to produce offspring. The Catechism of the Catholic Church unequivocally condemns homosexual sodomy as “acts of grave depravity” and “intrinsically disordered.”

In “gay-friendly” parishes, however, the Church’s concept of marriage, family, and sexuality is openly treated differently. Instead of guiding those with “same-sex attraction” to a life of celibacy and addressing psychological problems, homosexuals are told that their impulses stem from their very nature, that they were created by God as homosexuals and that the “gay” ethos is part of their identity.

Although complaints have been made to diocesan authorities for decades regarding these parishes, the Catholic hierarchy rarely acts to correct them. In fact, some have actively encouraged the “gay” activity. Even bishops with a reputation for faithful adherence to Catholic doctrine have made only timid attempts to rein them in, and rarely act decisively to end abuses. The result is an atmosphere of impunity in which pastors and parishioners are growing increasingly bold in their public declarations in favor of the homosexual lifestyle.

At San Francisco’s Most Holy Redeemer parish, which is situated in the predominantly homosexual Castro district, the gay subculture has received open support since the 1970s by pastors and parishioners. Under the guidance of “gay friendly” leadership, the parish openly subverts Catholic teaching on human sexuality, participating in parades that celebrate the homosexual lifestyle, commemorating anniversaries of same-sex unions, and maintaining a library of books defending and celebrating same-sex sodomy.

In the Archdiocese of Los Angeles, where New Ways lists no less than 10 “gay-friendly” parishes, a homosexual couple was recently permitted to bring up the gifts during the offertory rite of a nationally-televised Mass presided over by Archbishop José Gomez. The event was the culmination of years of cooperation in the homosexual subculture on the part of the archdiocese, including active participation in “gay pride” events by its “Catholic Ministry with Gay and Lesbian Persons.”

“For the most part, my attempts at instigating a dialogue or discourse with certain bishops in terms of sharing my experiences about gay-affirmative parishes and ministries has failed,” Sciambra told LifeSiteNews. “In some cases, it has taken years to elicit a single response. Then they have recommended patience.”

Patience, however, is difficult for Sciambra, who watched dozens of friends die as a result of their homosexual lifestyle.

“As someone who lost friends to AIDS, partially because they were willfully deceived by priests who recommended that they remain in the ‘gay’ lifestyle, watching as these parishes and ministries continue to confuse and mislead others, sometimes for over 30 years, it’s difficult to remain patiently silent,” Sciambra told LifeSiteNews. “I tend to look at it this way: When a doctor is treating someone suffering from a leg infected by gangrene, does the doctor advise patience, or does he act swiftly and decisively in order to save the person?  Because time is of the essence.”

Sciambra himself sought help from the “gay friendly” Most Holy Redeemer parish in San Francisco but found that instead of discouraging him from his self-destructive behavior, they encouraged him to embrace his “gay” identity.

“One day, after partaking in an especially gruesome sex act, I felt an inexplicable need to ‘confess’ it. A priest at Most Holy Redeemer told me to settle down with one person. But he assured me that I was in the right place (the Castro) – because, after all, I was born gay.”

Sciambra says he “felt curiously cheated” by the encounter and didn’t return to the confessional for years. The result was that he became hardened in his embrace of homosexuality and continued down his self-destructive path.

“What I think I subconsciously wanted to hear from the priest was that my life I had gone out of control, that I wasn’t ‘gay,’ and that I wasn’t where I needed to be. Although, inside, I was fighting against homosexuality, against my ‘gay’ identity, this incident locked those things into place. Because, now, I felt like I had nowhere else to go. This was my lot in life, and, like the priest advised me, I better make the best of it.”

When he was in danger of dying as a result of his behavior, Sciambra says he went to a second priest – and was given similar advice.

“Later, after I stayed in the homosexual lifestyle, and almost died, another priest inexplicably told me much the same thing. At that point, I wised up very quickly and became extremely discriminating about to whom I sought out for Confession.”

In Sciambra’s experience, such parishes absolutely refuse any association with Courage and other Catholic ministries that encourage those afflicted with “same-sex attraction” to remain chaste and celibate.  “Any suggestion about establishing a Courage chapter at these parishes has been met with immediate indignation. The very concept itself is viewed as an impossibility,” he told LifeSiteNews.

However, such parishes supply an endless lineup of speakers who subtly or not-so-subtly promote the gay agenda. “At these talks, it’s often easy to become convinced that the Church is wrong, that I was created by God as a ‘gay’ person, and that soon the teachings on homosexuality will all change. This is a clear deception.” Among these speakers are “priests who are themselves confused and conflicted about their own sexuality, or are trying to settle their differences with the Church by fomenting dissention on the parish level.”

Members of the parish are therefore further ensconced in their misconception of their own true identities as men and women, as well as the authentic doctrines of the Catholic Church on human sexuality. “As a result, ‘gay’ men and women, including those who may have been open to at least considering another way of viewing themselves and their sexuality, are confirmed in the homosexual orientation,” Sciambra says. Instead of offering a choice, by presenting the Truth, these gay-affirmative parishes and ministries pander to the fears and insecurities of the “gay” community.”

“They have encouraged a false hope. They are neither loving nor merciful; for true love and mercy cannot exist without the Truth,” Sciambra says.