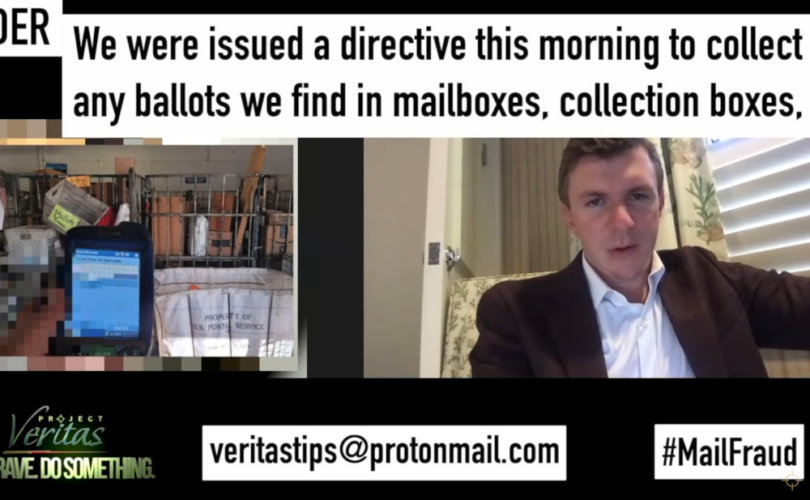 November 5, 2020 (LifeSiteNews) — An employee of the U.S. Postal Service (USPS) claimed he and his co-workers were asked by a supervisor to back-date mail-in ballots received after election day.

Speaking through a scrambler to retain anonymity, the USPS worker explained how his “supervisor instructed mail carriers at his work site here that all new ballot envelopes should be segregated in bins, so that postal clerks could fraudulently hand-postmark them as received Nov. 3,” as Project Veritas summarized the conversation.

Despite the law in Michigan stipulating that ballots must be received by 8 p.m. on election day in order to be counted, the supervisor, Jonathan Clarke, instructed staff to “collect any ballots that we find in mailboxes, collection boxes, just outgoing mail in general, separate them at the end of the day so that they could hand stamp them with the previous day’s date. Today is November 4, for clarification.”

The anonymous source added he had confirmation that a postmaster in a different office was doing the same.

USPS staff were told to then send the newly marked ballots “through the express system to wherever they needed to go.”

“There’s a standard hamper that all letter mail is supposed to go to, and they had a tub next to it that we were supposed to put any ballots collected today into.”

James O’Keefe, president of Project Veritas, asked the whistleblower why he went public with his accusations. The source replied, “That’s sketchy. I don’t like sketchy. It screams corruption. And knowing the post office’s leanings politically — it didn’t seem quite right.”

The whistleblower urged other USPS staff to report anything similar, warning that the nation’s integrity was at stake: “How are we supposed to have any integrity in this country, if we just let things slide.”

Project Veritas contacted Jonathan Clarke, the whistleblower’s supervisor, to ask for comment on the allegations. Clarke immediately hung up the phone.

However, Project Veritas was later contacted by the Inspector General of USPS, to say that the office was “assessing whether to investigate.”

ELECTION FRAUD UPDATE: The Office of the Inspector General for the @USPS has just contacted @Project_Veritas in regards to our #MailFraud bombshell in Michigan

USPS workers can continue to come forward to us at [email protected] pic.twitter.com/xtwsa26Jnl

Michigan is currently at the center of the battle for the White House, after thousands of ballots exclusively for Biden were added overnight on Tuesday, causing the charts to spike in his favor.

A spokesperson for Decision Desk HQ (DDHQ), an election data and analysis company, later explained this was an error.

“It was a simple error from a file created by the state that we ingested,” the company stated, according to BuzzFeed News. “DDHQ does not correct/amend/adjust any state provided file. The state noticed the error and produced an updated count. This happens on election nights and we expect other vote tabulators in MI experienced this error and corrected in real-time as we did.”

The votes added in error were then removed from Biden’s count.

A reporter for the Daily Caller contacted the Michigan state department about the irregularity, and was told, “We cannot speculate.”

Videos emerging online indicate further unusual activity surrounding ballot counting in the state, as official observers were even locked out of the room as ballots were sorted. Footage also showed windows being blocked in order to prevent on-lookers from viewing inside an absentee ballot center in Detroit.

Meanwhile, a ballot watcher filmed suspicious activity in Detroit, observing workers potentially bringing in ballots to be counted after the cut off time.

President Trump tweeted about the phenomena in Michigan, calling it “VERY STRANGE.”

He also wrote, “They are finding Biden votes all over the place — in Pennsylvania, Wisconsin, and Michigan.”

Last night, the Trump campaign called victory in Michigan, as well as Pennsylvania, North Carolina, and Georgia. The campaign also filed filing lawsuits in Michigan and Pennsylvania, in order to prevent ballot counting until campaign advisors could observe the process to guarantee its legitimacy.

The campaign also demanded to “review those ballots which were opened and counted while we did not have meaningful access.”