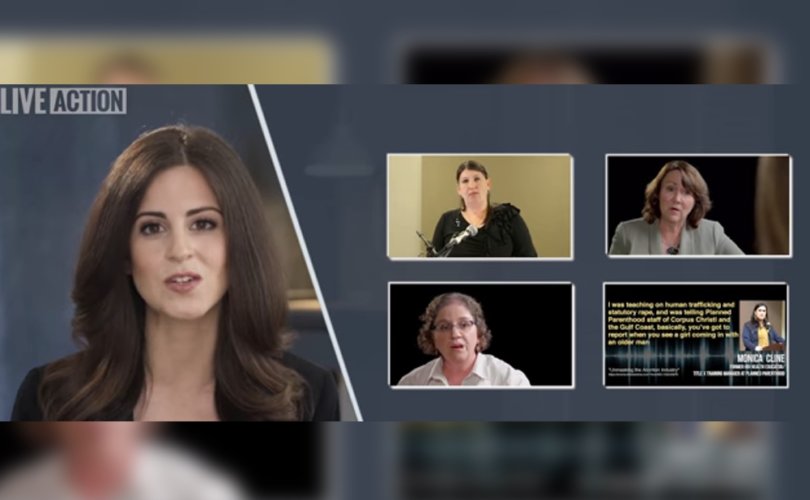 May 31, 2018 (LifeSiteNews) – Live Action released Part 3 of its “Aiding Abusers” video series Thursday, highlighting the firsthand accounts of former Planned Parenthood employees who say the abortion giant routinely refused to report statutory rape and ignored signs that young girls brought in for abortions were being molested.

“When it comes to reports of sexual assault and sexual harassment, Planned Parenthood has used the slogan that we should ‘trust women,’ so let’s follow that advice and listen to the testimonies of these four women who are former Planned Parenthood workers and managers who all say the same thing, that Planned Parenthood routinely covers-up child sexual abuse,” Live Action President Lila Rose says at the beginning of the latest video.

In the video, ex-Planned Parenthood employee Catherine Adair quotes former colleagues as dismissing her appeals to report apparent abusers bringing in their victims for abortions by saying, “She’s better off with the abortions. We can’t do anything about what’s going on at home but at least we can give her the abortion.”

Former HIV health educator and Title X training manager Monica Cline says that when she broached the subject with the Planned Parenthood staff of Corpus Christi and the Gulf Coast, they actually laughed at her.

“Honey, if she’s not having sex with this man this week she’ll have another one next week,” Cline recalls the dismissive abortion workers saying.

“We were all required to be mandatory reporters, but if we saw a case… uh… questionable abuse, or even for sure — I mean, this kid is being abused – um, we really were discouraged from calling it in, just because, uh, they didn’t want to have the trouble, the angry parent…the angry boyfriend, whatever it was,” former Planned Parenthood manager Sue Thayer tells Live Action. “So, more than once I was told, ‘No, that is not reportable – you don’t need to call it in.’”

A fourth whistleblower, Marianne Anderson, recalls a “controlling” man who came into the Planned Parenthood where she worked. He was with an Asian girl who didn’t speak English. The man answered questions on her behalf and attempted to prevent one-on-one discussion between the girl and the staff, but through a translation line she eventually described living in a home with many other young women, and little to eat or wear.

“I told my coworker I was thinking about [reporting] this, she says, ‘I would not recommend that unless you want a lot of problems,” Anderson says. She added that the experience left her feeling “degraded, like women don’t really matter.”

Taken together, the testimonies of these four women depict a workplace culture of disinterest in preventing sexual abuse, with what Cline calls a “distorted” and “dehumanized” view of children.

“I don’t know why their hearts are hardened, but they are. And so when a girl or a young man goes there for an abortion, or condoms or testing, they don’t see them with compassion anymore, if they ever did,” Cline explains. “They see them as just, almost like an animal who can’t control themselves; they’re always gonna have sex so we’re just going to give them enough lube and condoms and hope they come in to get tested before they get some kind of cancer. They’re not gonna stop statutory rape.”

The “Aiding Abuse” series’ previous videos detail numerous documented cases in which Planned Parenthood’s refusal to report men who arranged abortions for girls as young as 12 enabled their abusers to continue raping them.

The remaining videos will recap the findings of Live Action’s past undercover investigations into sex abuse and sex trafficking cover-ups at Planned Parenthood, address Planned Parenthood’s false claims to have retrained employees following those investigations, and detail what consequences the offending personnel have faced, if any.