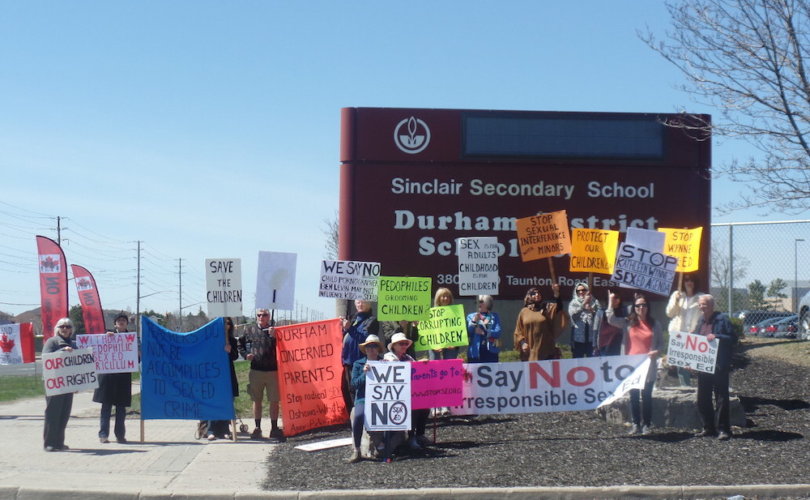 WHITBY, Ontario, April 22, 2016 (LifeSiteNews) – Eighteen concerned parents from across the Durham region outside Toronto rallied from noon till 1:30 Tuesday at a busy intersection beside the Durham Region District School Board and Sinclair Secondary School to protest the Ontario government’s new sex education curriculum. Among them was Christine Liu, president of the Parents Alliance of Ontario.

The parents carried colourful signs and handed out pamphlets about the controversial and pansexual curriculum, bearing the subtitle, “Social Engineering Goes to School: The Rape of Childhood and Why Parents Should be Concerned.” Drivers responded with positive honking and stopped to pick up pamphlets. Pedestrians including high school students were supportive and stopped to talk.

The consistent theme of the protest and pamphlet is that the sex ed curriculum introduced to the schools last year by Ontario Premier Kathleen Wynne teaches sexuality without morality to children from the earliest school ages in an effort to wean them from the traditional values of their parents and in contravention of Section 264 of the provincial Education Act, which enjoins teachers “to inculcate by precept and example, respect for religion and the principles of Judeo-Christian morality and the highest regard for truth, justice, loyalty, love of country, humanity, benevolence, sobriety, industry, frugality, purity, temperance and all other virtues.”

The pamphlets are in nine languages, bearing testimony to the diversity of Ontario’s ethnic makeup and the strong opposition to the curriculum from first- and second-generation Canadians, said Jack Fonseca of the Campaign Life Coalition and producer of the pamphlets.

Some signs made reference to the curriculum’s authorship by Ben Levin, once Wynne’s deputy when she was education minister, but lately a convicted child pornographer who also pled guilty to encouraging a young woman (fortunately an undercover policewoman) to molest her child.

Fonseca told LifeSiteNews that the week-long parent-child walkout protests that met the program’s introduction last year had died down through the winter but the Durham protests, which have been held monthly for the past three months, auger a revival of parental actions.

Parents groups across the province, led by the Canadian Families Alliance, plan car rallies in many communities on May 7, said Fonseca. The CFA, he noted, was spearheaded by the Chinese community.