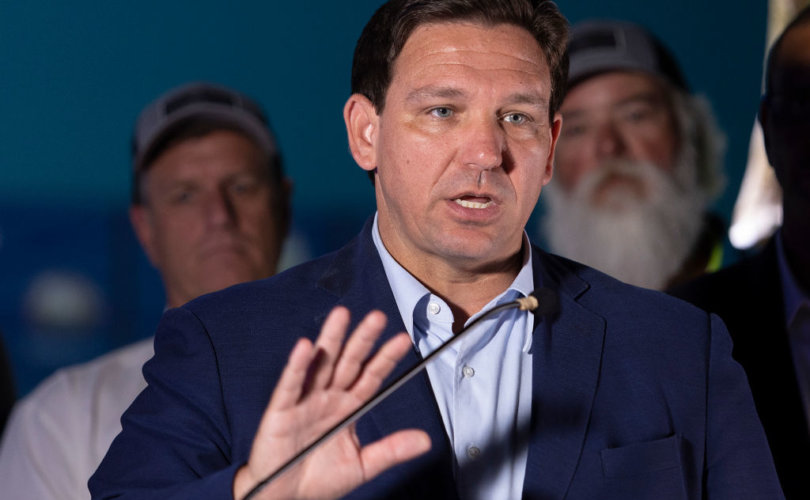 In Florida, we will protect our kids and support our parents. pic.twitter.com/rxjvnxEH9K

According to Florida Governor Ron DeSantis, the bill also “ensures that at the beginning of every school year, parents will be notified about healthcare services offered at the school, with the right to decline any service offered.”

President Joe Biden tweeted about the bill Friday, saying “Florida’s ‘Don’t Say Gay’ law takes effect today – the latest attempt by Republicans in state houses to target LGBTQI+ students, teachers, and families.” “Legislatures shouldn’t be in the business of censoring educators, and @usedgov will do all in its power to protect students,” the president concluded.

Press Secretary Karine Jean-Pierre made similar remarks in a press release Friday, saying “This is not an issue of ‘parents’ rights.’ This is discrimination, plain and simple.”

“The Department of Education will be monitoring this law, and any student or parent who believes they are experiencing discrimination is encouraged to file a complaint with the Department’s Office for Civil Rights. Our Administration will continue to fight for dignity and opportunity for every student and family—in Florida and around the country,” Jean-Pierre continued.

When asked if the Department of Education (DOE) intends to challenge Florida’s law, the DOE referred LifeSiteNews to a statement Education Secretary Miguel Cardona made Friday.

“The Biden-Harris administration will continue to fight for dignity, opportunity, and the protection of civil rights for every student and family,” Cardona said.

California Governor Gavin Newsom also reacted to the law. In a tweet posted Sunday, Newsom said “We’re about to celebrate Independence Day — but Freedom is under attack by Republican leaders in states like Florida.” “Banning books. Restricting speech. Making it harder to vote. Criminalizing women and doctors,” Newsom continued. He tweeted alongside his statement an ad for his reelection bid, which invited people from Florida to move to California.

Implementation of the law is ongoing. In May, the Palm Beach County School District sent out a letter that instructed teachers to remove books that explicitly discussed sexual orientation, gender theory, and racial themes. The district also had teachers remove posters of the “Genderbread Person,” a diagram used by teachers to indoctrinate students in gender theory.

The Leon County School Board voted unanimously Tuesday to adopt a an “LGBTQ Inclusive School Guide.” The guide holds that parents should be notified if a gender-confused child will be in the same physical education class as their child, or will be attending an overnight field trip. The guide notes that accommodations can be made for parents and students based on “religious or privacy concerns.”

The law has only been partially implemented. According to the law, the Florida Department of Education has to release guidelines on what is considered “age appropriate” for third grade and above before those provisions of the law are enforced. The department has until June 30, 2023 to release its guidelines.

The bill was met with hostility from the left when DeSantis signed it in March. The Walt Disney Company said that it would work to overturn the bill. DeSantis responded by depriving Disney of “special district status” the company had over its parks in Orlando.

The company experienced a loss of $50 billion in stock value as it defended its position against the bill, and video surfaced shortly after the company announced opposition to the legislation that showed Disney executives admitting to pushing LGBT ideology in its content.

The Parental Rights in Education Bill is subject to a lawsuit filed by liberal activists. On Wednesday, Florida Attorney General Ashley Moody filed a motion to have the suit dismissed.

“Falsely dubbed by its opponents the “Don’t Say Gay” bill, HB 1557 is nothing of the sort,” the motion reads. “Far from banning discussion of sexual orientation and gender identity, the legislation expressly allows age- and developmentally appropriate education on those subjects.”

“The bill reflects no governmental preference about what students should learn about sexual orientation and gender identity,” the motion continues. “Those subjects must be taught appropriately and, for the youngest children, they may be taught by parents, not in public-school classroom settings. That is a legitimate (state) interest.”