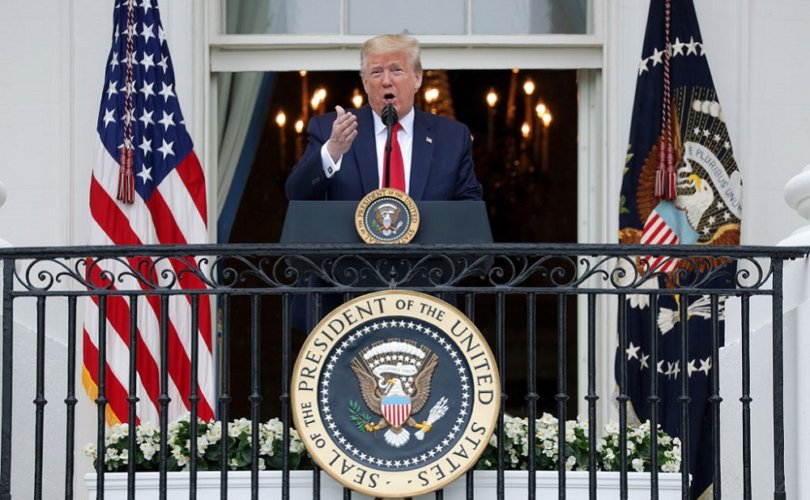 UNITED STATES, May 28, 2020  (LifeSiteNews) — U.S. president Donald Trump is set to sign an executive order regarding social media companies today, after strongly criticizing anti-conservative bias on Twitter in the past 24 hours.

Reuters correspondent Jeff Mason tweeted yesterday that the White House has confirmed that the order will be signed today, after press secretary Kayleigh McEnany informed reporters of the plans on board Air Force One.

Shortly after saying that, the White House now clarifies to reporters on AF1 that the order is to be signed tomorrow (Thursday.) https://t.co/THR2UOPtnW

The news follows a series of tweets by Trump attacking the anti-conservative bias of Twitter, after the social media platform posted a “get the facts” label on his recent tweets warning of the likelihood of voting fraud through mail-in ballots.

Last year, Twitter locked LifeSiteNews’s account for accurately identifying the male sex of Jonathan Yaniv, a Canadian activist who presents himself as a woman.

In the past 24 hours, Trump has accused Twitter of “interfering in the 2020 Presidential Election” and social media platforms generally of silencing conservative voices. He warned social media giants that his administration could “strongly regulate, or close them down” before promising “big action” later in the day.

….Twitter is completely stifling FREE SPEECH, and I, as President, will not allow it to happen!

….happen again. Just like we can’t let large scale Mail-In Ballots take root in our Country. It would be a free for all on cheating, forgery and the theft of Ballots. Whoever cheated the most would win. Likewise, Social Media. Clean up your act, NOW!!!!

Twitter has now shown that everything we have been saying about them (and their other compatriots) is correct. Big action to follow!

Big Tech is doing everything in their very considerable power to CENSOR in advance of the 2020 Election. If that happens, we no longer have our freedom. I will never let it happen! They tried hard in 2016, and lost. Now they are going absolutely CRAZY. Stay Tuned!!!

Florida congressman Matt Gaetz announced on his regular podcast yesterday that he is working on legislation that would remove the legal immunity that social media companies currently enjoy, because the law classes them as platforms rather than publishers.

“I am currently working with my Republican colleagues on the Judiciary Committee to craft legislation to say that if you’re going to opine as to the truth or falsity of that which is put on your platform, for the sake of its viewers, you don’t get the protection of Section 230. You are not a platform. You are doing something else, you are editorializing,” Gaetz said.

Section 230 of the Communications Decency Act protects platforms like Twitter and Facebook from being sued for what their users post on the sites. Whereas news agencies and other publishers can face lawsuits for publishing libelous claims, social media platforms are currently exempt from such action.

Last week, Facebook punished conservative education organization PragerU with “reduced distribution and other restrictions” for “repeated sharing of false news” and “misinformation” when PragerU released a video disputing environmentalists’ claims about the decline of polar bear populations. The social media giant suppressed a quotation from St. Augustine last year, and in 2018, a Facebook spokeswoman admitted to suppressing and demonetizing posts deemed “false” by “our third-party fact-checkers.”