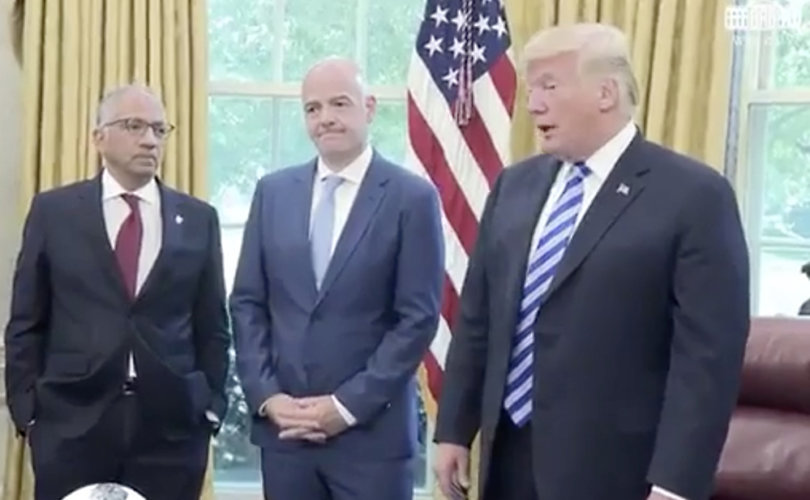 “Google search results for ‘Trump News’ shows only the viewing/reporting of Fake News Media. In other words, they have it RIGGED, for me & others, so that almost all stories & news is BAD,” Trump tweeted on Tuesday. “They are controlling what we can & cannot see. This is a very serious situation-will be addressed!”

See Trump responding to questions about Google in video below starting at 16 seconds into the video.

Google search results for “Trump News” shows only the viewing/reporting of Fake News Media. In other words, they have it RIGGED, for me & others, so that almost all stories & news is BAD. Fake CNN is prominent. Republican/Conservative & Fair Media is shut out. Illegal? 96% of….

….results on “Trump News” are from National Left-Wing Media, very dangerous. Google & others are suppressing voices of Conservatives and hiding information and news that is good. They are controlling what we can & cannot see. This is a very serious situation-will be addressed!

When pressed for clarification, White House economic adviser Larry Kudlow said only that “We'll let you know. We're taking a look at it,” Politico reports.

Politico’s Rebecca Morin claimed that the president “offered no evidence Tuesday to back up his claim that Google is favoring news that is critical of him and his administration,” and offered that “Many news outlets tailor their online content to Google's algorithms in an effort to secure placement at or near the top of search results.”

She did not mention that Trump appears to have been citing a Saturday PJ Media report in which Paula Bolyard performed a News search for “trump” on Google, then organized the results based on a chart of news outlets’ political leanings created by Emmy-winning investigative journalist and media bias critic Sharyl Attkisson.

“Looking at the first page of search results, I discovered that CNN was the big winner, scoring two of the first ten results,” Bolyard writes. “Other left-leaning sites that appeared on the first page were CBS, The Atlantic, CNBC, The New Yorker, Politico, Reuters, and USA Today (the last two outlets on this list could arguably be considered more centrist than the others).

21 results were from CNN, 11 from the Washington Post, and 11 from NBC. The only right-of-center news outlets to break the top 100 were the Wall Street Journal with three results, and Fox News Channel with two. She concluded that “left-leaning sites comprised 96 percent of the total results,” as Trump highlighted.

A Google spokesperson insisted that the company does not “bias our results toward any political ideology,” claiming its only goal is making sure users “receive the most relevant answers in a matter of seconds.

Eric Weinstein, a mathematician and economist who serves as managing director for Peter Thiel’s investment firm, responded that he found Google’s explanation “ominous” despite the fact that his personal politics “generally (though not always)” align with Google’s. He said his own experiments also confirm that Google searches are biased in a “fashion that is so transparently obvious as to be comical.

Google is just one of many leading internet companies accused of manipulating content on their platforms to benefit liberal ideas and suppress conservative arguments.

The White House has yet to release a specific proposal that can be evaluated, but the subject of a government response has already divided conservatives.

Others argue that social media censorship presents a grave enough threat to free expression that the state must step in. Fox News’ Tucker Carlson chided Republicans last week for refusing to act “because they’re free-market absolutists under the narcotic sway of the libertarian religion.”

Breitbart tech expert Allum Bokhari argues that “Competition is impossible when your website can be kicked off the internet, your app can be banned from smartphones, and your financial backers can be banned from supporting you through the web,” and Republicans “must act before the Democrats — who have no intention of preserving internet freedom, and in fact, want to restrict it – do.”

Some, such as Sen. Ted Cruz, R-TX, and University of Tennessee law professor Glenn “Instapundit” Reynolds, suggest Congress can protect conservatives’ free speech without infringing on that of social media companies by repealing those companies’ special immunity from liability for publishing libelous or otherwise illegal material, which is predicated on platforms being truly neutral.

Facebook and Google are ‘rigging’ the Irish abortion referendum

Not even liberal Google employees can escape pro-abortion harassment

Google ramps up its demonetizing of ‘dangerous’ LifeSite articles