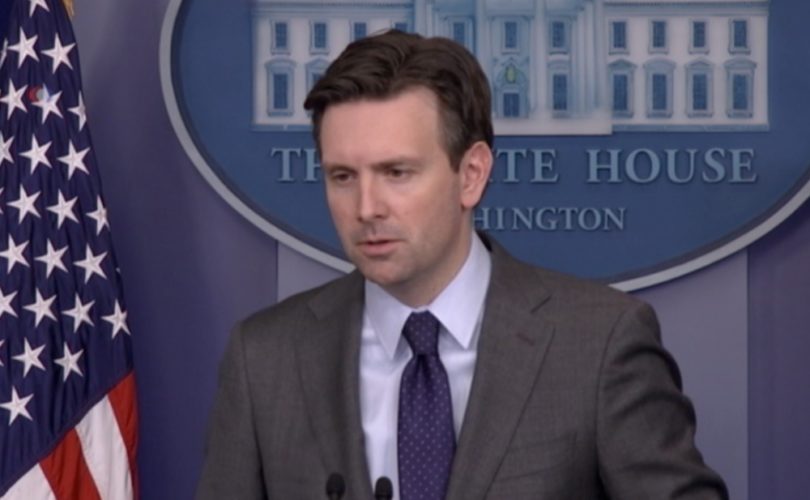 Well, this is awkward…“Planned Parenthood has apologized for the content of those videos, and they should. THEY WERE SHOCKING.”- Josh Earnest, White House Press Secretary

Posted by Americans United for Life on Thursday, September 17, 2015

WASHINGTON, D.C., September 17, 2015 (LifeSiteNews) – President Obama has not seen the undercover videos of Planned Parenthood – but his spokesman has.

Josh Earnest told reporters today the video footage – which among other things shows the dissection of a baby on camera – is “shocking.”

However, PPFA President Cecile Richards apologized only for the “tone” of Dr. Deborah Nucatola in the first video, saying her remarks about harvesting body parts over salad was not “compassionate.”

Earnest said Republicans had a deep “fascination” with Planned Parenthood – and depriving women of quality care.

“The policy being advanced by Republicans does nothing more than take away health care access for millions of families all across the country,” Earnest said. “I’m not really sure what the Republican fascination is with taking healthcare away from millions of American families, but it’s not something the president is going to agree with.”

“The way that Republicans, including some Republican candidates last night, have injected this ideological issue in the midst of the budget debate, has made it more difficult to reach a bipartisan budget debate,” which he said would have “significant consequences for our economy.”

Republican presidential candidates at the CNN debate last night said they wanted to defund the abortion industry, with most saying Congressional Republican leaders should threaten to let Obama shut down the government.

The videos, they said, have turned the tide of public opinion.

“Absolutely, we shouldn't be sending $500 million of taxpayer money to funding an ongoing criminal enterprise,” Sen. Ted Cruz said at the event, held at the Reagan Library in Simi Valley, California. “Republican leadership in both houses [of Congress] has begun this discussion by preemptively surrendering to Barack Obama” because he has promised to veto any bill that defunds Planned Parenthood.

In a rare moment of agreement, New Jersey Gov. Chris Christie stated, “We elected a Republican Congress to do this, and they should be doing it, and they're not. And they're giving the president a pass.”

The importance of defunding Planned Parenthood should make leaders reconsider procedural rules and protocols, some said.

Wisconsin Gov. Scott Walker called on Senate Leader Mitch McConnell to do away with the filibuster, which would allow legislation to pass with a simple majority vote. Democrats had done away with the measure during their years of control, but McConnell restored the legislation-blocking method when Republicans took the chamber back this year.

Walker said American voters “see the House and they see the Senate and they say, 'Why can't we pass this?”

Ohio Gov. John Kasich dissented, saying, “I'm sympathetic to the fact that we don't want this organization to get funding, and the money ought to be reprogrammed for family planning in other organizations.”

“The president of the United States is not going to sign this, and all we're gonna do is shut the government down, and then we're gonna open up, open it up. And the American people are gonna shake their heads and say, 'What's the story with these Republicans?'”

Kasich is under fire in his home state for not defunding Planned Parenthood, despite contacts from 60 pro-life organizations.

Obama’s spokesman was asked if he’d defund Planned Parenthood: this was his one word response