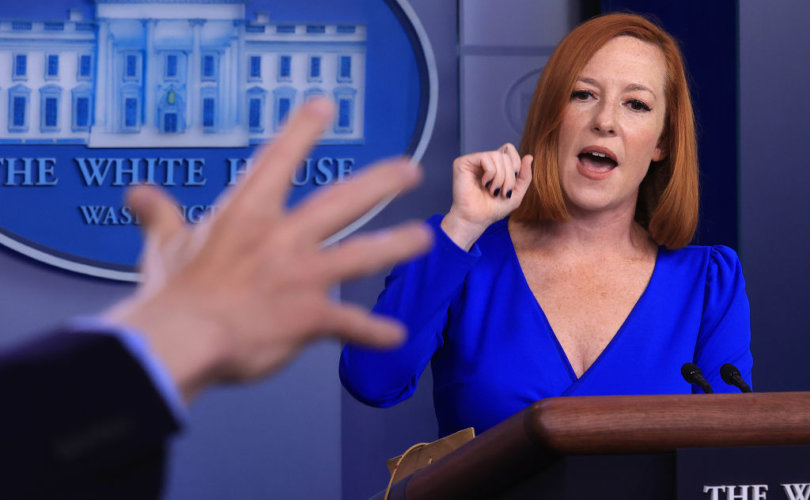 WASHINGTON (LifeSiteNews) — White House Press Secretary Jen Psaki on Wednesday tried to shut down a reporter after he asked her whether Pope Francis and President Joe Biden, America’s second Catholic president, will discuss abortion during their meeting Friday.

“The White House has said they will discuss working together on efforts grounded in respect for fundamental human dignity,” EWTN reporter Owen Jensen opened, then asking, “Will that include the human dignity of the unborn?”

Psaki asked about Biden’s upcoming meeting with Pope Francis: Will they discuss “the human dignity of the unborn?”

PSAKI: “You ask me most often, if not every time, about abortion…you can ask anything you want.” pic.twitter.com/Y52stYGrSh

Psaki initially responded to Jensen by deriding his line of questioning, stating that he asks her “most often, if not every time, about abortion.” Instead, Psaki shifted her focus away from abortion and onto topics about which both the Pope and president share “a great deal of agreement.”

“There’s a great deal of agreement and overlap with the president and Pope Francis on a range of issues — poverty, combating the climate crisis, ending the COVID-19 pandemic — these are all hugely important, impactful issues that will be the centerpiece of what their discussion is when they meet,” informed Psaki.

She acknowledged that Friday’s audience will mark the fourth occasion in which the two powerful men have met, stating an expectation that they will have a “warm and constructive dialogue.”

Later answering Jensen’s original question more directly, Psaki said, “You are familiar with where the president stands. He’s somebody who stands up for and believes that a woman’s right to choose [abortion] is important. The Pope has spoken differently.”

Psaki immediately attempted to move on to field questions from other reporters, saying, “I have just outlined for you what the focus of the meeting will be. I think we’re going to have to move on,” but Jensen was able to interject with a follow-up.

“The Pope has said abortion is murder and it’s like hiring a hitman. Does the president agree or disagree with that?” he asked.

Psaki reiterated Biden’s ardently pro-abortion stance, again saying, “You know that the president believes in a woman’s right to choose [abortion],” and insisting that people should be “very familiar” with his view.

Indeed, Biden has made his position on abortion clear, outlining his strong favor of maintaining Roe v. Wade and support of access to abortion “under any circumstance.”

During his 2020 presidential campaign, Biden decried the attempts of Republican lawmakers to overturn Roe, declaring that “[i]t’s wrong. It’s pernicious. And, we have to stop it.” He vowed to “codify Roe v. Wade” if he was to take the president’s office, adding, “my Justice Department will do everything in its power to stop the rash of state laws that so blatantly violate a woman’s protected, constitutional right to choose [abortion].”

The U.S. Constitution makes no mention of abortion.

Although describing himself as a “devout Catholic” and seen to attend Holy Mass, Biden stands at odds with the perennial teaching of the Catholic Church on abortion.

The Catholic Church holds that abortion “is gravely contrary to the moral law” and “constitutes a grave offense.” “The Church attaches the canonical penalty of excommunication to this crime against human life,” according to the Catechism of the Catholic Church.

“In the case of an intrinsically unjust law, such as a law permitting abortion or euthanasia, it is therefore never licit to obey it, or to ‘take part in a propaganda campaign in favor of such a law, or vote for it,’” Pope John Paul II declared in his 1995 encyclical, Evangelium Vitae. A doctrinal note approved by John Paul II in 2002 reiterated that it is “impossible” for Catholics to promote pro-abortion legislation.

Despite the president’s clearly anti-Catholic position, the Pope has entertained Biden at the Vatican and, according to Biden, has even given the ardent abortion supporter Holy Communion. Speaking after being denied Communion in 2019 by a priest in South Carolina, Biden said: “It’s not a position that I’ve found anywhere else, including from the Holy Father, who gives me Communion.”

Pope Francis said as part of an in-flight interview last month that denying even an obstinately pro-abortion politician communion is a “political” and not “pastoral” act, advising clergy, “If you say you can give or not give [the Eucharist], this is casuistry.” He added that he has never denied Holy Communion to anyone.

The Pontiff made no mention of abortion while meeting with Speaker of the House Nancy Pelosi on October 9, instead reportedly focusing on his encyclical Laudato Si’, which Pelosi’s representatives praised as “a powerful challenge to the global community to act decisively on the climate crisis,” as well as his call to lift up “those who have been left out or left behind, especially in the time of COVID.”