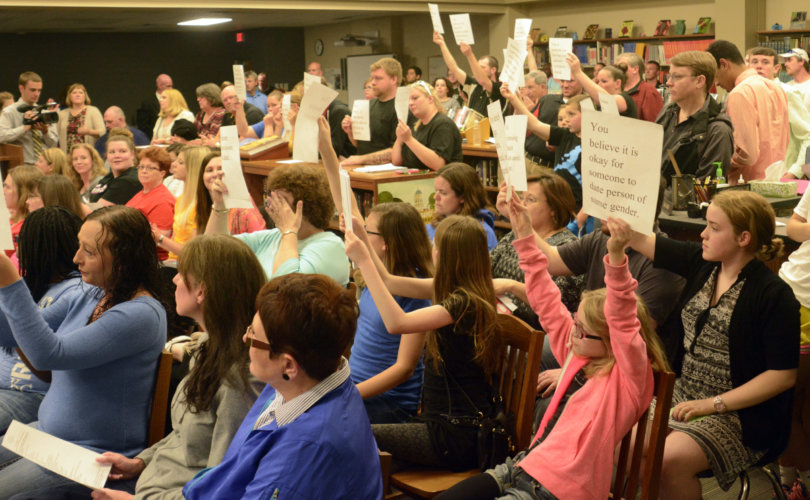 WASHINGTON, D.C. (LifeSiteNews) — White House officials worked in coordination with leaders of the National School Boards Association (NSBA) on a letter sent to President Joe Biden that called for stricter oversight and targeting of activists, including parents who attend local school board meetings and voice opposition to curriculum choices and COVID policies such as mandatory masking, according to a Fox News report.

The letter led to a directive from Attorney General Merrick Garland that federal law enforcement keep a closer eye on the alleged “domestic terrorism.” One example, cited by the NSBA letter, is Virginia parent Scott Smith, later identified as the father of a girl raped by a cross-dressing boy. The Loudoun County School Board denied the incident.

“Newly released internal emails reveal that the National School Boards Association coordinated with the White House and the Department of Justice before sending President Biden the notorious letter that compared concerned parents to domestic terrorists,” Fox News reported. “Emails provided to Fox News show that NSBA had coordinated with the White House for weeks beforehand.”

Parents Defending Education, a right-leaning group that advocates for parental control in the schools, released a series of emails and memos that it obtained through public records requests and released on November 11.

The State Association Executive Directors were informed on September 14 that NSBA staffers had met with the White House about a letter.

Two weeks later, the NSBA sent its letter on September 29. The original letter has been removed from the group’s website but is archived here.

Emails from Pam Doyle of the Alabama Association of School Board to Viola Garcia, the Secretary-Treasurer of the NSBA, give more details.

The October 11 email shows the fallout from state members. “We have members looking at dropping out of NSBA because of the letter to the President,” Doyle said.

“[T]he origin of the letter began September 14th with a meeting with the White House staff, but fails to specify who met with the White House staff,” Doyle wrote in the email. “It goes further to say ‘NSBA’ was preparing a letter to send to the President, failing once again to state the person that was preparing the letter, only an entity – NSBA.”

“The members asked specifically who wrote the letter, by what authority the letter was written, and who or how many states asked for federal intervention,” Doyle said.  “This letter fails to adequately answer the specific questions about the lack of input from the members and Board in the letter to the President.”

The backlash over the White House-NSBA letter continues to hit the national organization, even after the group tried to walk back its demand for federal aid against parents.

“More than half of state school board associations have distanced themselves from the national association after it sent a letter to President Joe Biden asking for federal intervention to investigate parents who protest at local meetings,” The Center Square reported. “Of the 26 that have repudiated the letter, 11 have discontinued their membership with the National School Boards Association after Kentucky did so Wednesday.”

Congress is getting involved too.

“Republican Reps. Jim Jordan of Ohio and Virginia Foxx of North Carolina are seeking access to communications between the Department of Education and the National School Boards Association over a letter from the latter comparing protesting parents to domestic terrorists,” the Washington Examiner reported.