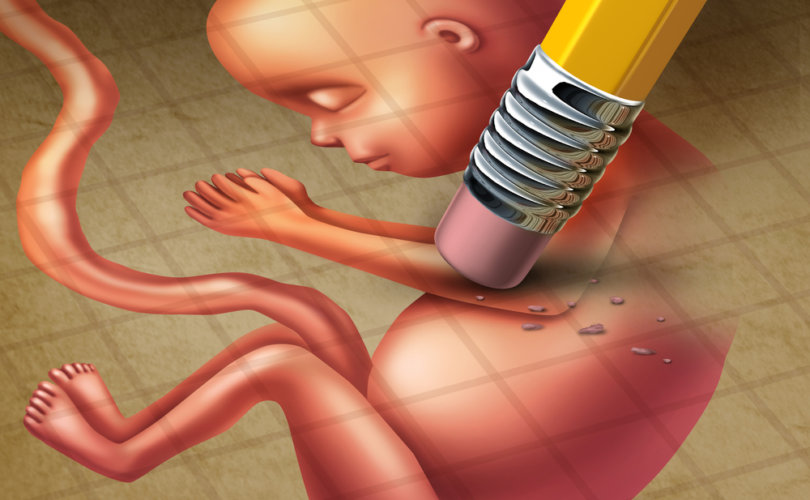 (LifeSiteNews) – The World Health Organization (WHO) released new guidelines on promoting abortion around the world, calling for an end to “criminalization” and for an ban on any laws that restrict abortion, thus opening the door to sex-selective abortion and abortion up to birth.

Released March 9, the new 170-page handbook from the WHO is entitled “Abortion care guideline.” Drawn up “in a bid to protect the health of women and girls and help prevent over 25 million unsafe abortions that currently occur each year,” the guidelines call for the widespread removal of numerous safeguards that prevent abortion.

The WHO describes the safeguards as “medically unnecessary policy barriers to safe abortion,” and recommends removing “criminalization, mandatory waiting times, the requirement that approval must be given by other people (e.g., partners or family members) or institutions, and limits on when during pregnancy an abortion can take place.”

These are “barriers,” the WHO wrote, that “can lead to critical delays in accessing treatment and put women and girls at greater risk of unsafe abortion, stigmatization, and health complications, while increasing disruptions to education and their ability to work.”

‘Criminalization’ or abortion is ‘gender-based violence’

Linking the “criminalization of abortion” with “forced abortion … denial or delay of safe abortion care and/or post-abortion care, and abuse and mistreatment of women and girls seeking SRH information, goods and services,” the WHO declared that all such actions would be “forms of gender-based violence” that “may amount to torture, cruel, inhuman or degrading treatment.”

The WHO also demonstrated its allegiance to LGBT ideology in the text, referring often to a “woman, girl or other pregnant person.” The summary noted that while the word “woman” was used more commonly, it was only for brevity.

Among the more than 50 policy recommendations the guidelines presented as an appeal to legislators were the following:

Writing in the Mail on Sunday, Carla Lockhart – a member of Parliament (MP) for Northern Ireland’s Democratic Unionist Party and chair of the All Party Parliamentary Pro-life Group (APPPG) – slated the WHO of “campaigning for the most extreme of positions.”

“Why has it [WHO] taken such a hard-line view which pretends a baby has no humanity until it breathes its first breath?” she asked.

Excellent from @carlalockhart – calling on the WHO to recall its extreme abortion guidelines that are out of step with everyday citizens. The WHO wants abortion on demand up till birth. A recent BBC survey shows that only 1% of British women would agree. https://t.co/kQ4CMapq0q

Lockhart was echoed by Fiona Bruce MP, co-chair of the APPPG, who called the handbook “completely unacceptable” and “truly shocking.”

“A viable human being could have his or her life ended up to the point of birth. Yet a day, an hour, even moments later, similar action against a child could constitute murder,” Bruce observed.

Commenting on this long list of pro-abortion “experts,” Lockhart wrote, “If one looks at the list of ‘experts’ it chose to consult ahead of issuing its new guidelines, a clue emerges.”

“For the panel includes numerous individuals who work for major abortion providers or lobby groups, including two of the largest abortion providers in the world – MSI Reproductive Choices (formerly Marie Stopes International) and Planned Parenthood.”

“It appears to have been written, to all intents and purposes, by the abortion industry,” she added. “The WHO has allowed itself to be hijacked by these extremists.”