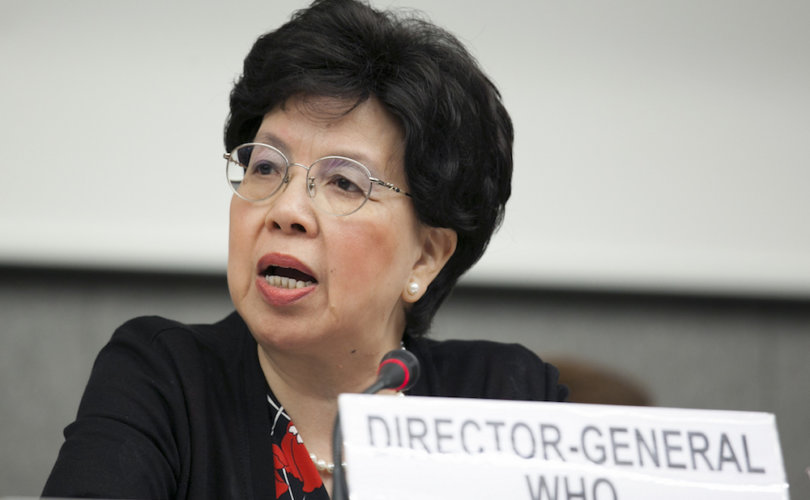 Urge the UN to stop using Zika to promote abortion! Sign the petition.

GENEVA, Switzerland, May 24, 2016 (LifeSiteNews) – The Zika virus outbreak points to the need for abortion and contraception in developing countries, the director of the World Health Organization (WHO) told the group’s decision-making body at its annual meeting on Monday.

“Zika reveals an extreme consequence of the failure to provide universal access to sexual and family planning services,” said Dr. Margaret Chan, WHO’s Director-General at WHO’s 69th World Health Assembly.  “Latin America and the Caribbean have the highest proportion of unintended pregnancies anywhere in the world.”

Infected mosquitoes primarily transmit the Zika virus, which is often unnoticeable for those it infects.  It can cause mild symptoms such as fever, joint and muscle pain, or headache.

“Most people infected with Zika virus won’t even know they have the disease because they won’t have symptoms,” according to the Centers for Disease Control (CDC).

In April, the CDC said that Zika can cause microcephaly and other birth defects.  Microcephaly causes babies to be born with undersized heads and neurological problems.

The United Nations and abortion advocates have used the Zika outbreak to push for the expansion of abortion and contraception in Latin America, where the virus is prevalent.  Most Latin American countries have laws in place protecting babies from abortion.

UN human rights chief Zeid Ra’ad al-Hussein has previously said that abortion and contraception laws in areas affected by Zika should be reviewed and governments should “ensure women, men and adolescents have access to comprehensive and affordable quality sexual and reproductive health services and information, without discrimination.”

“Comprehensive sexual and reproductive health services include contraception…and safe abortion services to the full extent of the law,” a news release from his office said.

Chan lamented the confirmation that Zika has been linked to microcephaly as a “devastating diagnosis for pregnant women and a significant threat to global health.”

Chan called the reemergence of Zika after six decades a “global health emergency” and warned that “for infectious diseases, you cannot trust the past when planning for the future.”  She advised women of childbearing age to delay pregnancy, avoid mosquito bites, and avoid traveling to places where the virus is prevalent.

At its meeting this week, World Health Assembly will vote on adopting strategies to combat the spread of sexually transmitted diseases that are “fully aligned with the [United Nation’s] 2030 Agenda for Sustainable Development.”  The proposed strategy is “also aligned with other key WHO global health strategies and plans, including those for sexual and reproductive health” and “makes a strong case for expanding the provision of good quality sexually transmitted infection prevention and care more widely into the areas of primary health care, sexual and reproductive health, and HIV services.”

One of the aims of the UN’s sustainable development goals is to “ensure universal access to sexual and reproductive health-care services, including for family planning, information and education, and the integration of reproductive health into national strategies and programmes.”