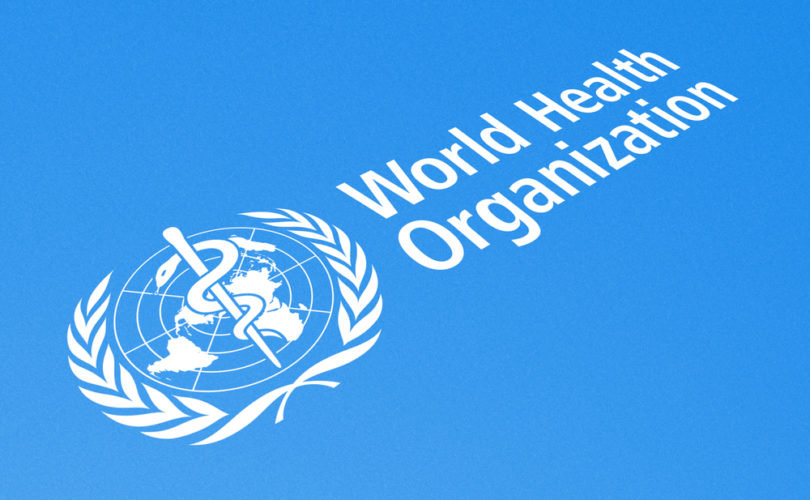 April 1, 2021 (LifeSiteNews) — In the middle of Holy Week, five days from Easter, the World Health Organization’s regional office for Europe published a communiqué calling for religious celebrations to be down-sized throughout the continent.

Under the title “Minimizing COVID-19 risk around religious celebrations as European Region sees resurgence of cases,” the international organization headed by Tedros Adhanom Ghebreyesus — a pro-abortion, former communist party member and revolutionary in his home country, Ethiopia — called for specific measures for all believers, suggesting that religious functions and related family reunions would be aggravating factors in the present health crisis.

In a show of gross interference with religious traditions, WHO Europe published its guidelines for what could be dubbed responsible worship. While its directives are not mandatory, pressure is being applied to Europeans, under the guise of direct advice to citizens, so that they submit to restrictions and even stay ahead of them. The communiqué can also be expected to affect decisions by governments across the continent who are in practice being encouraged to take measures against public worship.

The WHO statement opens with these words: “Faith can be a source of support, comfort and guidance particularly in times of COVID-19, and springtime is rich with religious celebrations, including Passover, Easter and Ramadan” (Ramadan starts on April 13 this year).

But in the view of the World Health Organization, real hope can only come from the vaccine: “Currently everyone is experiencing a mix of frustration and hope, as vaccine coverage remains low but early signs of vaccination impact appear. While some of the most vulnerable people have received a vaccination against COVID-19, a large majority remain at risk of infection.”

The WHO is calling on religious believers’ sense of duty and their altruistic virtues to justify the ongoing tyranny, while at the same time trying to direct and frame public worship — even when supermarkets and public transport are allowed to remain open, including on Sundays.

The mention of Passover and Ramadan by the WHO should not hide from view the fact that Europe is fundamentally Christian in its roots, culture, and soul. In more Catholic times, pandemics — so much more deadly than COVID, which spares over 99.9 percent of the population — led to collective prayers and penitential processions. Examples abound of plagues that were stopped by divine intervention, such as the Great Plague in Marseille in 1720, which only ceased for good two years later, when the saintly bishop François-Xavier de Belzunce led public prayers, joined by the aldermen of the city, to consecrate the town and its inhabitants to the Sacred Heart of Jesus.

Now the global authorities are instead encouraging people to stay at home, or to reduce and even to “postpone” religious celebrations, as if Easter did not matter, and as if public worship should obey to the injunctions of the powers that be. All this for a virus that leaves the vast majority of the population unharmed.

“Communities across the European Region are weighing whether to host religious or social celebrations during this time. In countries experiencing widespread community transmission of the virus, virtual meetings, postponing or reducing such gatherings should be seriously considered.

“Regardless of location, any religious service should be held outdoors wherever possible or be limited in size and duration, with physical distancing, ventilation, hand hygiene and mask use, as appropriate. A preferred option is for people to celebrate with those they live with, and not meet with others if feeling unwell or if required to stay in isolation or quarantine,” said the WHO.

— Article continues below Petition —
PRAY IN REPARATION: Sony's new movie 'The Unholy' blasphemes the Blessed Virgin Mary
Show Petition Text
5662 have signed the petition.
Let's get to 6000!
Thank you for signing this petition!
Add your signature:
Show Petition Text

It is of course reasonable to advise people who are actually ill to stay at home — but does Europe (and do Christians) really need the World Health Organization to tell them so?

WHO Europe is also weighing in on “indoor gatherings,” warning that “even smaller ones can be especially risky because they bring together groups of people, young and old, from different households, who may not all be adhering to the same infection prevention measures.”

“If organizing a small gathering or event, follow local recommendations on the maximum number of participants and take precautions to prevent the spread of COVID-19 among guests. It may feel awkward to wear masks and stay physically distant when around friends and family, but doing so contributes significantly to ensuring that everyone remains safe and healthy,” it says.

Finally, the World Health Organization also recommends avoiding “unnecessary travel”: “If travelling is the only way to visit family and friends, avoid any transportation that might be crowded. Consider all related risks and ask yourself whether travel is an absolute necessity.”

But government authorities, in France at least, take no notice of the WHO’s recommendations against public transportation: The Paris underground daily welcomes crowds to its platforms and trains, with no limitations.