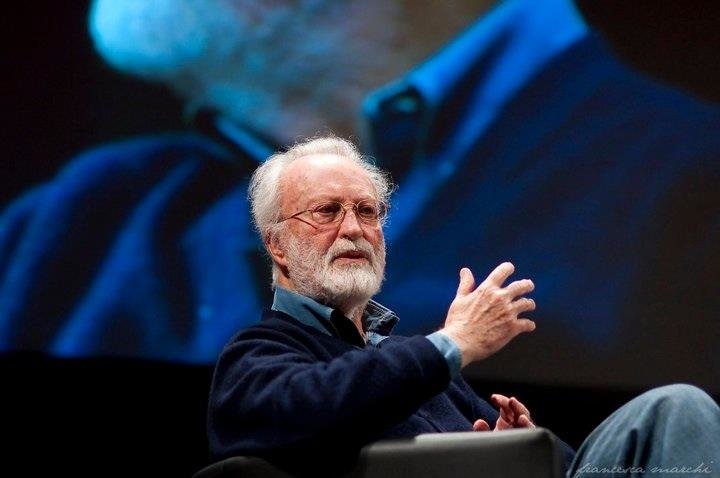 On July 13, Eugenio Scalfari published his third conversation with Pope Francis for La Repubblica in the last ten months. And again the remarks he attributed to the pope generated widespread controversy. Scalfari admits the interviews are “reconstructions” from memory – he takes no notes and does not use a recorder. After each of Scalfari’s reports, the Vatican has had to issue clarifications stressing that the quotes are not accurate.

As non-Italians attempt to interpret these interviews and assess their significance, what might be missing for many is the background of this man who is interviewing the pope. Though the name Eugenio Scalfari is instantly recognizable to any literate Italian, it was nearly unknown in the English-speaking world until the first of the articles appeared in the fall of 2013.

So who is Eugenio Scalfari?

Most North American commentators have been calling him some variation on “veteran Italian journalist,” and many have noted his atheism, but to Italians he is much more.

The founder of La Repubblica and its editor from 1976 to 1996, Scalfari served as a member of Italy’s Chamber of Deputies from 1968-1972, was one of the founders of the leftist and anti-clericalist Radical Party in 1955, and is regarded as having been one of the leading voices in the drive to legalize divorce and abortion.

“In Italy Eugenio Scalfari is the symbol of secularism and of anti-clericalism,” Riccardo Cascioli, editor and the director of the Catholic opinion paper La Nuova Bussola Quotidiana, told LifeSiteNews. Scalfari’s is an “expression of a radical-bourgeois class, which for these forty years has led La Repubblica to conduct all of the major anti-Catholic battles,” from abortion to artificial procreation and the imposition of taxes on Church organizations that Cascioli said discriminate against schools that do not follow the state.

“La Repubblica has never missed an opportunity to throw mud on the Church,” said Cascioli. “Despite this, or perhaps because of it, La Repubblica is certainly the most widely read newspaper by ‘progressive’ Catholics, and in those same environments Scalfari is treated with the utmost respect.”

He is also a “very famous journalist with the ambition to also be a philosopher,” Cascioli added. After Corriere della Sera, La Repubblica is “Italy’s second newspaper in terms of sales,” he said, which gives Scalfari a permanent platform in Italian politics. Though having stepped down as editor, Cascioli says Scalfari remains the paper’s main editorial writer.

Throughout his long political career, Scalfari has “been everything” politically, said Antonio Margheriti Mastino, a journalist who writes for the newspaper Libero Quotidiano. Early in his career Scalfari was associated with the Italian fascists and “became anti-fascist when the regime fell,” Mastino told LifeSiteNews. “He then turned Republican and then radical/liberal since the 1950s.”

“He became communist in the seventies, when the Communist Party seemed to be going to win the elections. In the Eighties he became a Christian Democrat supporter; in the Nineties he opposed the socialists and Christian Democrats when these two parties fell,” Mastino said. Since then, he has become “the spiritual teacher of the Left,” with his columns ironically nicknamed “High Mass on Sunday.”

Scalfari was also one of the founders of the Radical Party, aptly named for holding a place so far to the left that it would simply fall off the scale of American, Canadian or British political opinion. It has no legitimate mainstream political equivalent in the Anglo countries.

The Radical Party of Italy describes itself as “liberal” and “transnational,” pro-EU and UN, “anti-prohibition” – meaning it opposes the criminalization of recreational drugs – and strongly pro-abortion and pro-euthanasia. On Italian domestic policy, the Radicals work tirelessly to discredit the Catholic Church and particularly for the repeal of the Concordat, the law that recognizes the Holy See as independent of the Italian state. The party lists its “important values” as “secularism, “environmentalism,” “Europeanism,” and “Atlanticism.”

While its policies are too radical for most voters, the party serves to pull the general tenor of Italian politics further to the left. Indeed, so extreme are its policies that it generally only succeeds in taking seats at the municipal and regional elections. The notable exception is Emma Bonino, a former illegal abortionist, who was appointed by a recent coalition government as Italy’s foreign minister.

By the late 1960s, Scalfari had won a seat in the House of Deputies under the more respectable flag of the Socialists until the end of his single term in 1972. Mastino said it is now the “full spectrum” of the left that Scalfari represents and not only this or that particular party, a move that has been criticized by the Radicals. Mastino said that while Scalfari’s direct involvement in the party politics of the left may now be informal, he and his newspaper remain the extreme movement’s national mouthpiece.

He is, Mastino said, the original “champagne socialist,” a man “well-off, moralistic, and a radical liberal.”

“The important thing to remember about him is that he has guided La Repubblica to be the second [most prominent] Italian national newspaper and the newspaper of the entire left, especially the radical-liberal and anti-Berlusconi left. La Repubblica has been at the head of the cultural battles to change the country to match the goals of the radical and liberal left, and to change the Church into the direction of the ‘progressives’ and liberals.”

The 90 year-old Scalfari’s political influence over several decades was described on Ilsussidiario.net as “a blaze of success, starting as a journalist, followed by a satisfying career as a writer until landing in politics.”

“His articles have been true social complaints, which have found their highest expression in the emergence of some important referendums such as ones on abortion and divorce.”

Gianfranco Spadaccia, writing for Radio Radicale, the media arm of the Radical Party, criticized Scalfari’s journalistic success while acknowledging his “leading role” in pushing Italy towards the left as “a person who believes in the power and influence of press organs.” “First with ‘L’Espresso and then with La Repubblica Scalfari’s motto has always been that of publishing not ‘a’ but ‘the’ ‘newspaper of the leading class’.”

Scalfari gained huge popularity in Italy for his steady stream of critical editorials of the hated Silvio Berlusconi that are thought to have greatly contributed to the former Prime Minister’s political downfall. More recently, Scalfari has used that influence to push Italy into accepting artificial procreation procedures, and particularly opposed Pope Benedict’s efforts to limit the law allowing them.

But behind the topical news hooks of IVF and embryo implantation has always stood his foundational opposition to any influence of the Church in the public life of Italy, a driving motive of the Radicals across Italy and Europe.

In 2008, he responded to the suggestion for a more restrictive abortion law, saying, “With regard to the law on abortion lay people believe that it protects conscious motherhood and freedom of choice for women. I am also in favor of increasing the flow of information that should be provided to women about the possible effects of abortion as well as on artificial insemination,” Scalfari wrote. “Everything else, beginning with the so-called moratorium, is totally abhorrent. It's a pure propaganda tool to equate abortion, allowed only at certain times and circumstances, with the death penalty.”

His influence as a pioneer in political journalism has been acknowledged for some time. In 2008, long before non-Italian Catholics learned his name, the notable Norwegian journalist Per Egil Hegge said that Scalfari “will always occupy an important place in Italian media history, and not only because he established and founded the daily newspaper La Repubblica in January 1976, which represented a completely new departure in the history of the Italian press: it was independent of any political party.”

“The paper he founded was a left-leaning liberal publication, which recruited staff from the Italian left, and particularly from the intellectual circles with varying degrees of ties to Enrico Berlinguer’s Communist party,” Hegge wrote.

“Had he been writing in English, there is little reason to doubt that he would have been world-famous,” he added.