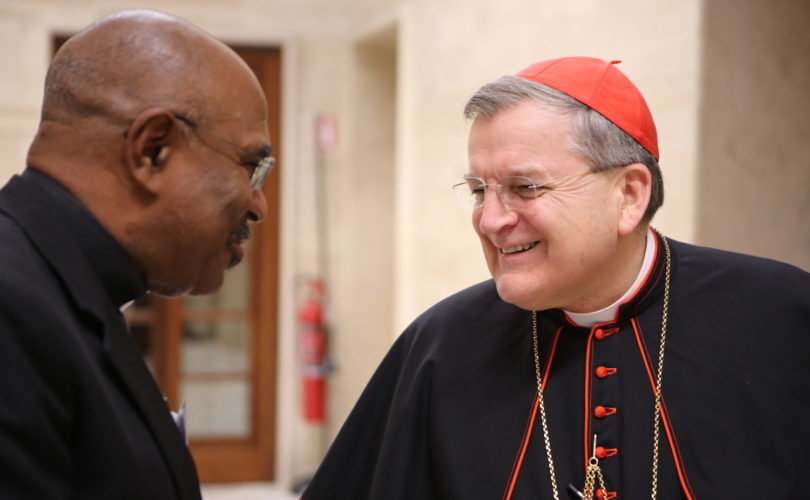 Can you guess who said this? “LifeSiteNews has been by far… the greatest asset in fighting the culture of death.”

Before I tell you the answer, I want to give you a little background.

Last week, I received a Facebook message inviting me to come to Moscow, Russia to speak at a pro-life conference in September.

I just returned home from a speaking trip to Iowa last week, and recently travelled to Rome, California, England, Texas, Florida and Washington, DC, just to name a few places.

With eight children at home, the oldest still only 17, such requests are a tall order, never mind the added strain on the LifeSiteNews staff in my absence.

But since LifeSiteNews was founded 18 years ago, we've taken up the challenge to report on and to go where we’re called.

Steve Jalsevac, John Jalsevac and Patrick Craine have also become involved in responding to the international demands of our mission, travelling to various destinations to speak or cover crucial assignments.

We have become a truly international news service and action-motivator, increasingly in demand.

Help us continue to bring our pro-life and pro-family news coverage to the world. Click here to donate to our summer campaign.

Our international focus came from the recognition long ago that this fight for life and family is a global affair; it is in fact a world war.  Strategies to advance the culture of death, and cripple the traditional family have been the matter of international planning and strategy for decades.

But, let’s get back to who said that quotable quote about LifeSiteNews.  First off, let me assure you it was not an employee of LifeSiteNews. It was not my good wife, my brother, or even my best friend.

It was a well-known pro-life leader.  A pro-life leader who, along with many other leaders, traveled to Rome from all over the world for the first Rome Life Forum – an international strategy meeting organized by LifeSiteNews for pro-life leaders held on May 3, 2014, just steps from St. Peter's in Vatican City.

Speaking from the podium of the Forum, Michael Hichborn, director of American Life League’s Defend the Faith project, said:

I just wanted to say that this whole conference would not have been possible without LifeSiteNews. I work for American Life League and have been working with them for the last seven years and LifeSiteNews has been by far our greatest ally and probably the greatest asset in fighting the cultural of death. They have been on the front lines every single day, fighting against abortion, birth control, contraception homosexuality and every other affront to human life.

The Rome Life Forum was an initiative we believed would benefit the awesome leaders we know in many countries around the world. A meeting where they could get to know one another, trust one another and collaborate to advance a culture of life.

(See a slideshow of the leaders in attendance, and some of the highlights and activities from that Rome conference above, or by clicking here.)

As with most things at LifeSiteNews, we began the Rome Life Forum with humble expectations. We were hoping for perhaps 30 leaders to come to Rome for the first such strategy session.

Amazingly, 74 leaders showed up from all over the world! They came from Australia, New Zealand, the U.S., Latin America, Lebanon, and numerous other countries in eastern and western Europe.

The Vatican’s Cardinal Raymond Burke spoke at the public portion of the meeting, as did the famed biographer of Saint John Paul II, George Weigel.

Have a look at this video of some of the outtakes from the public portion of the meeting.

Beginning with Cardinal Burke, who received lengthy applause when he noted that pro-abortion politicians should not receive Holy Communion, the video presents a couple of highlights from George Weigel’s talk, and various other snippets from several of many brief presentations by the leaders present.

One particularly powerful presentation near the very end of this video was by two young ladies from Croatia. Inspired by other examples of referenda on traditional marriage as well as the 40-Days For Life campaign, they promoted a Croatian referendum stating that marriage is between one man and one woman. It was opposed by the government and the media, but passed nonetheless.

In what they described as a ‘miracle,’ they collected over 450,000 signatures in two weeks in a country with only 4.5 million people. They had over 6,000 volunteers, comprised mostly of young people!

Those kinds of messages of hope for the future are an inspiration for all of us to continue in this work.

The setting of the conference and the testimony and conviction of the pro-life leaders present at the Forum brought home a powerful message about that this war we are in. This battle for a culture of life is at heart a spiritual battle.

More than coordinated international forces strategizing to advance a culture of death, we’re up against ‘principalities and powers’ that require prayer and fasting, if we are to defeat them with the help of Almighty God.

You, the supporters of LifeSiteNews are to be congratulated for these victories, for these ventures to unite the forces of good to work and pray together.

Your prayers for LifeSiteNews, your offerings of your time and treasure and your commitment to this work have achieved many victories. Without you LifeSiteNews could never have organized the conference, nor attained the credibility to attract pro-life leaders from all over the world.

You deserve the praise of Cardinal Burke, who opened his speech saying, “First of all, I wish to thank the organizers of today’s international meeting for the promotion of the apostolate of respect for human life.” He added, “It is my desire, by my presence and with my words, to pay tribute to your tireless work in defending and fostering the inviolability of innocent and defenseless human life from the moment of conception until the moment of natural death.”

And for those of you who have been reading us for some time, but have not yet supported LifeSiteNews, I’d ask you to take heed of these parting words from American Life League’s Michael Hichborn about our work, given impromptu at the Rome Life Forum:

“I just want to ask you to please pray for these good folks. They desperately need your prayers and if you can, I would ask you also to give donations to LifeSiteNews. Without them we couldn’t do what we do.”