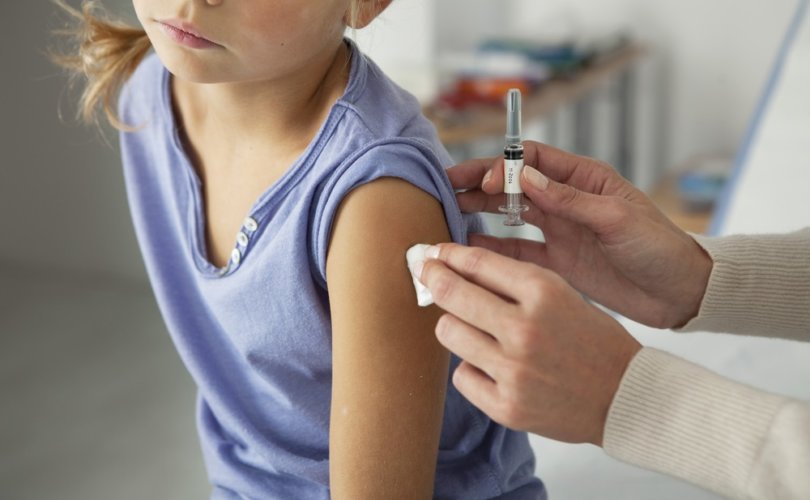 October 16, 2020 (LifeSiteNews) — A pro-life organization has provided clear guidance on the unethical nature of mandatory vaccines and those made from the cells of aborted babies, declaring them “morally unacceptable.”

After months of research, the Personhood Alliance has issued its official position on the moral ethics of vaccinations in the form of ten key points. The guidelines affirm as grounding principles “the rights of born persons not to be forced to violate their own bodily integrity and/or moral conscience and the rights of pre-born persons not to be trafficked, commodified, and/or experimented upon without their consent.”

The Personhood Alliance notes that many companies are making use of the cells of aborted babies in order to produce vaccines and links to an extensive study of vaccines made using aborted fetal cell lines. All such vaccines are termed “unethical vaccines,” and the Alliance calls on pharmaceutical companies, stating that “more must be done to produce ethical vaccines … and demand ethical alternatives of more companies, particularly when taxpayer funding is involved.”

The Alliance also makes reference to those even in religious circles who advocate for vaccines, even if they are manufactured using aborted fetal cells. The document refers to such positions thus: “These arguments include, but are not limited to, the amount of time that has passed since the original abortions and the intent of the original abortions not being for vaccine production.”

In response to these arguments, the Personhood Alliance declares: “We find these arguments to be in error. Christians must demand an end to the trafficking and commodification of human beings at all stages of life and must not participate or accept practices that perpetuate and encourage the relationship between abortion, biomedical science, and human trafficking, no matter when that connection was initiated or how long a practice has been socially accepted.”

The paper continues: “The production and testing of vaccines using the remains of aborted human beings, regardless of manner of conception and without their consent, is morally unacceptable and must be opposed. The Personhood Alliance strongly urges the rejection of such vaccines.”

Additionally, the document deals with the question of mandatory vaccines, declaring such a policy “unethical and intrusive”: “The right of bodily integrity and the right to refuse medical treatments for moral, religious, health, or other reasons, must remain intact and protected by law when an individual considers whether to vaccinate or not.”

In fact, the Alliance teaches that to force a vaccination upon people is a “violation of their biblical personhood,” since it contravenes the duty of care for the body, which “God has given us as a temple of the Holy Spirit.”

Consequently, the document declares that vaccines made from the cells of aborted infants are completely unethical: “the production of a vaccine or any medical therapy derived from the remains of a human being intentionally killed is wholly unethical and should be made unlawful. The Personhood Alliance affirms the inalienable right to life of pre-born human beings, regardless of the manner of conception, and thus, their right not to be trafficked, commodified, and/or experimented upon.”

Furthermore, regarding mandatory vaccines, the Alliance “affirms the rights of all people to refuse medical treatment and to reject violations of their and their family members’ bodily integrity, moral conscience, and Constitutional protections through forced or coerced vaccines.”

The declaration presented by Personhood Alliance is mirrored in the statements of a number of notable Catholic clerics.

Bishop Joseph Strickland of Tyler, Texas has repeatedly called to halt production of vaccines using aborted babies. He tweeted in April that “if a vaccine for this virus is only attainable if we use body parts of aborted children then I will refuse the vaccine…I will not kill children to live.”

The bishop publicly re-issued this rejection of such vaccines: “I renew my call that we reject any vaccine that is developed using aborted children. Even if it originated decades ago it still means a child’s life was ended before it was born & then their body was used as spare parts.”

In a public letter issued in May, Archbishop Carlo Maria Viganò along with Cardinals Mueller, Punjat, and Zen taught that “for Catholics it is morally unacceptable to develop or use vaccines derived from material from aborted fetuses.”

They further stated that “citizens must be given the opportunity to refuse these restrictions on personal freedom, without any penalty whatsoever being imposed on those who do not wish to use vaccines.” The letter has been signed by 22 prelates and priests, along with numerous journalists, doctors, lawyers, and academics. It has over 57,000 signatures as of writing.

In an August letter directed to mothers, Archbishop Viganò once again affirmed the moral prohibition of using vaccines made from aborted babies. He wrote: “The common good pursued by the state in temporal things therefore has a well defined object that cannot and must not be in conflict with the Law of God, the Supreme Legislator. Every time that the State infringes on this eternal and immutable Law, its authority is diminished, and its citizens ought to refuse to obey it.”

The archbishop made mention of abortion and then added, “I am referring to the case in which a vaccine would contain fetal material coming from the bodies of aborted children.”

Viganò also decried the policy of mandatory vaccines: “we cannot remain silent if the public authority would make vaccines obligatory that pose serious ethical and moral problems, or that more prosaically do not give any guarantee of obtaining the promised effects and that are limited to promising benefits that from a scientific point of view are absolutely questionable.”

Most recently, Bishop Athanasius Schneider, an auxiliary bishop of Astana, Kazakhstan, gave an interview in which he stated that mandatory vaccines are “the last step of Satanism” to “legalize abortion globally — the killing of unborn babies — so that the entire planet will be collaborating in the process of killing babies through the vaccine which will use parts of aborted babies.”

Continuing, Schneider said that “we must resist very strongly against this, if it comes. We must even accept to be martyrs.”

The declaration from Personhood Alliance and the above teachings from Catholic bishops are in stark contrast to the July letter of the Catholic Bishops’ Conference of England and Wales (CBCEW), which stated that Catholics have “a prima facie duty to be vaccinated.” The letter, which received much criticism from concerned Catholics, continued by mentioning the “distress many Catholics experience when faced with a choice of not vaccinating their child or seeming to be complicit in abortion.”

The bishops quoted from a 2017 document from the Pontifical Academy for Life, which said “all clinically recommended vaccinations can be used with a clear conscience and that the use of such vaccines does not signify some sort of cooperation with voluntary abortion.”

The CBCEW also drew from a 2005 document from the Pontifical Academy for Life. That text stated that those who used unethical vaccines for their health “carry out a form of very remote mediate material cooperation, and thus very mild, in the performance of the original act of abortion, and a mediate material cooperation, with regard to the marketing of cells coming from abortions, and immediate, with regard to the marketing of vaccines produced with such cells.”

In the 2005 text, permission was granted to use vaccines made from aborted babies, “insomuch as is necessary in order to avoid a serious risk not only for one’s own children but also, and perhaps more specifically, for the health conditions of the population as a whole — especially for pregnant women.”

In a second letter released in September, the CBCEW then committed themselves to their position: “A vaccine will seek to protect the whole of society from this virulent virus. Individuals should welcome the vaccine not only for the sake of their own health but also out of solidarity with others, especially the most vulnerable.”

While no longer affirming that Catholics have a duty to be vaccinated, the bishops’ conference did state that “many may in good conscience judge that they will accept such a vaccine” — namely, one made using the “human remains of an aborted child in the past.”

Pope Francis recently called for vaccines to be “universal and for all.”

Archbishop Viganò explicitly mentioned the July letter of the CBCEW, stating that the bishops’ support for unethical vaccines lacked “any doctrinal authority.” He also expressed concerns about the Pontifical Academy for Life as well as its 2017 document: “When we consider the new orientation of the Pontifical Academy for Life … we cannot expect any condemnation of those who use fetal tissue from voluntarily aborted children.”