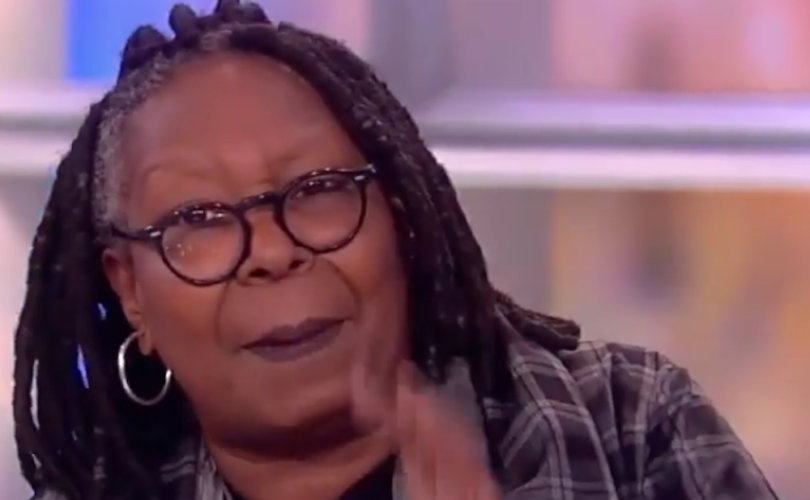 February 3, 2017 (LifeSiteNews) – Whoopi Goldberg doesn’t see the difference between President Trump and a terror group such as the Taliban.

“We have had a leader who's repeatedly demeaned women, wants to defund organizations that benefit women, calling on the media to shut up, specifically wants to give preferential treatment based on religion. Are these values really much different than the Taliban's?” the 61-year-old TV talk show celebrity asked on Tuesday on The View.

Show co-host Jedediah Bila shot back a scornful reply, reminding Goldberg that Islamic terror groups such as IS have beheaded people they disagree with.

Goldberg added that she thought some of the language in Trump's travel ban was disrespectful toward women but failed to elaborate specifically on anything the President might have said that particularly offended her.

“If you’re saying to the media shut up — that’s what [the Taliban] do,” she continued. “Maybe they didn’t start out chopping people’s heads off, maybe they started out differently. … Because we’re saying to people, here are our American values, and then we’re saying on the same token stuff that sounds exactly like the stuff we’re fighting.”

She claims Trump is giving “preferential treatment for Christians” and “forgetting the other religions out there.”

“This is what makes us different from everybody else. Our media, nobody tells our media to shut up and just take it. Nobody. That’s not American. That is the Taliban. … My question is, what’s happening?”

(It should be noted that the Taliban or other Islamic terror groups don’t regularly tell the media to “shut up.”)

Last month, Goldberg threatened to leave the United States after having an epic meltdown on live TV over Trump’s immigration approach, accusing Trump of blaming immigrants for the country’s’ problems.

Trump made it clear that he is trying to prevent another illegal immigration crisis – of the same proportions in Europe or worse — from happening in America. Throughout his highly controversial campaign, he promised to secure the U.S.- Mexico border by building a large wall to keep illegal immigrants out of the country.

“For years, the media has largely ignored the stories of Americans and lawful residents victimized by open borders. To all of those hurting out there, I repeat to you these words: ‘We hear you, we see you and you will never, ever be ignored again,’” Trump said at a press conference on January 25.

At least for now, Goldberg has not made good on her promise to leave the U.S.

Caleb Stephen is a widely-published Christian conservative freelance journalist, columnist and social commentator based in Australia. He is also the founder and Editor-In-Chief of The Caleb Report. Caleb, the oldest in a family of 9, has been an active pro-life advocate for a number of years participating in rallies, political campaigns, multimedia promotion and public events. Caleb is thankful for the opportunity to be one of LifeSiteNews’ Australian correspondents. Visit his website www.calebstephen.com and follow him on Twitter @CalebSOfficial