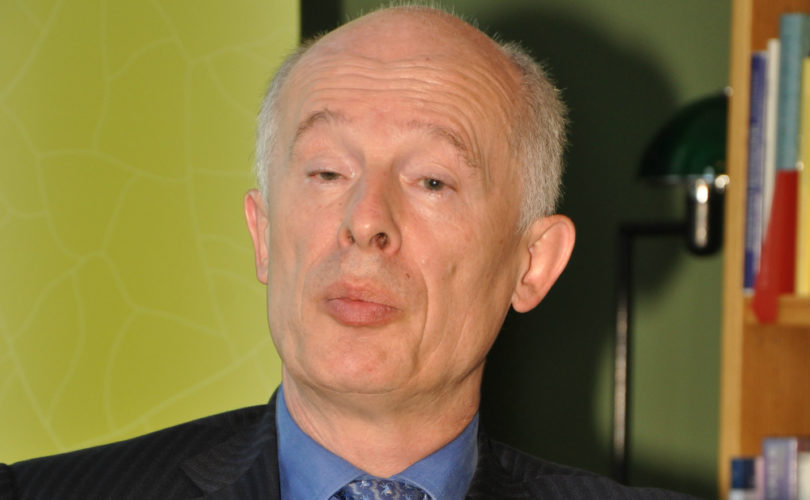 ROME, June 19, 2015 (LifeSiteNews) — On Wednesday the Vatican announced that Pope Francis has appointed controversial German Professor John Schellnhuber as an ordinary member of the Pontifical Academy of Sciences.  Schellnhuber was one of the four presenters of the new encyclical on the environment, Laudato Si’, on Thursday. He is also scheduled to chair a session of a Pontifical Academy for Sciences educational workshop on “Children and Sustainable Development” set for November.

Schellnhuber is the founding Director of the Potsdam Institute for Climate Impact Research (PIK) and Chair of the German Advisory Council on Global Change (WBGU). He is considered one of the world’s leading climate scientists, and one of the strongest advocates of the theory that the earth is undergoing catastrophic global warming. Perhaps most famously, he is the father of the “two-degree” tipping point – namely, the idea that if the earth warmed up by two degrees beyond what temperatures were at the beginning of industrialization, in the words of German Environment Minister Norbert Röttgen, “life on our planet, as we know it today, would no longer be possible.”

According to The New York Times, in 2009 he told a conference that if the earth’s temperature rose by around five degrees Celsius, the human population would be, in the words of the reporter, “devastated.” “In a very cynical way, it’s a triumph for science because at last we have stabilized something –- namely the estimates for the carrying capacity of the planet, namely below 1 billion people,” he is reported to have said at the time.

Although these comments have been widely misinterpreted to indicate that he believes the current capacity of the Earth is one billion people, in context he is referring to the capacity should the temperature rise five degrees Celsius. Referring to the possibility of a drop in the Earth’s carrying capacity, he himself said, according to The New York Times article, “I think we can do much, much better.” His estimate of the current carrying capacity of the earth is unknown.

Schellnhuber is also known for his advocacy of a one-world government.  In order to avoid his catastrophic predictions for unchecked climate change, Schellnhuber proposes the need for indispensable forms of world governance – or in his own words, a “global democratic society” – to be organized within the framework of the United Nations. Schellnhuber says in his 2013 article “Expanding the Democracy Universe” that “global democracy might be organized around three core activities, namely (i) an Earth Constitution; (ii) a Global Council; and (iii) a Planetary Court.” He then described these three activities as follows:

– the Earth Constitution would transcend the UN Charter and identify those first principles guiding humanity in its quest for freedom, dignity, security and sustainability;

– the Global Council would be an assembly of individuals elected directly by all people on Earth, where eligibility should be not constrained by geographical, religious, or cultural quotas; and

– the Planetary Court would be a transnational legal body open to appeals from everybody, especially with respect to violations of the Earth Constitution.

In his 1988 study “Geocybernetics: Controlling a Complex Dynamical System Under Uncertainty,” Schellnhuber said countries should relinquish “a good deal of national sovereignty” in favor of “powerful supra-national institutions.” He wrote:

While the borders of nation states have become almost irrelevant to global economic players (for instance) after the end of the Cold War, human and natural rights are still confined and dominated by thousands of frontiers. This situation can only be overcome by giving up a good deal of national sovereignty and establishing a true regime of global governance. As a prerequisite, the rather symbolic parts and pieces of the UN system must be transformed into powerful supra-national institutions: allons corriger le futur!”

Schellnhuber is also a full member of the Club of Rome, a think-tank that describes itself as “a group of world citizens, sharing a common concern for the future of humanity.”

While the organization currently tackles a variety of issues, it continues to do so following the trajectory laid during its foundational event in 1968 in Rome, at which it started an international campaign to reduce the world's population. It claimed that at the time the world's carrying capacity to hold the ever-growing population was already at its limit. The book-length report, Limits of Growth, which was written for the Club of Rome in 1972, was one of the starting points for the worldwide attempt to reduce the population by aggressive methods of promoting birth control and the killing of pre-born children. As recently as 2009, the Club of Rome has reaffirmed that “the global issues which were the focus of the 1972 Report, ‘Limits to Growth’ are even more severe and urgent today.”

Schellnhuber has been a prominent counselor to the European Union and to German Chancellor Angela Merkel. He is co-chairman of the German Advisory Council on Global Change (WBGU).

In a May 2014 interview with the musician Pierre Baigorry, Schellnhuber claimed that sometimes politicians have to take citizens to task “with coercion” to overcome their own resistance to change. In that same interview he hoped that President Obama would take the necessary steps to do so. “We need a kind of 'Climate Gandhi,'” Schellnhuber said.

He is also well known for his June 19, 2012 interview with Frankfurter Allgemeine Zeitung, where he suggested politicians need to take their lead on climate change from scientists like himself. “The role of climate science remains to slam the problem-facts on the table and to identify options for appropriate solutions,” he said. “The role of politics is then to mobilize the will of the citizens with the aim of implementing decisions that are based on science.”

Schellnhuber has little patience for those who do not accept his scientific theories and conclusions. “I have made a tiring process of learning. […] After a while [of these tiring exchanges about the scientific matter], I realized in each single case that the man – it was never a woman – was driven by a nearly religious zeal,” he told the German internet portal Zeit online on October 11, 2007. “At the end of the debate, we were turning in circles, and I did not get through with the cool scientific rationality. That is similar to people who do not accept Darwin's evolution theory: 'This theory cannot and may not be true!' Such people you cannot at all convince with the help of the insights of biology.”