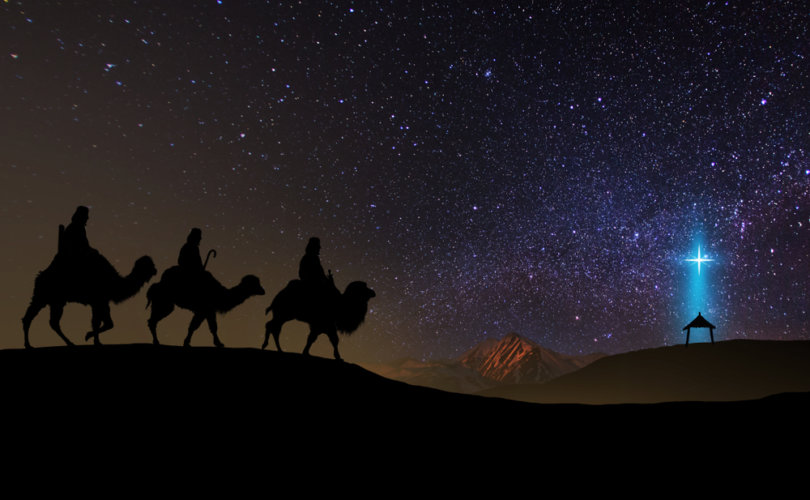 December 24, 2018 (LifeSiteNews) – Nowadays, when I think of the Incarnation — that pivotal moment in all of human history when the Second Person of the Trinity became man and was born in Bethlehem, lying helpless in a crib — I have difficulty sustaining cozy thoughts of Christmas hearth and home the way I once might have.

Everything my eyes see and all that my ears hear during the weeks leading up to Christmas wants to push my whole attention toward capturing a certain warm and fuzzy Christmas spirit, or perhaps toward grasping for the nostalgia of Christmases past.

Yet, during the Christmas season, my thoughts rush to the Cross of Christ, the climax of His mission, and it seems to me, the sustained climax of each of our own lives as Christians.

As a journalist who often writes about our rapidly decaying society and our Church — which increasingly finds itself in turmoil — while also facing my own sins and their consequences in my life, I’m buoyed up not by the carols and wreaths, the fire in the fireplace and the aroma of fresh baked cookies, but by the message of the Cross of Christ.

A preacher/theologian who first caught my attention while speaking at a Vatican colloquium in 2014 — Russell Moore, president of the Southern Baptist Convention’s Ethics & Religious Liberty Commission — has brought this theme into clear focus during talks he has delivered in recent years.

“We cannot be longing for Mayberry,” he once said, speaking of the iconic, folksy small town setting of the popular 1960’s TV program, The Andy Griffith Show, idolized and romanticized by many.

“The world of nominal, cultural Christianity that took the American dream and added Jesus to it in order to say, ‘you can have everything you ever wanted and Heaven too,’ is soon to be gone,” said Moore.

“We don’t have Mayberry anymore, if we ever did. Good. Mayberry leads to hell just as surely as Gomorrah does,” said Moore another time.  “Christianity didn’t come from Mayberry in the first place, but from a Roman Empire hostile to the core to the idea of a crucified and resurrected Messiah.”

“We’ve been on the wrong side of history since Rome, and it was enough to turn the world upside down,” he noted.

With those words, Moore was prescient.  That world is already gone, if it ever actually existed; the apostles of the sexual revolution and their followers now have the upper hand on the airwaves and internet, in our schools, in government, in corporate America and even in the world of sports, claiming moral superiority over Christianity.  From child drag queens, to homosexual “marriage,” to women “shouting” their abortions, this is the new normal, and it is even working its way into the Church.

Said Moore: “We must have a voice that speaks to the conscience, a voice that is splattered with blood.” And, that blood is the blood of the Cross – Jesus’ blood.

“The Kingdom of God is not made up of the moral,” declared Moore. “The Kingdom of God is made up of the crucified and our mission is to speak to a world of people who are often going to come to the end of that mess of pottage that is the sexual revolution, that is pursuit of self, and will ask, ‘what else is there?’ The final word that we must have for those repented souls who throw themselves upon Christ after an abortion, after murder, after family dissolution, should be, there is, therefore, now no condemnation for those who are in Christ.”

If you frantically feel as though you are losing; if you frantically feel as though the culture is leaving you behind, then the problem is that we will become just like the culture that we are critiquing: who’s up, and who’s down, and who’s in charge, and who’s not. God is not surprised by whatever is happening right now in the world around you, in your community, or in the world at large. And maybe God is interested right now not so much in getting America in line with the church, as God is interested in getting the church out of step with America. He says to His disciples, ‘You are different. You have a distinctive calling. You have a distinctive witness. You have a distinctive future. We have a different way.’

And that way is the Way of the Cross.

“We proclaim Christ crucified, a stumbling block to Jews and foolishness to Gentiles,” (1 Corinthians 1:23).

Jesus, the babe in the manger, was born for crucifixion, and so am I.