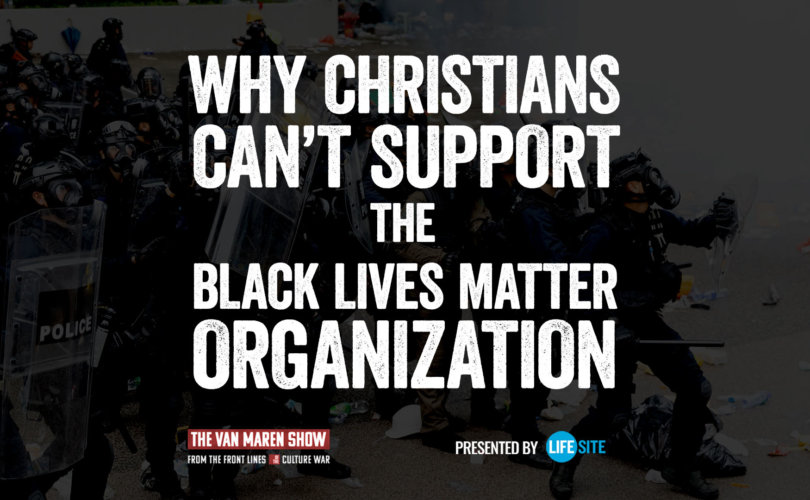 June 10, 2020 (LifeSiteNews) – We are seeing images and videos of protests and riots sweeping across the nation in response to George Floyd’s death. The unjust killing of George Floyd has sparked a movement against police brutality and racial injustice. The Black Lives Matter movement has jumped to the forefront of these protests and is pushing a laundry list of demands from those with “white privilege.”

In today’s episode of The Van Maren Show, African-American pro-life leader Ryan Bomberger speaks out about the harm being done by the official Black Lives Matter organization and the best way to respond to the injustices that are happening in the U.S. and across the world.

Ryan Bomberger was conceived in rape and was adopted into a “multi-racial” family with nine other adopted children and three biological children. Bomberger is an Emmy® Award-winning Creative Professional and the co-founder of the Radiance Foundation. The Radiance Foundation was founded “to creatively affirm that every human life has purpose.”

Bomberger and Van Maren begin by discussing how heartbreaking it is when any life is lost to killing. This tragedy initially led to a united front of people outraged by the killing of George Floyd, but this unification quickly dissolved and became politicized.

At its core, this isn’t about race, but is about the culture.

Bomberger highlights the fact that race really wasn’t seen until the 1700s. Race isn’t mentioned in the Bible. People were delineated as Jews or Gentiles in the Bible, not by race.

Bomberger instead calls on churches to lead the movement. “The church needs to be the one leading on this.”

“We're still having the same conversations. We're still ending up at the same starting point. Why is that? Because the church is not leading a secular world view and a secular movement that has no forgiveness, no reconciliation at its heart is leading it.”

Bomberger points to the fact that the civil rights movement was successful because it was founded in Christianity. Malcom X and Martin Luther King Jr. were both calling for racial reform, but their approach was dramatically different. King’s speeches were laden with Scripture quotes, biblical references, and encouraged a non-violence approach.

Instead of inciting hate and violence, we need healing, Bomberger says.

Since its inception, the Black Lives Movement movement has also been deeply connected to the LGBT movement. It was started by three women in response to the Treyvon Martin case. But from there, it has grown to encompass an entire ideology of “spreading black power” across the nation.

Van Maren points to the fact that although the Black Lives Matter movement is not rooted in Christianity, their actions and words nonetheless seem religious. They genuflect, they recite their “creed” or beliefs. It is almost as though a new religion is being created from this movement.

Bomberger calls it a kind of religion, but one that is not rooted in Christ or the Bible. Instead of leading the movement and helping to truly heal divisions, the churches are being sucked into the Black Lives Matter movement which conflicts with so many of their beliefs.

Bomberger encourages people to turn to scripture and not be fearful to speak out. He highlights Psalm 89:14, which talks about righteousness, justice, unfailing love, and truth in speaking about God’s throne.

He also encourages listeners to understand what is truly going on and work from a Christian foundation to change the culture.