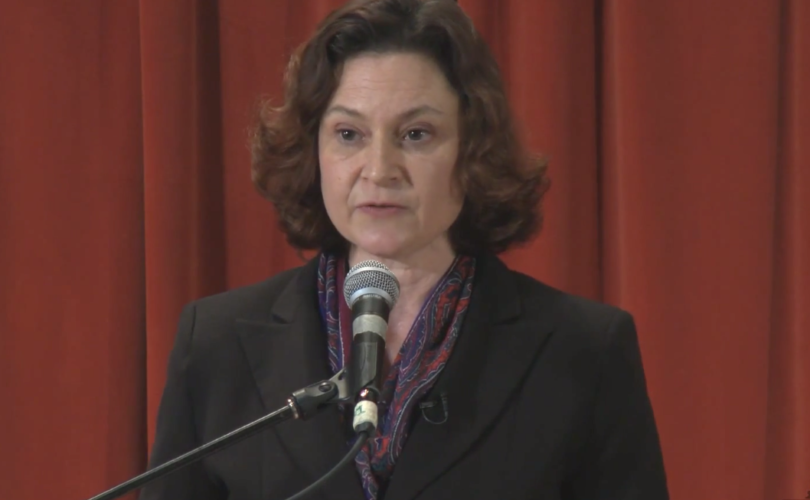 March 6, 2020 (LifeSiteNews) — Libertarians are wrong to believe the government can and should be a neutral arbiter on social issues. The state must take an active role in promoting and protecting the family.

That’s the advice of renowned scholar and author Mary Eberstadt. Eberstadt made the remarks on this week’s Jonathan Van Maren Show while talking about secularization and the loss of faith in the West.

Eberstadt’s lecture, “Social Conservatism and the National Interest,” excoriated libertarianism as a simplistic ideology rooted in indifference to cultural degradation.

On this week’s podcast, Eberstadt told Van Maren that the pro-family policies being pursued by Hungarian Prime Minister Viktor Orbán are worthy of emulation.

“After 60 plus years, after the sexual revolution and all of the destruction of the family, it’s time to try things like this and to watch these experiments closely.” Hungary has encouraged childbirth among its citizens and “the abortion rate dropped by a third,” Eberstadt stated. “That is something every pro-lifer in the world needs to know…that is a clear example of how family building policies can actually be found.”

Eberstadt has come to be known in recent years for holding contrarian views on how the West rejected religion and embraced secularism. Most scholars believe that after World War II, nations slowly turned away from God and the breakdown of the family soon followed. Eberstadt believes the opposite.

“Religiosity depends on the vibrancy of the family,” she told Van Maren. “It's not the case that people lose religion and then their families fall apart. It's the lack of vibrant families that makes the transmission of religious belief harder than it used to be.”

Eberstadt then claimed that libertarians who want lower taxes and less government intervention will only see that happen if there is “some kind of familial restoration” that eventually turns into a “religious revival.” Once that occurs, the size of government will be rolled back because “entitlements exist to do what robust families used to do, which is to take care of people within families that are no longer functioning well.”