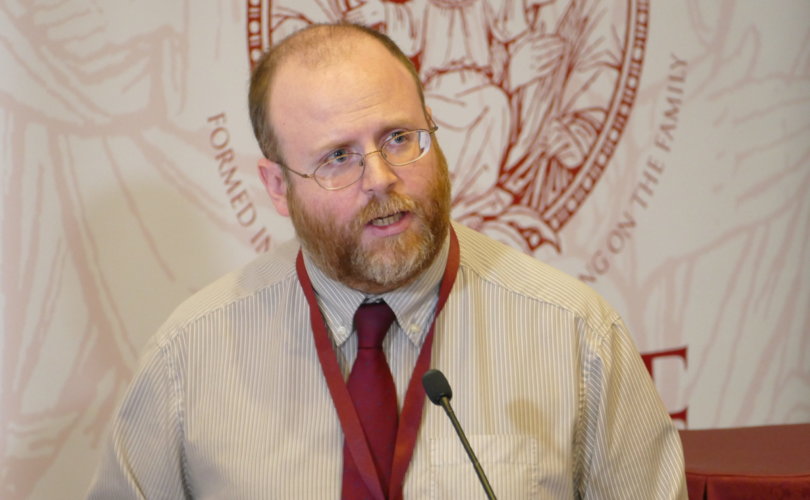 ROME, May 17, 2019 (LifeSiteNews) – A British Church historian defended St. Augustine’s firm distinction between the City of God, which is the Church headed by Christ, and the fallen City of Man, which is the world, arguing that the idea of a “neutral city” for which Christians and pagans can “toil together” is a “mirage – worse than that – a lie designed to win us away from our true loyalty to the city which is above.”

“This is a fundamental insight of the City of God. Christ’s Church is first and foremost the Church Triumphant in Heaven with which we are associated through baptism,” said Dr. Alan Fimister, an Oxford University graduate now teaching at an American seminary, during his talk at the Rome Life Forum conference in Rome. His talk directly addressed the theological theme of the conference “City of God vs City of Man; Global One World Order vs Christendom” in his paper “No Abiding City – The Challenge of St. Augustine” (read full talk here).

Continued Fimister: “The faithful of the Church Militant here below have no abiding City. Happiness cannot be found in this life. Those who seek it here below share in the rebellion of Lucifer who imagined he could make himself like the Most High (Isaiah 14:14). There is no common project to which the Catholic Church might contribute. No neutral space in which the brethren of Christ and the slaves of the evil one might labour in common. No end sought by humanity as a whole in this fallen state. There is indeed a natural unity to man but all who sin put themselves at enmity with this unity and all sin. We are reincorporated into it in so far as we are redeemed and the minority who accept and seek to live by the grace of redemption may form the true human city but insofar as they do they also put themselves at odds with the rest, with the vast bulk of mankind.”

Fimister said that there are Catholics today who do not understand the nature of the relationship of the Church and the world.

“About ten years ago a public debate was held in England between some Catholics and some opponents of the Church,” he informed his audience.

“The Catholics were generally not considered to have had the best of it (to put it mildly). The event triggered some trauma. An organisation was even founded to ensure that in any similar contest the Catholics would hold their own. What no one seemed to notice was the erroneous nature of the proposition the Catholic speakers were defending: that The Catholic Church is a force for good in the world.”

Fimister presented St. Augustine’s “City of God”, written after 410 AD, as a rebuke to pagans who blamed Christianity for the sacking of Rome. In this work, Augustine defined the Christian vision “of history and society in the Latin West for a thousand years.” Offered the same proposition that got the English Catholics into trouble, St. Augustine attacked the idea that a world without Christ as its head is worth serving.

The historian drew upon the Gospel of St. John, St. Augustine, St. Paul, and Blessed Cardinal John Henry Newman to underscore that the only good and just society is that “whose founder and ruler is Christ.” St. Augustine and Newman agreed that secular states are essentially “brigandages”, founded on invasion and conquest, and therefore theft and violence. Augustine believed that “there is no value to the service of any temporal state unless or until it was incorporated into the heavenly one,” Fimister explained. The best thing one can do for such as state is incorporate it into the City of God.

This, essentially, is what Christendom was or was meant to be: temporal states in the service of the City of God, which is the Church Triumphant in Heaven. Fimister revealed that medieval kings were considered deposed when they were excommunicated because “outside the Church they were mere brigands once again.” However, just as children owe godless parents obedience and love, citizens of a godless state owe it obedience “so long as our temporal homeland does not require of us any violation of natural or divine law,” said the historian, drawing on St. Paul.

Fimister concluded with Cardinal Newman’s searing denunciation of Catholics who are too cozy with the world condemned by the Gospel of St. John, which included Christ’s hard teaching that Christians will be despised by the secular world:  “‘If ye had been of the world,' says Christ, 'the world would love its own; but because ye are not of the world, but I have chosen you out of the world, therefore the world hateth you.'”