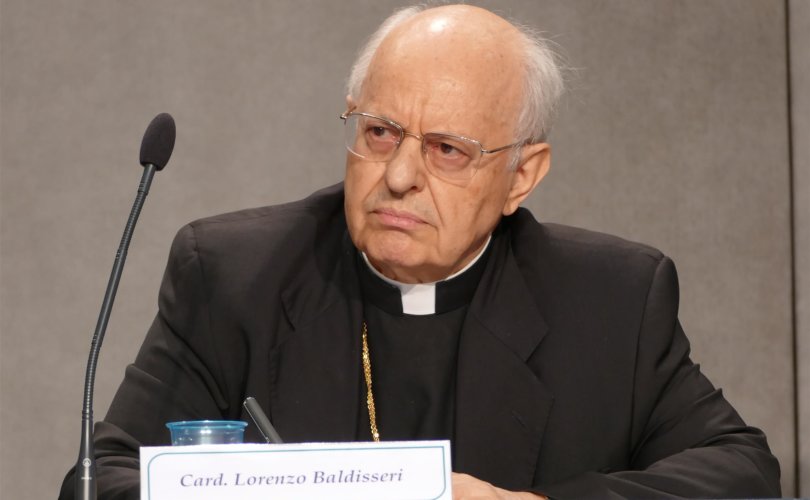 ROME, June 20, 2018 (LifeSiteNews) — Did Cardinal Lorenzo Baldisseri, the lead organizer of the Vatican’s upcoming Youth Synod, knowingly make a false statement or was he simply mistaken?

At a June 19 press conference to present the working document for the October 3-28 Youth Synod, the Secretary General of the Synod of Bishops was asked why the phrase “LGBT youth” was used in the Vatican document.

The Holy See has never used the acronym “LGBT” in a document before, the questioner pointed out, because the Church “does not classify people according to their sexual orientation.”

Observers also note that doing so would effectively legitimize an acronym invented by the homosexual and transgender movements.

Cardinal Baldisseri replied by saying the acronym LGBT is taken from the pre-synodal document compiled by young people at their meeting with the Pope and Synod organizers, March 19-24, 2018. Baldisseri said the synod organizers were “very diligent in taking into account the work done by the bishops’ conferences, but especially the results of this meeting with youth, of which they were the protagonists.”

In the working document, the reference to “LGBT youth” is tucked between comments on migrants and interreligious dialogue in a section called “A community open and welcoming to all.” The relevant passage reads (we provide the immediately preceding paragraph for context):

196. The pre-Synodal meeting saw the participation not only of young Catholics, but also of young people of other Christian denominations, of other religions and even of non-believers. It was a sign that the young people welcomed with gratitude, because it showed the face of a hospitable and inclusive Church capable of recognizing the richness and contribution that can come from each person for the good of all. Knowing that authentic faith cannot generate an attitude of presumption towards others, the Lord’s disciples are called to value all the seeds of good present in every person and in every situation. The humility of faith helps the community of believers to let itself be instructed also by people of different positions or cultures, in the logic of a mutual benefit in which it gives and receives.

197.  For example, in the IS [International Seminar on the condition of youth in the world (September 11-15, 2017)] some experts pointed out that the migration phenomenon can become an opportunity for intercultural dialogue and for the renewal of Christian communities at risk of regression. Some LGBT youth, through various contributions that came to the Secretariat of the Synod, wish to “benefit from a greater closeness” and experience greater care on the part of the Church, while some CEs [Episcopal Conferences] ask what to propose “to young people who instead of forming a heterosexual couple decide to form a homosexual couple and, above all, wish to be close to the Church.”

This correspondent looked back at the final document of the pre-synodal meeting with youth in March, and the acronym LGBT does not appear. In the newly released working document, i.e the Instrumentum laboris, it is not put in quotes.

The incongruence between Cardinal Baldisseri’s words and reality comes amid concerns that the upcoming Youth Synod will be used to push forward an LGBT agenda within the Catholic Church.

These concerns are heightened by the fact that a faction within the 2014 Extraordinary Synod on the Family sought to introduce a shift in the Church’s teaching on homosexuality through their interim report, releasing the document to the media before the Synod Fathers had seen or reviewed it. At the time, veteran Vatican journalist Sandro Magister said this introduction “would not have been possible without a series of skillfully calculated steps on the part of those who had and have control of the procedures.”

At yesterday’s press conference, LifeSite followed up on the working document’s use of the LGBT acronym, asking Cardinal Baldisseri how Catholics can trust the upcoming Synod given that the Vatican has invited Fr. James Martin to speak on ‘LGBT issues’ at the upcoming World Meeting of Families in Ireland this August.

Fr. Martin, an American Jesuit priest, has drawn controversy for his views on relaxing the Church’s teaching on homosexuality.

“For the rest,” he said, “we are open. We are pleased that the Synod is not closed, a ghetto, an internal affair of the Church. And there are various areas in the Church. There is freedom, there is freedom to express oneself on the right, left, center, north and south. This is all possible. That is why we welcome people who have different opinions.”

The English translation of the working document is expected in the coming days.

Note: The Catechism of the Catholic Church states regarding chastity and homosexuality

2357 Homosexuality refers to relations between men or between women who experience an exclusive or predominant sexual attraction toward persons of the same sex. It has taken a great variety of forms through the centuries and in different cultures. Its psychological genesis remains largely unexplained. Basing itself on Sacred Scripture, which presents homosexual acts as acts of grave depravity,141 tradition has always declared that “homosexual acts are intrinsically disordered.”142 They are contrary to the natural law. They close the sexual act to the gift of life. They do not proceed from a genuine affective and sexual complementarity. Under no circumstances can they be approved.