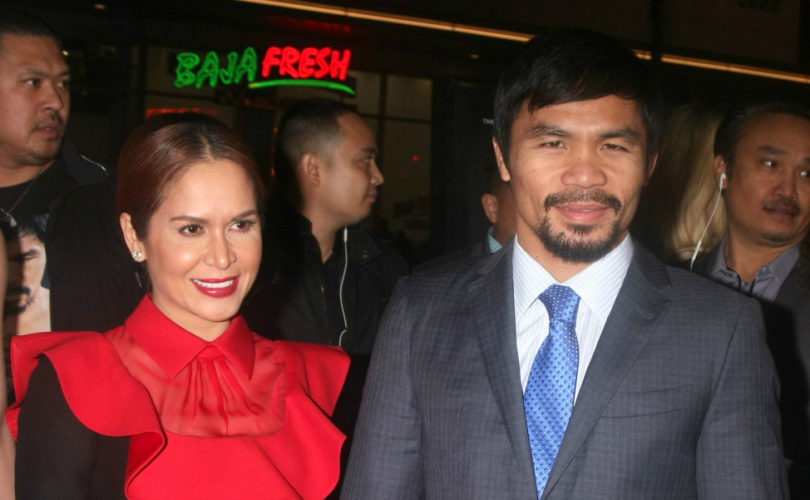 Manny Pacquiao’s phrasing was unfortunate. But he 100% deserves our support. (Pictured: Manny and his wife Jinkee Jamora)Helga Esteb / Shutterstock

Feb. 19, 2016 (LifeSiteNews) – If you’re like us, you cringed when you read the headlines: boxing superstar and born-again Christian Manny Pacquiao had said during a TV interview that homosexuals were “worse than animals.”

LifeSiteNews is, of course, strongly opposed to same-sex “marriage,” and believes 100% in the age-old Christian teaching that sexuality can only be morally expressed in a life-long marriage between a man and woman. Those same teachings make clear that, like any sexual activity outside of marriage, homosexual behavior is a serious sin.

But in arguing in favor of this viewpoint, we would never simply dismiss homosexuals as “worse than animals.” Homosexuals are sons and daughters of God, and deserve to be treated as such. Any criticisms of their choices or lifestyle must be issued out of loving concern for their temporal and spiritual welfare.

It quickly became clear, however, that behind the sensational headlines, was something altogether different.

Contrary to the headlines and the claims of LGBT activists, Pacquiao did not issue a blanket condemnation of homosexuals as “worse than animals.” Instead, he was making a far more limited point. And that point is basically sound: i.e. to anyone with eyes to see, there is obviously a design within nature, and that design clearly points to the biological complementarity of men and women. Though one can find extremely rare aberrations in nature, the animal kingdom almost universally acts in conformity with this design. It is only man that blinds himself to that design, and deliberately acts against it – to his own destruction.

Now, this may not be the most sophisticated argument against same-sex marriage or homosexual behavior. And there is no question that some of Pacquiao’s phrasing was unfortunate and left too much open to misinterpretation. But there is no evidence to support the LGBT or media narrative that Pacquiao was irrationally lashing out at homosexuals out of hate or “homophobia.”

This became clear in Pacquiao’s subsequent apology, in which he expressed regret for any hurt he may have caused homosexuals in his initial remarks, and added: “I'm not condemning LGBT. I love you all with the love of the Lord. God Bless you all and I'm praying for you.”

This response echoes remarks he made after a similar controversy in 2012, when he had expressed disagreement with President Obama’s support for same-sex “marriage.” At the time he responded to the inevitable media backlash with similar grace, saying: “I am against gay marriage, but I’m not condemning gays. I have family – a cousin – who’s gay, and friends too. I’m just against gay marriage… To the gay community, I apologize. My favorite verse is ‘Love one another as you love yourself. Love your neighbor.’ So I love everybody!”

These are not the words of a homophobic bigot. Unfortunately, however, we live in a society in which the mere expression of disagreement is quickly labeled as “hatred,” and where well-funded LGBT activist organizations are on the prowl to expose and punish the slightest deviation from the prescribed rules of political correctness on homosexuality.

LGBT activist organizations have attempted to dismiss these health risks as being the result of the “intolerance” suffered by the homosexual community in society. But this argument obviously doesn’t hold water, as many of the health problems endemic in the LGBT community are directly traceable, at a physical level, to homosexual sexual practices. Furthermore, these same health problems also exist within the homosexual community in countries that have the highest rates of acceptance of homosexuality.

Pacquiao himself knows too well the suffering and harm that comes from violating the Bible’s strictures on sexuality. He has been open that in the early days of his fame he was repeatedly unfaithful to his wife, and in the process made himself miserable and nearly destroyed his marriage. Since then he has recommitted himself to living and promoting his Christian faith, including its hard and unpopular teachings on marriage and sexuality.

Yes, Pacquiao could have expressed himself better in that initial TV interview. He himself has admitted so and apologized. But in no way does he deserve the hatred and condemnation that is being heaped upon him by the media and LGBT activists. On the contrary, he deserves praise for speaking the truth on homosexuality and marriage, out of love for homosexuals, in a hostile culture, no matter the personal risk.

And that is why LifeSiteNews supports Manny Paquiao.