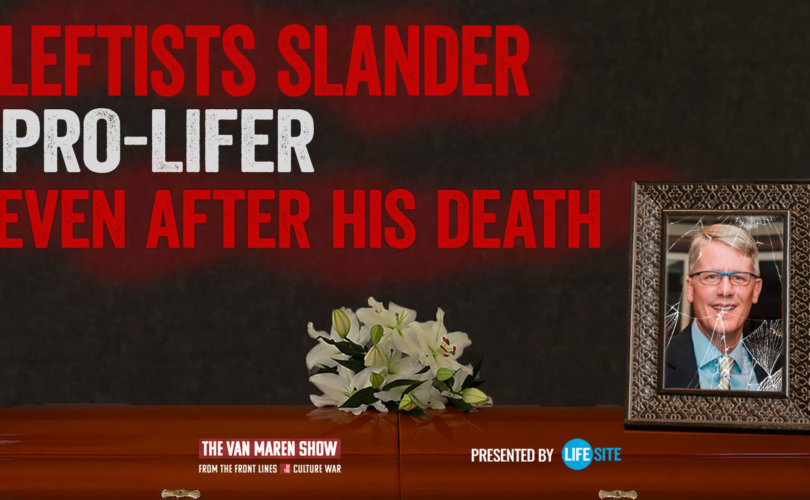 August 4, 2020 (LifeSiteNews) — Mike Adams is described by friends as a “pro-life and free speech warrior,” “witty,” and “satirical,” yet in recent obituaries, he is being defamed by the mainstream media for his conservative views and satirical posts.

Dr. Frank Turek, a close personal friend of Mike’s, joins Jonathon Van Maren on today’s episode of The Van Maren Show to set the record straight and pay tribute to Mike’s contributions to the conservative movement.

Mike Adams was a criminology professor at the University of North Carolina, a columnist, and a pro-life and free speech activist. After converting to Christianity, he faced discrimination at the University of North Carolina despite being loved by his students. After a seven-year lawsuit, the courts ruled that UNC had unfairly discriminated against Adams.

During that time and continuing, Adams faced relentless attacks from the university, from other students, and from the media for his conservative beliefs. Dr. Turek said that health issues may have impacted Adams' ability to think clearly, and may have resulted in his suicide in June of this year.

The mainstream media haven’t heard of the adage “never speak ill of the dead,” as that is all they seem to be doing in Adams’s obituaries. It wasn’t enough to attack the man when he was alive; the beratement must continue now that he has passed.

Dr. Turek provides truth and light in honoring Adams after his death. Turek directs people to listen to his full podcast eulogy to hear more of Adams’s achievements and contributions to society

Turek highlights the children Mike saved through his pro-life work, his fearless defense of freedom, and the countless lives he touched as a teacher.

In addition to teaching at the University of North Carolina, Adams also taught at the Cross Examined Summit, a Christian ministry run by Turek, training more than 15,000 graduates throughout his time here.

“He was afraid of virtually no one when it came to speaking for free speech and speaking for the pro-life movement,” Turek shares.

Turek also points to Adams’s victory over UNC as setting precedent to protect professors from discrimination for their political views.

Turek also discusses Adams’s great sense of humor and joy for life. Adams loved to point out the obvious using satire. He was even a contributor to the Babylon Bee for a while.

Once, at a rally protesting Mike Adams, Adams himself joined the rally and began shouting, “I hate Mike Adams.” It took the people in the crowd a while to realize that the man they were protesting had actually joined their ranks.

Adams even sold “I hate Mike Adams” bumper stickers. A friend recommended he make the most of the attacks against him and use the money to fund his website, so Mike did!

According to Turek, a friend called it the “ultimate triumph of capitalism over socialism.”

“Have the socialists pay you for your product that says, ‘I hate Mike Adams.’ And then you could take that money and fund your website. It’s the it's the ultimate triumph of capitalism over socialism.”

Van Maren and Turek also discuss Adams’s powerful pro-life advocacy. Adams was a proponent of using strong images to illustrate the point. It is very difficult to see the hands and feet of an aborted baby and not recognize him as a human being.

Turek and Adams’s family are looking into the cause of Mike Adams’s death, as he had not been himself in the few weeks leading to his death. Either way, Adams was a staunch defender of life who suffered greatly at the hands of the left.