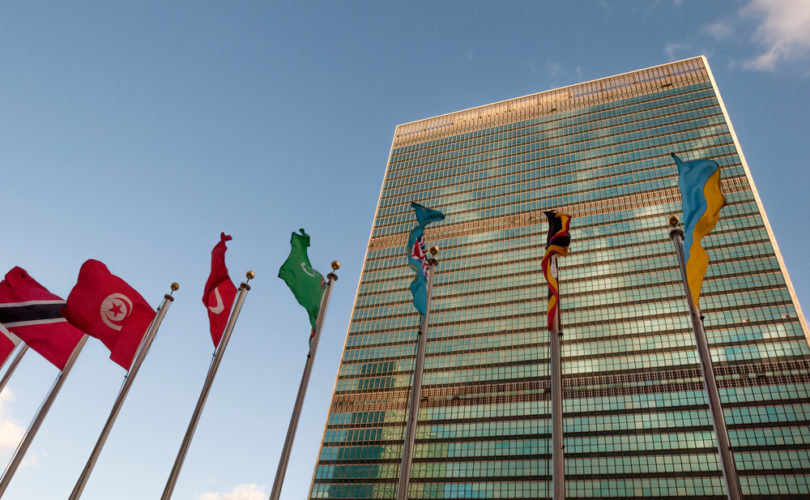 February 13, 2015 (C-Fam.org) — The final event in remembrance of the Holocaust at UN headquarters last month was a briefing on “The Holocaust, Homosexuals and Lesbian, Gay, Bisexual and Transgender Rights Today.”

After a brief reflection on homosexuals under Nazism featuring a historian and an openly gay son of Holocaust survivors, the panel turned to scrutinizing the lack of progress on LGBT issues within the United Nations.

A European Union delegate working with governments at UN headquarters appeared ready to throw in the towel on making any progress on LGBT rights.

“In New York we only have a statement on these matters,” said Rafael Bustamante. The European Union is one of few delegations committed to raising LGBT issues at the UN.

The family is “not seen with the same lens” by all EU countries, so the delegation at the UN is unable to promote gay marriage. But it wants recognition of “different forms of family,” Bustamante added.

The forlorn diplomat also described how their inability to put LGBT issues on the UN agenda has limited them to holding public events at UN headquarters.

Other panelists were more sanguine.

“We are working with governments behind the scenes,” said Charles Radcliffe, a high-ranking official in the UN human rights office, who is spearheading the LGBT initiative within the UN bureaucracy. “This is one situation where we can achieve more than by shouting from the rooftop,” he explained.

When prodded for specifics, he assured that the UN leadership has “many opportunities to engage at a very senior level.” His office is “putting out a lot of talking points” and “the issues are being raised again and again.” The UN bureaucracy had been “instrumental” in assisting governments on the ground to develop laws and policies, as well as train judges, police, and civil society.

Radcliffe said the UN campaign for LGBT rights, called “Free and Equal,” has reached 1 billion people. “We need to change people’s hearts and minds,” he said. While Radcliffe made an optimistic forecast, he warned about the proliferation of laws that curtail LGBT activism and are “harnessing anti-western homophobic sentiment.”

Marianne Mollman of the International Gay and Lesbian Human Rights Commission, which trains LGBT groups in public relations, laid out her organization’s plan.

Decriminalizing sodomy and recognizing sex changes is essential but “will not achieve everything that is needed,” she said. The only way for all aspects of LGBT life to come to the fore, she explained, is promoting awareness that sexual orientation and gender identity is “everybody’s issue because it's part of who we are.”

Last month marked the 70th anniversary of the liberation of Auschwitz.

Rick Landman, a child of Holocaust survivors, described his campaign to have Holocaust Memorial Park in New York City include homosexuals, and other victims of the Nazi regime.