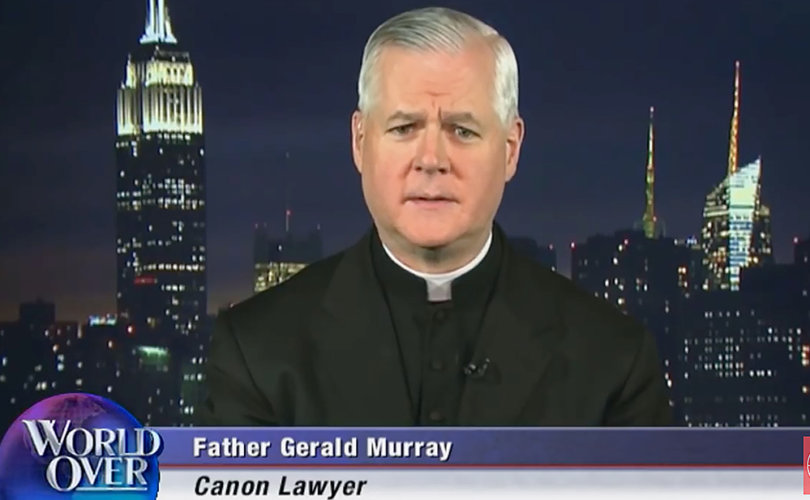 Following the program, Spadaro had retweeted a message demanding an interdict on Arroyo, the host of “The World Over.”

Spadaro clearly agreed with the tweet’s severe criticism of the show and call for the interdict, a severe formal Church penalty.

Spadaro remarked in his speech that “The pope is light years away from the theories of a clash of civilizations” and “seeks to solve the narrative of a toxic final clash of religions that nourishes the fear of chaos.”

Father Murray opined that Spadaro’s attitude was “puzzling” and reduced human life to a game of “King of the Hill.” He said the point of human life is knowing and fulfilling God’s will and bringing society into accordance with it. “That involves identifying things that are evil, reprobating them, (identifying) what is just and good and writing good laws to promote them.” He pointed out that the early Christians had not thought the Romans were just in killing them, and also that the fight against communism truly is a “fight of good and evil.”

“Pretending there are no differences is very naive,” he said. “I think Father Spadaro’s words have to be reconsidered because they really don’t express the truth.” (video segment starts at 6:21 below)

Robert Royal added that Spadaro’s statement was “puzzling” and “confusing.” He pointed out that Francis does indeed take a strong line in some moral questions.

“To abolish this (argument for right against wrong) in diplomacy, for the sake of the conversation, sure, you could do such a thing, but in reality the Pope certainly has views about the environment, about the international economic situation that he’s stated very forcefully and made judgments about, and I think he ought to if that’s what he believes,” Royal said.

He sees a place for tact in diplomatic relations, but not for refusing to state what is right and what is wrong. “This seems to me to abandon what the primary role of the Church in the world is.”

Prompted by Arroyo, Royal agreed that this problem is echoed in Amoris Laetitia. “There does seem to be in that idea of accompaniment and discernment a suspension of what we really believe, and in the meantime we wander about in a conversation,” he said.

Arroyo then presented remarks made by Francis in an address to fellow Jesuits in Chile and subsequently published by Spadaro in his magazine La Civilitá Cattolica. Pope Francis had stated that what the Church most needs today is “discernment.”

“Discernment doesn’t mean that what we formally said was wrong can now be right because people look at things differently,” he continued. “That’s not what discernment means.”

“The DNA of Communism is there in China”

Arroyo said that everything Spadaro spoke about at Georgetown pointed to the Vatican’s dealings with China and played a second clip from his speech.

“Francis is walking the same path of John Paul II and Benedict XVI, trying to find a way to dialogue effectively with the Chinese authorities,” said Spadaro. “The Church doesn’t want to give away the authority to ordain bishops. The history of the Church is the history of finding agreements with the political authorities about the appointment of bishops.”

Royal pointed out that there was a difference between the Catholic kings of the past and atheist communists when it comes to choosing bishops.

“Whether it’s the King of France or the Holy Roman Emperor, they are part of the Christian household,” he said. “When we’re dealing with Communist China. … The DNA of communism is there in China. We’ve got the work camps. We’ve got the oppression of religion. We’ve got forced abortions. We’ve got population control. There are no human rights being respected. We have environmental disasters which in spite of some persons in the Vatican cannot be ignored. … ”

“We’re dealing with a regime which is not simply any regime with whom you negotiate how bishops are going to be appointed,” he continued. “This is a regime that in its very constitution, in its ideology, and in the way it acts, seeks to eliminate … the existence of an independent Church.”

“I don’t know how people can’t quite see that,” Arroyo replied. “I can understand (the Vatican) wanting to make a deal, but does that deal save the faithful, martyred Church in China … ?”

Murray expressed his support for Cardinal Zen and those working with him to convince the Vatican that it is “disastrous” to allow the Communist Party of China to name Catholic bishops.

“The Catholic Church is not ever the department of a government,” he stated. “When it becomes that, it ceases to be Catholic. That’s what happened in England with Henry VIII.”

He contrasted the Vatican’s resistance to Cardinal Zen to Francis’ avowed dislike for top-down Church government, his love of dialogue, and his wish for local bishops to be empowered to speak freely.

“I don’t see a lot of dialogue going on here between the (Vatican) Secretary of State and the Chinese bishops about what they want,” Murray said. “This seems to be a Vatican deal, and I think Cardinal Zen is the one we should listen to.”

Royal mentioned that there seemed to be a certain “indulgence” toward “rogue regimes” but a harshness toward the United States, Western Europe, Poland, and Hungary.

“There’s a bias there that I think is quite evident to people who follow the Holy See’s current foreign policy,” he said. “It’s one thing to have a desire to reach out … but we must be realistic. We must be tellers of the truth … China is not a place where solidarity is being practiced.”

Recalling that Spadaro had called the political collaboration between Catholic and Protestant Americans “an ecumenism of hate, Arroyo played Spadaro’s remarks on Pope Francis and the culture war. The papal adviser had suggested that Catholic priests are currently suffering from a fortress mentality or “Masada complex.”

“Bergoglio wants to liberate pastors from the feeling of being at war, kind of a culture war, surrounded and dismayed under a sort of Masada complex by which the Church feels enclosed by a society it must fight against,” Spadaro said.

Murray said that pro-life, pro-family people would say Father Spadaro doesn’t know what he is talking about.

“The culture war is not a right wing invention to raise funds, you know. The culture war is the assault on Christian morality and natural law that we’ve been experiencing in this country and throughout the western world, and its manifestations are clear: contraception, abortion, euthanasia, and now we have these fantastic schemes … to create human life in test tubes and manipulate (it) … It’s turning man into a commodity that’s disposed of by the powerful according to what they want.”

“Christianity is the light of truth that believes in the innate dignity of every human life,” said Murray, “and when people violate that, we are going to fight back.”

“It’s very offensive to say that when Catholics and Protestants cooperate to try and promote the moral law, that this is based on hatred. It’s the exact opposite. It’s based on love. It’s based on love for everyone, especially our most needy neighbors, the unborn and the weak.”

Hope amid the Bishop Barros scandal

The Papal Posse also discussed the scandal swirling around Bishop Barros and whether or not Pope Francis knew of the accusations against the bishop before Francis appointed him to his current diocese.

Last week, Arroyo had interviewed a Chilean survivor of alleged clerical sexual abuse. Juan Carlos Cruz told the host that Cardinal O’Malley of Boston that assured him that Pope Francis had received his letter concerning Bishop Barros role in his victimization. Pope Francis, however, has said that he did not receive any evidence indicating Bishop Barros knew of any abuse.

Royal praised Pope Francis for meeting with clerical sex abuse victims every Friday, but thinks he must do more.

“It’s wonderful that he takes that personal approach, and that’s the wonderful side of this pope. But something has got to happen on an institutional level so that these sorts of mishaps don’t take place. They discredit everything else the Church has been rightly doing to deal with the problem.”

Murray praised Archbishop Scicluna of Malta, saying he is the right man to investigate the Barros case.

“I’m actually confident (in the outcome) because Archbishop Scicluna … investigated Father Maciel, the founder of the Legionaries of Christ, and he personally conducted interviews with Maciel’s victims, and it was that evidence that brought Maciel down. So he has a good track record in promoting justice in this matter.”

However, Murray too felt that something must change in the Vatican’s handling of abuse cases.

The men burst into laughter.

Murray reflected on the closed nature of the original Boston College Amoris Laetitia conference and worries that the “New Momentum” series will be just like it.

“This would be a disaster again because we have to have open and free exchange of ideas, not a prepackaged set of ideas coming forward.”

What the priest wants to see is an attempt to harmonize Amoris Laetitia, and the bishops’ implementations of the document, with the rest of Church doctrine.

“For me (the “New Momentum” series) looks like a cheerleading, propaganda-type session in which everybody’s going to say, ‘Look, all those conservatives and traditionalists, they no longer count; John Paul II, (his teaching) was true back then, it is no longer true …,'” Murray said. “This is a disaster. The Catholic Church is not a political party that changes its platform every four years at a convention. The Catholic Church is the herald of God’s truth.”

Father Spadaro had refused an invitation to be interviewed by EWTN host Raymond Arroyo and so EWTN sent a cameraman to record the papal adviser’s speech.