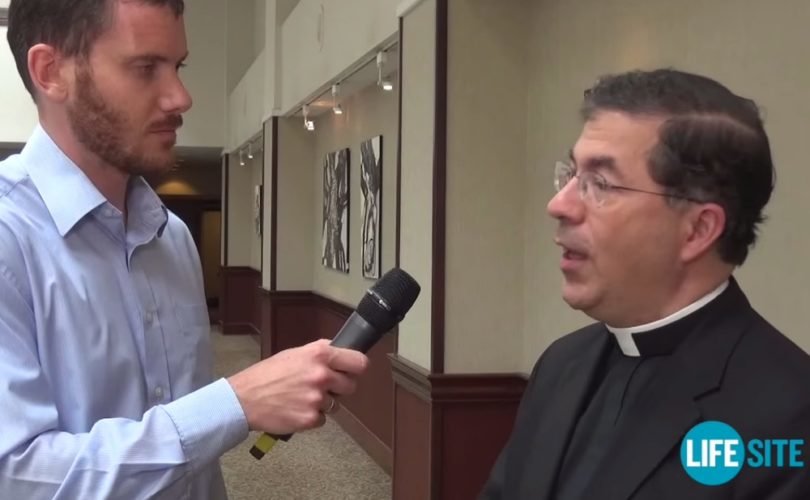 WASHINGTON, D.C., July 23, 2015 (LifeSiteNews) – A key player in last week’s startling video exposé of Planned Parenthood says that it took 30 months of strategic planning from numerous pro-life organizations to give the story the hard-hitting power with which it has walloped the abortion industry over its practice of harvesting the body parts of aborted babies.

“We are seeing the fruit of a lot of careful thought, a lot of disciplined activities, and a lot of undercover work,” Rev. Frank Pavone, executive director of Priests for Life, told LifeSiteNews in an interview in Washington.

Since breaking Tuesday of last week, the story has trended first place in social media platforms such as Facebook and has been given top priority on mega news aggregation websites such as Drudge Report. The first of now two undercover videos has been viewed over 2.5 million times on YouTube.

Pavone said that this is not the first time Planned Parenthood has faced the heat for what many considered to be a barbaric practice of harvesting human organs for profit. Similar investigations in the late 1990s into the practices of Planned Parenthood found that aborted babies were being dissected alive, harvested, and sold in pieces for research.

“Now this is fresh evidence. Now this is evidence going to the highest levels of Planned Parenthood. We know that people at the national level of Planned Parenthood are aware of and are admitting that these baby body parts are being harvested, that transactions are taking place, that money is changing hands. And so, this is catching the attention of the American public because it brings the abortion issue down from the abstract level to the concrete,” he said.

Pavone believes the story has received so much traction in social media outlets like Facebook because it gives people a platform to express outrage over the injustice of abortion in response to mainstream media’s unwritten rule of silence and apathy on abortion.

“Social media has become the engine for those who feel so frustrated that things we have known for years that the abortion industry is doing, and yet we can’t seem to get the word out, now these people are taking this and running with it. And I think you’re seeing years and even decades of frustration being channeled in productive ways to say, ‘We’ve got to shout this from the rooftops.’ And social media is the perfect rooftop,” he said.

When asked what the undercover videos released so far reveal about the abortion industry and the people who work in it, Pavone responded:

When an abortionist dehumanizes the baby that he or she is about to kill, the abortionist also dehumanizes himself. And this is what we are seeing in these people. We see it in Deborah Nucatola sipping the wine and eating the salad and talking about the body parts. We see it in the newest video [about] Dr. Mary Gatter. We saw it in [jailed abortionist] Gosnell.

What’s wrong with [these people]? There are two things wrong. Number one, these people are dehumanized. They are deeply damaged by the abortions they perform. Because when you perform your first abortion, a voice of protest rises up within you saying, ‘No. Stop. You can’t do this.’ But then if you ignore that voice, and go ahead and do that abortion, then the next time you have to explain to yourself, and to everybody else, why you ignored that voice. And so, the voice of protest gets buried under layer, and layer, and layer of excuses and rationalizations. And in doing that, you are becoming disconnected from your own conscience.

How can these people talk about this with apparent peace on their face? It’s because they are disconnected from themselves, from their own conscience.

Pavone said that new undercover videos to be released in the coming days will continue to shed light on the gruesome practices happening at Planned Parenthood abortion centers across the nation.

Already a Congressional investigation is underway, but so far, Planned Parenthood is refusing to cooperate with the demands of the Committee investigating.