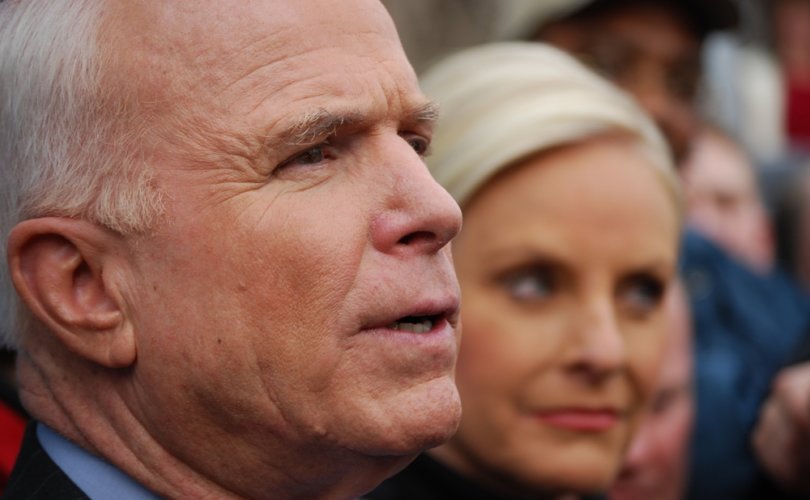 WASHINGTON, DC, July 28, 2017 (LifeSiteNews) – In a late night session which lasted until past 2:00AM this morning, the Republican-dominated United States Senate voted against repealing Obamacare.

In a surprise move, Senator John McCain of Arizona joined two other Republicans – Lisa Murkowski of Alaska and Susan Collins of Maine – casting the vote which brought repeal efforts to a screeching halt.

The so-called “skinny repeal” of Obamacare would not have fully repealed the law, but it would have effectively ended Obamacare’s most unpopular components, including the burdensome individual and employer mandates to purchase health insurance, as well as the medical device tax.

In the end, the final tally was 51-49 against the “skinny repeal” bill.  Had Senator McCain voted for the bill, the vote would have been 50-50, and Vice President Mike Pence who was present in the chamber would have cast the final vote breaking the tie, 51-50.

While Murkowski’s and Collins’ ‘no’ vote came as no surprise, McCain’s was a middle of the night shocker, eliciting an eruption of applause and cheers by Democrat colleagues, quickly squelched by Senate Minority Leader Charles Schumer, presumably in the name of propriety.

The impact of voting ‘no’

Republicans in Congress, including Senator McCain, have been promising for seven years to do everything within their power to repeal Obamacare.  For seven years they have also voted time after time to repeal the odious law, knowing that the bill would be dead on arrival on President Obama’s White House desk.

Michael Needham, CEO of Heritage Action for America, said, “Long before tonight, the Senate demonstrated a complete and utter inability to govern. Repealing and, ultimately, replacing Obamacare will require moderate Republicans to come to the table and follow through on their repeated campaign promises.”

He continued, “At this very moment, Americans are stuck with a failing health care law. Networks continue to narrow. Premiums continue to rise. And choice continues to decline. Obamacare is becoming a zombie law, and throwing more taxpayer money at Zombiecare is unacceptable.”

Needham concluded, “The only way to force Senators back to the table is to block efforts to prop up Obamacare. After seven years of promises, Republicans cannot simply retreat to embracing the status quo.”

So why did Senator McCain do it?

To explain himself, Senator McCain issued a formal statement to the press shortly after he cast the deciding vote.  “While the amendment would have repealed some of Obamacare’s most burdensome regulations, it offered no replacement to actually reform our health care system.”

The Senator also said that even though House Speaker Ryan had promised to take the bill to conference once it was passed back to the lower chamber, he worried that there was a chance it might be passed “as is.”

Most intriguingly, McCain said, “We must now return to the correct way of legislating and send the bill back to committee, hold hearings, receive input from both sides of aisle, heed the recommendations of nation’s governors, and produce a bill that finally delivers affordable health care for the American people. We must do the hard work our citizens expect of us and deserve.”

The last portion of the Arizona senator’s statement is very much in sync with the impassioned plea of his close friend and colleague, Senate Minority Leader Charles Schumer. Schumer said shortly before the vote was taken, “There’s a lot of anger on the other side at the ACA [i.e., the Affordable Care Act].  I understand that, but you’re repeating what you claim are the same mistakes. And just as maybe Obamacare could have been made better were it a bipartisan proposal, this one certainly would have been made better.”

“I would plead once more with my colleagues, let’s start over,” Schumer added. “We are the first to admit that the present law needs some changes. We are the first to want—maybe having learned our own lesson—that it should be done in a bipartisan and sharing way.”

The old guard in the Senate placed process over policy.

A vindictive motive behind McCain’s ‘no’ vote?

The U.K. Guardian is suggesting that perhaps McCain’s pivotal ‘no’ vote was meant to deliver  “a black eye to President Trump, who infamously mocked him as ‘not a war hero’ during the 2016 campaign,” denying the President an important win for his administration.

Candidate Trump famously said of McCain in 2015, “He was a war hero because he was captured.  I like people who weren’t captured.”  McCain is a decorated navy veteran who was tortured by the Viet Cong during five and a half years of captivity during the Vietnam war.

The success of the ‘skinny bill’ would have diverted attention from what is being called a White House mired in disarray.

McCain’s vote, which gave rise to so much glee from Senate Democrats, torpedoed President Trump’s campaign promise to repeal Obamacare, depriving the president of a much-wanted major legislative victory.