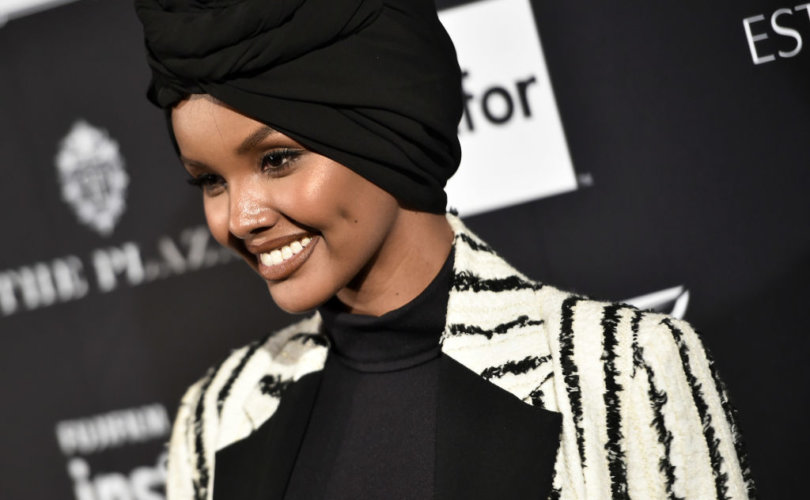 Washington, D.C.,  May 2, 2019 (LifeSiteNews) – The latest Sports Illustrated Swimsuit Issue hitting stores next week will not feature a barely-clothed woman on its front cover but instead a Muslim woman clad in hijab and burkini. Somali-American Halima Aden will be featured in the magazine's May 8 issue.

The National Center on Sexual Exploitation (NCOSE), which has denounced Sports Illustrated in the past for its legacy of sexual objectification of women, is calling out the magazine for its “crass exploitation of cultural diversity to sanitize its actions.” Hijab and burkini model gimmicks notwithstanding, the 2019 Sports Illustrated’s Swimsuit Issue carries on what NCOSE calls its “sexist and repugnant tradition” of normalizing and profiting from the sexual objectification of women.

“To say we are used to Sports Illustrated’s (SI) raw sexual exploitation and pornification of women is sad but true. But SI’s exploitation of the hijab and burkini to feign cultural relevancy shows just how far it will go to sanitize its actions,” said Dawn Hawkins, Executive Director of the National Center on Sexual Exploitation. “With its 2019 Swimsuit Issue, SI sinks to a new low in its crass exploitation of cultural diversity.”

Hawkins continued, “This year SI shrewdly peddles the idea that featuring a model lounging seductively on a beach while clothed modestly in a hijab and burkini is a celebration of diversity and women’s empowerment. Clothing a SI swimsuit model is, indeed, a novel and welcome development, but what is not, is SI’s phony brand of female empowerment. As per usual, SI’s reductionist version of ‘female empowerment’ perpetuates the message that women exist as mere props for male sexual fantasies.”

“The Sports Illustrated Swimsuit Issues’ legacy of sexual exploitation has rightly earned it a place on the National Center on Sexual Exploitation’s 2019 Dirty Dozen List. NCOSE calls on all retailers to remove it from checkout lanes. We are also especially grateful to retailers like CVS which, out of concerns about female objectification, decided last year to remove this annual publication from their checkout areas and promotional displays,” Hawkins concluded.

Since 1964 the Sports Illustrated Swimsuit Issue has sexually objectified women for sport and profit. NCOSE is asking the public to demand that companies like Target, Walgreens, and Safeway stop profiting from blatant sexual objectification by removing the Swimsuit Issue from their stores. NCOSE holds that patrons have a right to shop free from exposure to soft-core pornography in the checkout line.