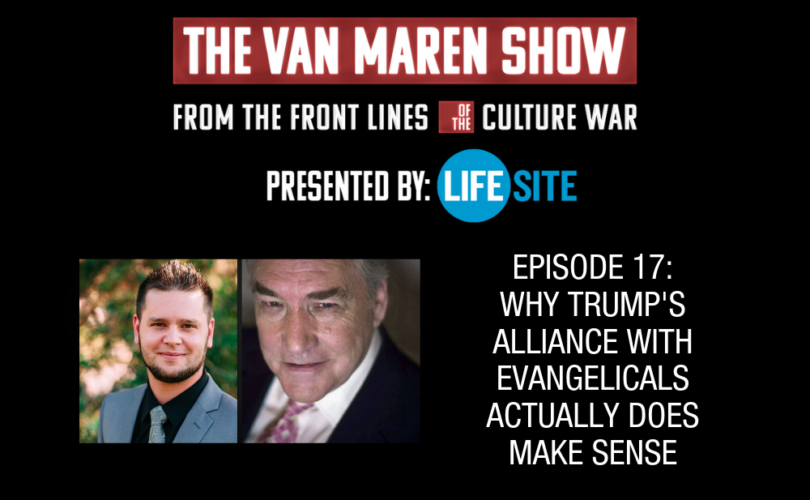 May 15, 2019 (LifeSiteNews) – Lord Conrad Black is most well-known for being the former publisher of The London Daily Telegraph, The Spectator, The Chicago Sun-Times, The Jerusalem Post, and the founder of Canada’s National Post. As a commentator on both TV and radio, he has been one of the primary defenders of President Donald Trump.

In addition to his recent biography of Trump, he’s written authoritative biographies on Franklin Roosevelt and Richard Nixon, who he also knew personally.

In this episode of The Van Maren Show, Jonathon Van Maren and Black have a conversation specifically about Donald Trump, starting with the most obvious question, “What made you write a biography about President Donald J. Trump?” (Listen below.)

Black moves between talking about Trump’s personal life and his political one. He even answers questions about the unique alliance between American Evangelicals and Trump, a man whose personal life wouldn't suggest that he's an obvious Christian ally.

“I think they see him as a good president for them. He is. He is in communities comparatively opposed to abortion.” Lord Black went on to say that, “Trump is an unwavering upholder, at least in contest with the Democrats, of basically any religious person of the Judeo-Christian faith.”

During the course of the discussion, you’ll get a brief look into Donald Trump’s background that influences his conservative-center political views, why he decided to run for president, and the political field he’s navigating currently.

Lord Conrad Black does mention toward the end of the conversation that there are plans for a reprint of the biography, “Donald J. Trump, A President Like No Other” that will be published as the United States gets closer to the election.