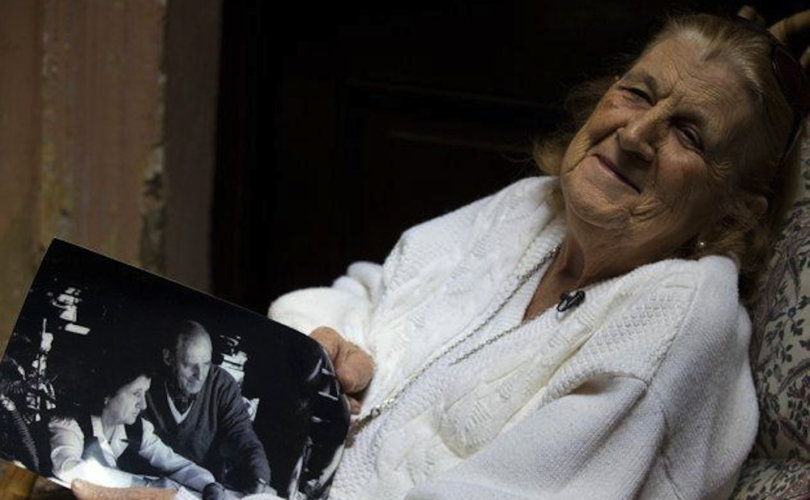 April 4, 2017 (LifeSiteNews) — In a 2013 interview conducted seven months before her death, Clelia Luro, a radical feminist and the “widow” of a disgraced Argentinian bishop, predicted that her friend Pope Francis would suggest an end to mandatory celibacy for priests.

Last month, the Pope did just that in an interview conducted with the German newspaper Die Zeit.

Luro became infamous beginning in 1966 when, as a 39-year-old mother of six who was separated from her husband, she began a romantic relationship with Bishop Jeronimo Podesta of the diocese of Avellaneda in Argentina. Podesta was an advocate of liberation theology.

Under pressure from Rome because of his relationship with Luro, Podesta resigned as bishop. In 1972, he was suspended, and “married” Luro. He was sometimes seen concelebrating Mass with her. Podesta founded and became president of the Latin American Federation of Married Priests and Their Wives and dedicated the rest of his life to ending priestly celibacy.

Podesta and Luro came to know Pope Francis — then Cardinal Jorge Bergoglio — when Podesta was dying in 2000. Bergoglio spoke with Podesta by phone and visited him in the hospital.

After Podesta died, Cardinal Bergoglio befriended Luro. He called her every Sunday for the next 12 years and spoke with her after he became Pope in 2013. Bergoglio would speak to Luro, who has been described as being “about as far to the left on the ecclesial spectrum as you can go,” about the Church and politics.

Because of their many conversations, Luro got an unique insight into Pope Francis’ position on ending priestly celibacy, for which Luro continued to campaign right up to her death.

“I think it’s going to very hard for him to do it, although I know very well what he thinks and what he wants, because he’s talked a lot with me,” she stated in an interview in 2013. “I’ve sent him a lot of the married priests’ material and I know perfectly that he has behaved very well with his married priests – he’s helped them find work, get a house, things the [Church] doesn’t do.”

In a 2010 book entitled On Heaven and Earth, Cardinal Bergoglio said,  “For the moment, I’m in favor of maintaining celibacy, with its pros and cons, because there have been 10 centuries of good experiences rather than failures.” He added, however, that priestly celibacy was “a question of discipline, not of faith” and that it “could change.”

With Pope Francis’ election in 2013, Luro believed the time had come for such a change. She told an interviewer “I think in time priestly celibacy will become optional. I’m sure that Francis will suggest it.”

Luro proved prophetic as Pope Francis indicated his openness to a married priesthood less than a month ago. “We have to think about if the viri probati are a possibility,” he said. “Then we also have to discern which tasks they can take on, for example, in forlorn communities.”

Viri probati is Latin for “proven men” or “tested men.” The Pope is referring to the idea that virtuous married men could be ordained as priests.

Pope Francis answered affirmatively when asked whether the time had come to consider loosening or abolishing priestly celibacy: “In the Church, it always counts to discern the right moment, to recognize when the Holy Spirit is asking for something. That is why I say that we are thinking about the viri probati.”

While Pope Francis dated the inception of priestly celibacy to 10 centuries ago, the practice actually goes back to the early Church. While Peter and some other Apostles were married, tradition indicates that they led celibate lives after they were called by Jesus. The Council of Elvira held in Spain in the early fourth century required all clergy to abstain “from their wives and not to have children.”

Priestly celibacy is directly tied to the Catholic teaching that the priest is an “alter Christus” – another Christ. When the priest consecrates the bread and wine at Mass, forgives sins in the confessional or confects the other sacraments, it is Christ, the great High Priest, acting through him. The Church came to understand that just as Christ consecrated Himself entirely to God by remaining celibate, so too should any man who wishes a share in His Priesthood.

While the laws on celibacy preclude priests from becoming natural fathers, they assist them in becoming spiritual ones. As Pope Pius XII beautifully stated: “… It is precisely because he should be free from preoccupation with worldly things to dedicate himself entirely to the divine service, that the Church has established the law of celibacy, thus making it ever more manifest to all peoples that the priest is a minister of God and the father of souls. By his law of celibacy, the priest, so far from losing the gift and duties of fatherhood, rather increases them immeasurably, for, although he does not beget progeny for this passing life of earth, he begets children for that life which is heavenly and eternal. The more resplendent priestly chastity is, so much the more does the sacred minister become, together with Christ, 'a pure victim, a holy victim, an immaculate victim.”

Clelia Luro correctly predicted that her friend Pope Francis would suggest changes to Church practice on priestly celibacy. Will she also be proved right in her belief that “in time” the venerable Catholic tradition of priestly celibacy “will become optional?”