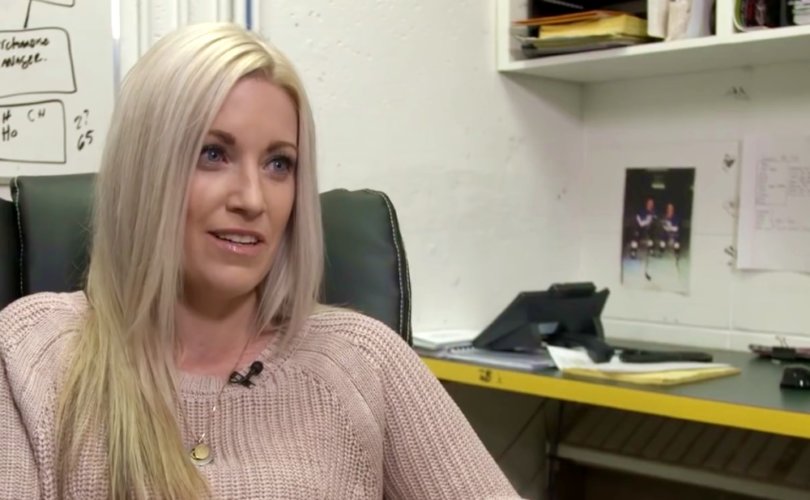 HUMBOLDT, Saskatchewan, April 20, 2018 (LifeSiteNews) – The wife of a junior hockey coach killed in a traffic accident this month says in a recent interview her husband’s devotion to Jesus Christ has been her and her children’s rock in the wake of the tragedy.

Ten of the survivors remain hospitalized, with two in critical condition. The driver of the semi was unharmed, and the Royal Canadian Mounted Police say an investigation into the accident’s “unanswered questions” is receiving top priority.

On April 11, Context with Lorna Dueck released an exclusive interview with Haugan’s widow, Christina Haugan. She detailed her husband’s character, and told Context’s Molly Thomas how his deep faith continued to help her and her two sons cope with the tragedy.

“You’d think he’d be easy to describe because he had so many good qualities, but I think that actually makes it harder,” she said. “He had kind eyes…and if you could see his eyes they were his soul, like you could see how kind he was.” She added that he was a generous man who devoted maximum effort to every player on the team, and who “bought me pretty much everything you will ever see me wear.”

Christina recounted to Thomas the harrowing wait between hearing about an accident and confirming the news. After getting in touch with someone not on the bus who confirmed there had been a serious accident, she says she “sat at home and paced and waited and prayed, waiting for any news, and kept phoning people,” but the most she could get from her contacts was “we just know it’s bad.”

Finally, the Broncos’ team chaplain called her at 12:30 and said, “I can’t tell you officially, but Darcy’s gone.” Police came to her home a few hours later and confirmed the news.

Next came the task of breaking the news to her two sons, for which Christina said she leaned heavily on her family’s faith.

Regardless of how hard a day Darcy had, she said he would do pre-bedtime devotions with his children every night, always with the same message. “I don’t care if you play hockey, I don’t care what your job is, I don’t care about any of that. All I care is that you follow Jesus,” she paraphrased.

Christina said she used to ask him to “change up the message” from time to time, but now she found herself relying on it. “That was all he cared about…so that’s what I told them. ‘Daddy’s gone, but we’re gonna follow Jesus and we’re gonna see him again,’” she recalled. “Cause that’s all we can do now, right.’ ‘Cause we will see him again, and that’s, I guess, the only thing holding [us] on.”

She shared that her nine-year-old son told her the night before, “I feel like half my heart is gone. It feels broken.” She said all they could do was take things one day at a time.

The effort her husband gave to his players turned out to be a source of comfort, too.

“I’ve been getting a million messages and stuff, but the ones that I really, really love are the ones from a lot of his old players,” Christina said. “And they keep telling me what an impact he made on their lives, and the support that they’re giving us, you know, is just incredible.”

Others agreed that Darcy Haugan was a man of deep character.

“As a coach we know that what happens on the ice is not nearly as important as when players took their skates off outside,” his brother-in-law Adam George said during a memorial service at Elgar Peterson Arena. “He worked hard to lead the young men in his care to become people who live their lives with integrity.”

A GoFundMe to support Christina Haugan, established by Darcy’s childhood friend Jason Schroeder, has raised more than $106,000. A GoFundMe for all of the accident’s victims and their families closed at more than $15 million.