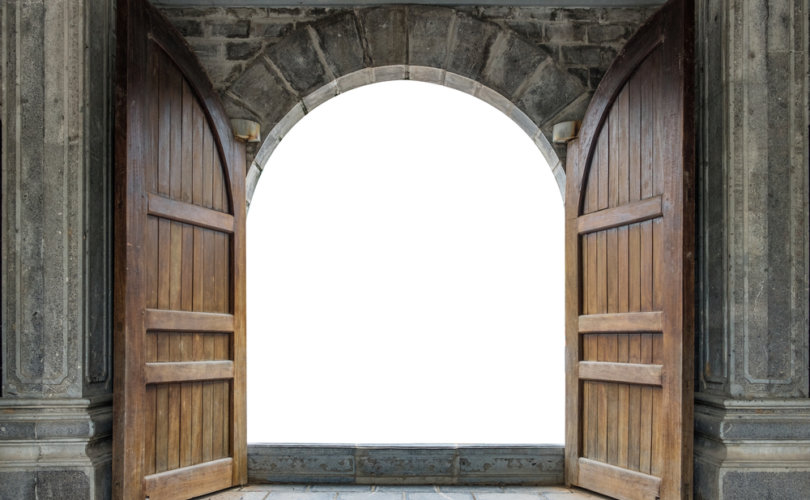 EDMONTON, Alberta, February 23, 2021 (LifeSiteNews) – The wife of incarcerated Canadian Pastor James Coates said to a large crowd gathered at the jail where her husband is being held that the best way to protest her husband’s imprisonment is to “open your churches.”

Erin told the crowd of hundreds of supportive protestors, gathered at Edmonton Remand Centre (where her husband is being held), that it was “overwhelming” to receive so much support.

Coates is the pastor of Grace Life Church (Grace Life) located in Spruce Grove, Alberta, which is close to Alberta’s capital city, Edmonton.

Leading up to this date, AHS had claimed that Grace Life was not following attendance limit sizes in place, and not following masking or physical distancing rules.

Coates was notified last week by the RCMP that they planned to arrest him for defying the COVID-19 shutdown order and asked him to turn himself in. Coates complied and was jailed for ministering to his congregation.

He remains in prison, awaiting trial, after refusing to agree to bail conditions that he agree not to hold more church services that violate government restrictions justified by COVID-19.

Aylmer, Ontario, Church of God Pastor Henry Hildebrandt made the trip to Edmonton to be at the protest in support of Coates. He said on Twitter that he was “happy” to see “so many Christian freedom fighters come to the maximum security Remand Centre today,” to fight for religious freedom.

Hildebrandt shared the video of Coates’ wife Erin’s plea to the supporters gathered. During her impassioned speech, she told the protestors to be champions for Christ, saying to be kind to those who “oppose us.”

“Be kind to those who oppose us because we’re doing this in love, and they’re not going to understand it, they didn’t understand Christ, they won’t understand us either,” said Erin.

“But that’s OK because we love them anyway so go on my brothers and sisters with boldness proclaim the gospel use every opportunity to share what He has done in your life and who He is because there’s eternal souls at risk right now.”

Last week, the Premier of Alberta Premier Jason Kenney released a statement regarding the jailing of Coates, saying his imprisonment is “unfortunate,” but that Coates had “flagrantly” violated COVID rules.

Kenney went on to proclaim that he is protecting “fundamental freedoms of religion” in his province, despite the fact that Coates remains behind bars.

Coates has been charged with contravening the orders put in place by Alberta’s chief medical officer of health (CMOH), Dr. Deena Hinshaw, and with “breaching an undertaking, even though he did not agree to the undertaking,” according to the JCCF.

At the protest, Coates wife Erin also encouraged the crowd to listen to her jailed husband's last sermon, which was given on February 14 and is posted on Grace Life’s YouTube channel.

Kenney took aim at Coates sermon. He said during a talk-show interview with radio host, and former Alberta MLA Danielle Smith, that Coates is irresponsible for delivering “libertarian sermons” during COVID-19, noting that he would not get involved in what he considers to be a “legal case.”

Grace Life can hold nearly 400 congregants, and this past Sunday, in direct contravention of its AHS orders to stay shut,  held a packed church service once again.

Under the current Alberta COVID rules, churches and other places of worship can operate at no more than 15 percent of the capacity allowed by the building fire code. Masks are mandatory, as are the sanitation of hands and keeping away from other people.

Support for Pastor Coates was also shown at other protests held in Alberta the same day. On Saturday, protesters gathered at the Alberta Legislature in Edmonton, at which support for Coates was voiced.

Also on the same day, an anti-lockdown protest was held in Medicine Hat outside the office of Alberta United Conservative Party (UCP) MLA Drew Barnes in opposition of lockdowns.

Barnes has been one of the few Alberta MLAs from Kenney’s government who has publicly voiced opposition to his government's COVID-19 lockdowns.

“This is about Alberta’s future, this is about creating the type of future where its faith not fear, where its about families….self reliance.”

LifeSiteNews asks its readers to take the time to defend the religious liberty of Canadians by filing out our VoterVoice Alert to free Pastor Coates.

All letters will be opened and read.