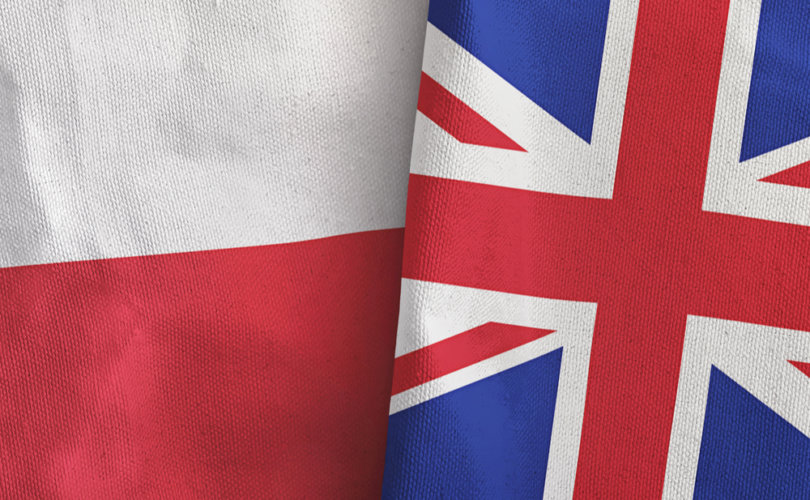 Folded flags of Poland and the UKShutterstock

UPDATE, Jan. 21, 2021, 6:05 p.m.: Poland’s state news service is reporting that it is a “matter of hours” before RS is issued a diplomatic passport by the Polish government. According to TVP.pl, Poland’s deputy Minister of Justice, Marcin Wachoł, stated that the passport is “being prepared.” Wachoł explained that this passport will remove RS from the juridiction of the British courts.” Meanwhile, he confirmed that a helicopter is waiting to return RS to Poland.

It is not yet clear whether diplomatic status, in the eyes of the British courts, will take precedence over what the courts have repeatedly called RS’s “best interests.” As RS has a serious disorder of consciousness, the British courts have, since December 15, adamantly insisted that RS’s “best interests” are to be removed from clinically assisted nutrition and hydration and given palliative care until he is dead. LifeSiteNews heard this evening that RS was expected to be dead by Monday. However, he has survived. “We don’t know how much longer my brother can hang on,” wrote one of his sisters this morning in a tweet aimed at several Polish authorities, including President Duda and Prime Minister Morawiecki.

WARSAW, Poland, January 20, 2021 (LifeSiteNews) — In a desperate attempt to save a Polish national from death by dehydration and starvation in a British hospital, the Polish Minister of Foreign Affairs, Zbigniew Rau, has proposed granting him diplomatic status.

“In regards to the matter of the Polish citizen staying in a hospital in Plymouth, Great Britain, I inform you that I am taking all possible steps to have him granted diplomatic status,” he tweeted earlier today.

The announcement, not surprisingly, was greeted with a chorus of “Hurry up!” The patient in question, known to the English-speaking world only as “P” or “RS,” has been deprived of hydration and nutrition since Thursday.

Also today, bishops writing on behalf of Cardinal Nichols, the president of the Catholic Bishops’ Conference of England and Wales, have asked the U.K.’s Minister of Health Matt Hancock to facilitate moving RS to Poland, where he will be cared for.

The RS case has thrown in sharp relief the legal and cultural differences between RS’s adopted country of Great Britain and his predominantly Catholic homeland of Poland. In a recent letter to England’s Cardinal Vincent Nichols, Poland’s most senior churchman, Archbishop Stanisław Gądecki, stated that RS, a devout, pro-life Catholic, “was, de facto, sentenced to death of starvation.”

However, the English Court of Protection judge who decided that RS’s life could lawfully end this way believes that this was in RS’s “best interests.”

Justice Cohen has also expressed grave concern over the publication of videos of “RS” showing him disabled in his hospital bed, and for the repeated cessation and continuation of RS’s treatment, suggesting that there could be no greater insult to the patient’s dignity.

However, Polish individuals and Polish media organizations have been publishing the videos to bring public attention to RS’s impending death by dehydration and starvation, one unthinkable in majority-Catholic Poland.

— Article continues below Petition —
UPDATE: Polish pro-life Catholic passes away in British hospital after being denied food and water (+RIP)
Show Petition Text
29784 have signed the petition.
Let's get to 30000!
Thank you for signing this petition!
Add your signature:
Show Petition Text

Cohen made his remarks as Polish consular authorities were on their way to, or already arrived at, the English hospital in which RS was, and is, dying, to facilitate a remote medical examination by a Polish doctor. The NHS had made an emergency application to the Court to prevent this examination from happening.

In opposing the application, barrister James Bogle argued that the patient had a right to the visit by Polish consular authorities. Notably, the Vienna Convention on Diplomatic Relations, which Bogle cited, conceived of such a visit in a prison, not a hospital.

Although the patient sustained severe brain-damage after suffering a heart attack in early November, his doctors believe that he could live for another five years or more as long as he received clinically assisted water and hydration. However, in mid-December a court decided that it was not in RS’s best interests to continue living. Justice Cohen gave permission to the National Health Service (NHS) Trust and RS’s wife to “decide between themselves whether hydration is to be withdrawn.”

RS’s birth family, including his mother, two sisters and niece, have all opposed the cessation of RS’s life-sustaining treatment, firstly on the grounds that as a devout Catholic who opposed abortion, euthanasia and the court’s decision to end the life of Alfie Evans, RS would not want to die that way. They next argued that video footage they took of RS showed that he was recovering to some extent from his brain injury and was not in a vegetative, but in a minimally conscious state.

RS’s wife, however, has sided with the NHS in its opinion that RS’s life should come to an end. Although the Polish public has been appealing to political and religious leaders both British and Polish to save RS, there may be only one person who now has the power of life and death over the sick man: his wife.

To read LifeSiteNews’ detailed and up-to-date coverage of the RS case, please click on this link.

Readers may also donate and help the legal battle to keep RS alive at LifeSiteNews’ LifeFunder.