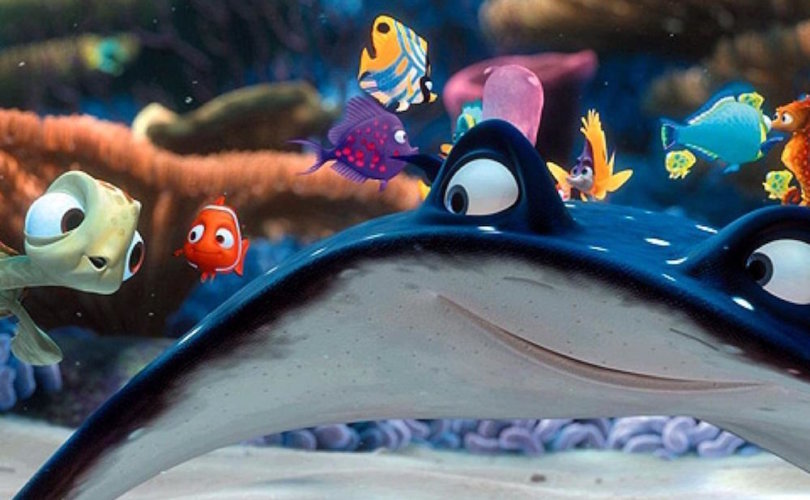 HOLLYWOOD, June 15, 2016 (LifeSiteNews) – After the trailer for Finding Dory, the much-hyped sequel to Finding Nemo, led to speculation that Disney-Pixar was introducing its first openly homosexual characters, the lead voice actress on the film says it will feature a “transgender” character instead. However, it’s not clear in the interview if the comedian was joking.

Ellen Degeneres, who is the voice for Dory, revealed the “secret” in an interview with USA Today. She says the “Sting Ray” character will turn into “Sting Rhonda,” finding his “real” self as a female.

“I’ll tell you a little secret,” the popular lesbian comedian and talk show host said.  “There’s a stingray that’s becoming sting-Rhonda, so there’s a Trans-Sting in the movie.”

In the original Finding Nemo, there is a prominent character named “Mr. Ray,” a stingray. However, it’s not clear if this is the character to which Degeneres was referring.

A trailer for the cartoon also shows two women walking together pushing a baby in a stroller, leading some viewers to wonder if the characters are the first openly homosexual couple in a Disney animated feature. But some reports have indicated the pair’s appearance in the film is so brief that it may not be clear.

The Finding Dory announcement comes on the heels of two Twitter campaigns by gay activists, demanding the Disney company make Frozen's Elsa into a lesbian, and Captain America into a homosexual.

Finding Dory producer Lindsay Collins offered a very strange response to questions about the same-sex couple with a baby.  “We don't ask everybody's background when we put them in our movie,” she said of a cartoon character.  “So if it were a main character, I think we would know the answer to that question. It's not. It's part of the world we see, so maybe.”

Director Andrew Stanton said, “We have no problem with whatever you want it (the two women with the baby) to be.”

“It's unclear exactly what Disney is doing, but the company has been under enormous pressure to turn its wholesome movies into pro-LGBT propaganda,” Media Research Center (MRC) Vice President Dan Gainor told LifeSiteNews.  “The left has pushed for a gay character in the Frozen sequel and a boyfriend for Capt. America in the Marvel franchise, also owned by Disney. Now this.”

“What is clear is Disney is no longer the family-friendly firm that Walt Disney used to create cultural icons,” the MRC Vice President for Business and Culture continued.

“Liberals have pushed the company to the Left, to the point where it threatened to move filming out of Georgia over that state's religious liberty laws,” Gainor pointed out.  “If Disney gives in to the gay agenda –whether it's with ‘Finding Dory’ or some other film– the company will be rejecting everything it stood for in family entertainment.”

Does Disney-Pixar’s new Finding Dory trailer show a lesbian couple?
Gay activists lobby Disney to make Elsa a lesbian in Frozen 2
Warning to parents: pro-gay cartoons are on the rise
Beauty and the Beast and the wildness of domesticity