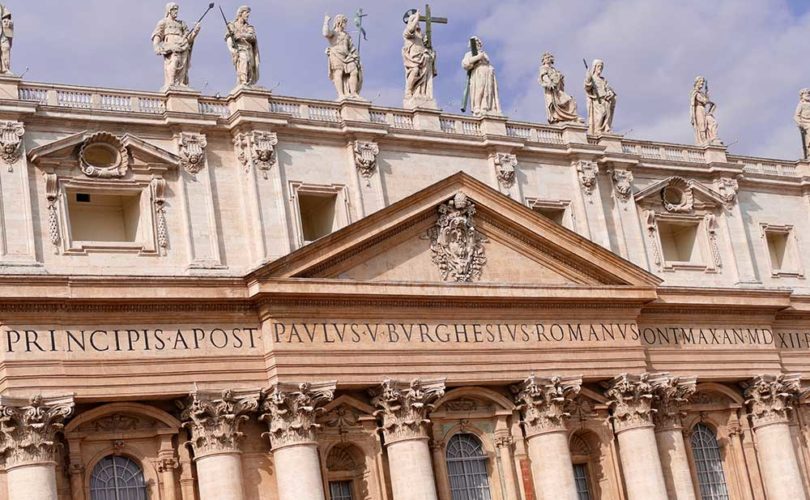 ROME, October 19, 2015 (LifeSiteNews) — The Vatican's press spokesmen during the Synod on the Family this month have repeatedly stressed that the atmosphere among the bishops is overwhelmingly positive and collegial, apparently countering perceptions of a fierce battle over the Church's doctrines and practices. For example, British Cardinal Vincent Nichols told reporters at a Synod press conference he had “no sense of negativity in the Synod, ” and American Archbishop Blase Cupich said he didn’t have “any anxiety at all” in the Synod.

But this false veneer of non-confrontation was torn off last week.

Thanks to Voice of the Family, which was granted permission to publish it, the world knows of Archbishop Tomash Peta’s Synod intervention in which he said “the smoke of Satan” was trying to enter the Synod through:

However, Brisbane Archbishop Mark Coleridge has revealed that Archbishop Peta wasn’t the only Synod Father who spoke about the “smoke of Satan” having entered the Church via the Synod. According to Coleridge, another (unnamed) Synod Father hit back at Archbishop Peta saying the “smoke of Satan” would enter the Synod “if we succumbed to an anxious and ideologically driven spirit of partisanship that violated the communion of the episcopal college and the Church and reduced the Synod to no more than a political cause where power is what really matters. Satan is 'diabolos', the separator.”

It would be most interesting to learn the identity of this Synod Father who sees in Archbishop Peta’s fight for truth the work of Satan. (Please send your answer to [email protected].)

The Polish are fighting

One of the most informative sites detailing insider information on the Synod is actually run by the head of the Polish Bishops Conference, Archbishop Stanisław Gądecki. He was initially criticized for publishing the most interesting comments and revealing who said what, but then took down that post and began posting the statements without names. Non-Polish speakers need not be left out on the fun as long as they tune in to the TorontoCatholicWitness blog, which told LifeSite they’re keeping on top of Archbishop Gadecki’s every post.

And just so you realize how vital that is, their latest post reveals that the good archbishop has called the bad guys’ bluff at the Synod.  “Practically all are repeating that there will be no doctrinal change, but this is understood in different ways,” said Archbishop Gadecki. “For if you add to this first group that disciplinary changes are possible, this means, in practice, that doctrinal stability is being nullified.”

In my opinion one cannot speak of the separation of the practice of the Church from her doctrine, from her teachings. The two are inseparable. I have the impression that many supporters of this modernity, are in fact thinking about changing doctrine, yet calling it a change in Church discipline. It is a disturbing point in these discussions, for it is strongly emphasized: “we accept the entire doctrine”, but there immediately follows a suggestion that doctrine has nothing to do with it.  This is greatly worrying me, for one and the other are saying that they want no change in doctrine. From where then, are arising these practices opposed to doctrine?

And speaking of the good guys fighting, we’ve heard that the African Fathers are sticking to holding up the faith handed on to them by the nations whose bishops are now abandoning it. The eastern Europeans and some Latin Americans are also standing strong.

But my all-time favorite intervention was one we found in the presentations of auditors published on the Vatican press page.  Romanian doctor Anca-Maria Cernea spoke as a mother, a doctor and a Catholic letting the Synod Fathers know in no uncertain terms to remain Catholic. Once posted on LifeSite, her presentation went viral everywhere.

Very shortly, we will post on LifeSite our filmed interview with her where she goes into more detail on the reasons behind her message to the Synod.

At the start of the week, a Synod Father from Germany took to the press conference microphone to suggest allowing local conferences to deal with issues such as divorce and homosexuality.

By the end of this week something had changed. Synod Fathers promoting heresy were just coming out and saying so as if it wasn’t so bad after all.  First there was Archbishop Cupich’s press conference where he noted that because of one’s “inviolable conscience”, Catholics may receive communion even if remarried. When I followed up asking him if it would also apply to those in homosexual relationships, he said: “I think that gay people are human beings too and they have a conscience.”

Joining Cupich in the straight up un-Catholic talk by the end of the week was Cardinal Reinhard Marx. Catholic News Agency was the first out with his statement actually specifying he was proposing communion for the divorced and re-married who were in a “canonically valid marriage” without possibility of annulment.

While the official talk at the Synod is all about openness, and heretics are seemingly comfortable enough to express themselves freely, some traditional Synod Fathers have felt the need to express their concerns anonymously. A good source for those anonymous quotes is the National Catholic Register’s Ed Pentin, the famed Rome reporter who revealed Cardinal Kasper’s anti-African rant and the author of The Rigging of a Vatican Synod, whose Twitter feed is regularly updated with such quotes:

If you’re looking for the good things happening regarding the Synod you can find them on LifeSite, such as our interview with Cardinal Burke clearing up confusions, and more interviews coming in the next few days. Those desiring clear answers as to why bishops’ conferences cannot decide doctrinal issues can see Burke’s answers here. For all of LifeSite’s Synod coverage in one handy place click here.

The best news of the week of course was the Letter from 13 Cardinals with the two principals being curial Cardinals George Pell and Gerhard Mueller. Despite the fact that the Vatican press office did everything possible to quell the news, it spread nonetheless. The near-identical talking points of Archbishops Nichols and Cupich give the distinct impression of a cover up, saying things like, “It has not had the slightest effect,” and “I think it has had no impact at all on the Synod.”

The indispensible Rorate Caeli blog has covered this in great depth and has this report on the “magnificent document.” It reveals that, contrary to the assertions of the “progressives,” the letter had “huge historic significance” and “promises to be foundational in the 21st-Century papacy.”

The most important thing to remember now as the Synod enters its final week is that Monday and Tuesday are the days with the most crucial debates on the most contentious issues.

Prayer and fasting are needed for the Church now.  It’s all in God’s hands and thus we need not worry, but we do need to play our part and that means prayer and faithfulness.  It’s Monday October 19 at nearly 4 am here in Rome as I’m writing this. Please remember our three journalists here working at the Synod. It’s very demanding work and needs the grace of your prayers.