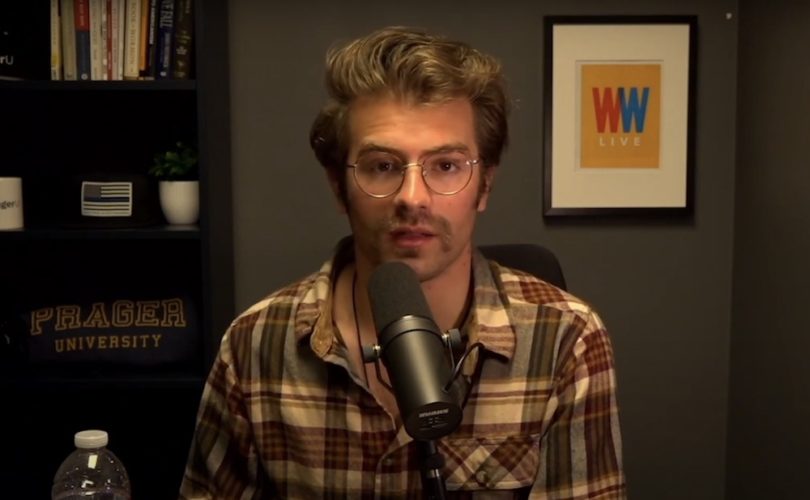 May 17, 2021 (LifeSiteNews) – PragerU presenter Will Witt addressed the Canadian March for Life Youth Conference on Friday, focusing his remarks on how to effectively dialogue with abortion supporters to wake them up to the truth of preborn humanity and the right to life.

Witt, who hosts a variety of videos and podcasts for conservative pundit Dennis Prager’s popular educational nonprofit, opened by talking about how open dialogue (along with a run-in with a far-left college professor) triggered his own evolution from liberal atheist to conservative Christian.

“It’s one thing to have a lot of facts,” but “if you can’t use those facts effectively to change minds, then it’s practically useless,” he explained. Noting that among his most popular videos is a series in which he descends on college campuses to grill the student body about their knowledge and beliefs, Witt shared that he is frequently asked how he resists getting mad or laughing at people his audience finds stupid.

Witt answered that part of the reason is the importance of recognizing that young liberal ignorance is in large part the result of “brainwashing” by schools, entertainment, etc., and another is that anger and mockery, in his view, are counterproductive when it comes to persuading people to change their minds.

For the bulk of his remarks, Witt referred audiences to a PragerU video in which he asks Los Angeles residents to sign a petition to protect baby eagle eggs, which elicits broad support; then presents those same people with a petition to protect preborn humans, which gets a very different reaction.

Instead of mocking or berating abortion supporters, Witt advised calmly asking questions to dismantle pro-abortion logic step-by-step, with the most powerful results coming from calmly and patiently leading people to change their own minds by patiently leading them to question their own prior assumptions.

Throughout the rest of the address, Witt detailed the standard pro-life responses to the usual pro-abortion talking points, from “my body, my choice” to the notion that men should have no say in the abortion debate. In particular, he advised pro-lifers to start by asking abortion supporters if they are comfortable with abortion at nine months, then gradually work their way through earlier gestational points, introducing fetal development facts along the way. Eventually, “you can get them all the way to zero,” Witt said.

“You have no idea how big the impact can be if you just speak out and have a conversation with someone,” Witt implored in his closing remarks.

Hundreds of Canadians gathered Thursday in Ottawa, Ontario for Canada’s March for Life, demanding “legal protection for every human being from conception to natural death.”