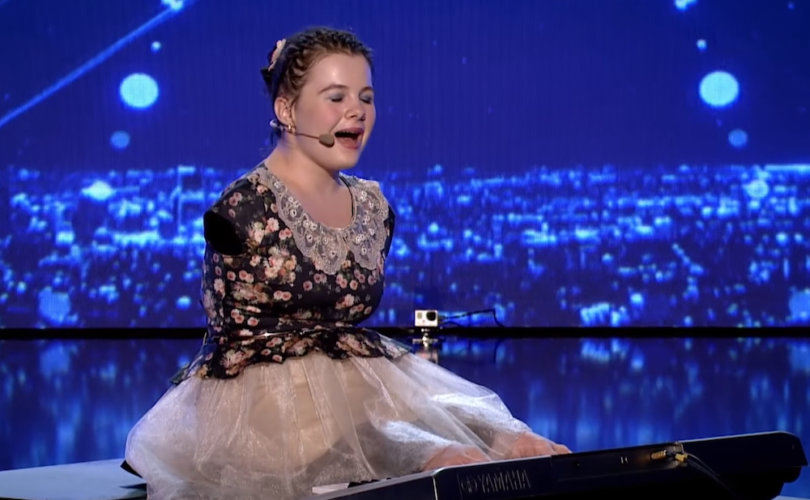 June 6, 2017 (Family News) — When she first showed up in front of the cameras at the live show, with her serene sweet face, she looked as a much smaller child. She is a short person because her legs miss about half their length. She was born with both her femurs missing – the bones which would have made the long upper part of her legs. Also, she has no arms.

She said she would sing. And play the piano. “Excuse me, how are you going to play the piano?” “With my feet,” she answered composedly. Then sang a song which received standing ovations from the public.

That is how a 14-year old disabled teenager amazed Romania for the first time on March 11, 2017, on the most widely watched show of the weekend, on Pro TV channel.

At that time, as the date for Romania’s March for Life was approaching, Alberta Mosnegutu’s appearance (Lorelai by her stage name) made a pro-life mother call people to express their support for unborn children, exclaiming on her blog:

Lorelai Mosnegutu is a child who HAD TO be born! She’s a Romanian we have every reason to be proud of! A child like all the other children – with a life just as important as mine or yours or my child’s life!

Romania is in a top where she does not have to be! And yet, Romania is second in the world in terms of total abortion numbers compared to its actual population.

My knees started shaking the moment I saw her cry and not able to wipe away her tears. Then I went to embrace her and realized she could not embrace me in return.

As the show went on, week by week, Romanians were introduced to an exceptional life story. Lorelai, by her real name Alberta, had been abandoned at birth like a broken toy, after the doctors estimated she would only live for a few days.

She was saved by “Mother Vio.” By her real name, Veronica Parvulescu, “Mother Vio” is a foster parent who cared for the abandoned child. She started putting a pencil between the girl’s toes when she was only six months old. Then she did not cease to believe in her, despite the fact that the child did not speak until she was 3 years old and did not walk until four. It was Mother Vio’s love and trust that enabled the girl to find and cultivate the native gift of her voice and do something meaningful with her life.

“My mission is to make the world happier through my writing and my songs,” says now Alberta, alias Lorelai. Nothing is easy for her, but this has taught her resilience. Her motto is “I fall ten times and I rise twenty times.” That further explains the title of the song she performed in the final stage of the contest: Rise like a Phoenix:

Romania’s Got Talent 2017 – The Final: Lorelai Mosnegutu performs the song Rise Like a Phoenix

She tearfully received the award with gratitude, meaning to get an apartment at ground level and with customized furniture, to invest in her singing career and to donate the rest.

Another blogger said she learned many things from Alberta Mosnegutu:

A wonderful coincidence was that Lorelai won the great award on June 2, 2017, the National Adoption Day in Romania. This is life repaying a favor to “Mother Vio.”

Reprinted with permission from Family News.