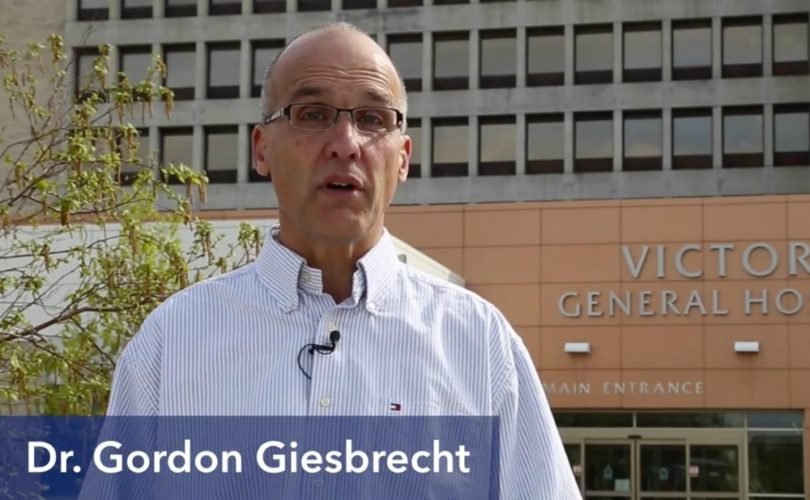 WINNIPEG, Manitoba, September 25, 2015 (LifeSiteNews) — A Winnipeg pro-life Conservative candidate is receiving mainstream flak after a video surfaced from six years ago in which he compared abortion numbers in North America to the number of victims of the 9/11 terrorist attack and to Jewish victims murdered in Nazi death camps in World War II.

Gordon Giesbrecht, a Winnipeg South Conservative candidate, who is also a physiologist and professor at the University of Manitoba, made the comments in a 2009 video published on a blog while he was the president of the Christian-based Horizon College & Seminary.

“‘To be or not to be.’ You’ve all heard that as a line in a Shakespearian play. Well, that’s also a question for which the answer is ‘no’ for many unborn fetuses in North America and around the world every year. Do you know how many? Let me put this in a perspective for you,” he says in the opening of the video.

Giesbrecht goes on to compare the number of abortions daily in North America as equal to “a 9/11 every day,” a number that he pointed out surpasses in the millions the number of Jews murdered by Nazis in WWII concentration camps.

“Since abortion became legal in North America several decades ago, over 42 million unborn babies have been aborted. That’s a 9/11 every day, for the past 35 years,” he said.

“That’s a very serious problem that confronts our youth in the world and in our churches,” he said. “Unfortunately, this issue is seldom, if ever, addressed in our churches today.”

“In no way does making such a comparison diminish the sense of injustice and barbarism visited upon the 6 million Jews, 3 million Polish Catholics, and other victims of Hitler’s hatred. His statements simply acknowledge that barbarism and injustice is being visited upon another class of voiceless human beings today. The numbers just can’t be denied, and Professor Giesbrecht was quite right in drawing the comparisons,” he told LifeSiteNews.

When LifeSiteNews asked Giesbrecht for comment, his campaign manager Olivia Baldwin-Valainis responded by phone that the Conservative Party position remains that the “debate on abortion is not one that’s going to be reopened under this government.” She said no further comment would be forthcoming.

Campaign Life Coalition has given Giesbrecht a “supportable” status on its election website, calling him “pro-life.” Of all the candidates running in the riding, he was the only one to fill a questionnaire in which he stated his position regarding life.

Giesbrecht stated that he believes that life “begins at conception” and that if elected he would support “all legislative or policy proposals that would result in a meaningful increase of respect and protection for unborn human life.”

Fonseca said that the comparison of the abortion industry to Nazi death camps should be used “more often.”

“Because they’re true,” he said.

Rather than hindering the Giesbrecht’s chances of becoming elected in the October election, Fonseca believes the exposure has done the candidate good.

“In the end, I believe the media has done Mr. Giesbrecht a big favour, and they’ve helped put him on the path to electoral victory. Average people in Winnipeg South believe that human life is sacred. This media spotlight on his past comments only serve to inform voters that he’s a man who stands up for fundamental human rights and the equal worth and dignity of every human being. As they say in show business, that’s good press,” he said.