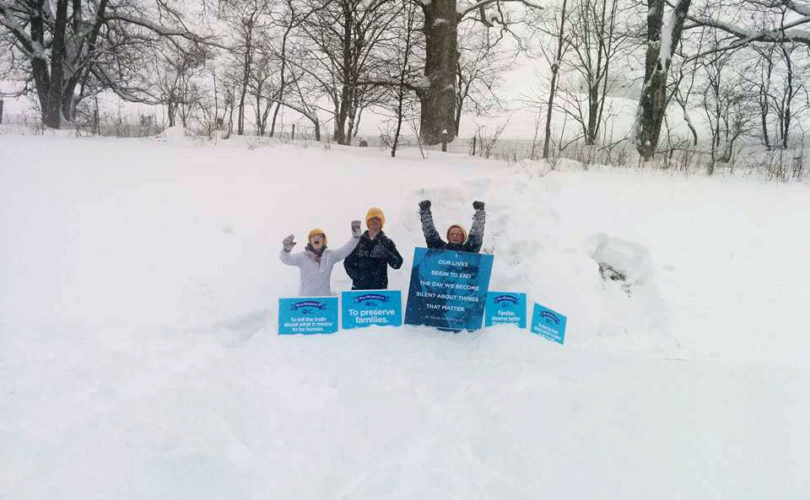 WASHINGTON, D.C., January 26, 2016 (LifeSiteNews) – The 2016 March for Life will go down in history as the year of the act of God for more than one reason, as a winter storm stranded countless pro-life pilgrims who traveled to Washington D.C. for the March. In His providence, they responded in faith wherever they were, with amazing results.

As a direct result of the storm and all that’s happened in its wake, the March for Life has received unprecedented coverage, and media outlets normally not friendly to the pro-life cause were forced to mention in their storm coverage the reason why so many people who were stranded had found themselves in the blizzard’s path.

The media coverage also shone a light on the pro-life movement’s foundation in faith.

Dozens and dozens of busses from dioceses and pro-life groups in Iowa, Michigan, Ohio, Nebraska, Missouri, North and South Dakota, Minnesota, Wisconsin and more were among thousands stranded on the Pennsylvania Turnpike after an accident blocked the highway around 9 p.m. Friday, the day of the March.

The pro-life pilgrims sat for many hours not knowing when they would get out, as food and water dwindled for some and bus bathrooms broke down for others. It would be roughly 24 hours before they were moving again, longer for many, as reports to LifeSiteNews indicated the back-up may have stretched some 30 miles.

Reports continually came to LifeSiteNews as well of how the pro-life students remained positive and used the opportunity for good and to put others first, doing such things as offering their food to other stranded motorists and using whatever they had handy to dig some of them out. These stories were also picked up across the media.

Perhaps the most famous story tied to the March and how it was affected by the storm was the impromptu Mass celebrated Saturday in a snowstorm with stranded pro-life priests, students and chaperones along the Pennsylvania Turnpike. Photos and video of the Turnpike Mass went viral and offered a powerful witness across the country, as reports exploded on social media of students building an altar of snow and singing at the Mass.

The effects of the young people’s witness were seen on social media, moving many, with one user posting, “This makes me proud to be Catholic!”

Adding to this are anecdotes of pro-life students saying how the suffering they encountered in being stranded in the snow for some 24 hours was nothing compared to the suffering unborn children experience when they are aborted. Many have stated despite the ordeal they would do it all over again.

Seventeen-year-old Karina Manriquez was at the March for Life for the first time, attending with the Sioux City Cathedral of the Epiphany youth group on one of the Iowans for LIFE buses, and Father Pat Behm, principal celebrant of the now famous Turnpike Mass.

Though she worried at first during the trip as reports of the storm got worse, Manriquez told the Sioux City Journal she had no regrets.

“People started to build stuff in the snow, and then they came and talked to Father Behm about Mass, and we all started to get really excited,” Manriquez said.

“I think, in a way, it proves our faith. That even with the hard times, we’re still here together,” she continued. “I don’t regret any of it.”

The Mass brought the Yankton, SD, group, with parishioners from Sacred Heart and St. Benedict Churches, even closer, one of the youth told the Yankton Daily Press and Dakotan.

“We slept on the floor of the bus overnight. We’ve been watching quite a few movies. We’ve been talking with friends, praying and doing things to keep us busy,” Savannah Frick said. “We celebrated Mass on the side of the highway, in the middle of the interstate. We all came together.”

“#turnpikemass coolest thing eva,” stated one tweet picked up by The Blaze. Another said,  ‬“Not even the snow will stop us from Jesus #TurnpikeMass,” and a third offered, “Just finished helping put on the #turnpikemass by building the altar. Best mass ever. Never seen so many Catholics so devoted.”

Because of the witness of the young people and its effects on others, the Turnpike Mass was also dubbed The Miracle in the Snow by Catholic media host Teresa Tomeo.

The Turnpike Mass has been picked up in secular media as well, with pro-life leaders and students being interviewed on their experience, and some unusually balanced coverage.

A report from the Pittsburgh Post-Gazette told of how students fashioned a cross from tree branches and quoted the Archdiocese of Omaha’s chancellor commending their students for standing up for a cause they believe in, also describing the March as a pro-life event and not “anti-abortion.”

While the Des Moines Register did resort to the anti-abortion label, the paper included numerous photos and Mass video in its report.

WGNtv.com shared social media posts from the Mass, simply letting them speak for themselves.

And at the same time the Omaha World-Herald put the term “pro-life” in quotes in its story, it covered the Mass and told of how the students behaved and passed the time, some going sledding on their March for Life signs.

The Omaha paper also reported that Archbishop George Lucas called and prayed with the students from his archdiocese Saturday morning over speakerphone, telling them that he was proud of their missionary and gospel spirit.

Some of the stranded pro-life Marchers were still making their way home on Monday, but most had done so by Sunday.

The pro-life witness wasn’t limited to those stuck on the turnpike in Pennsylvania.

Many still stranded in Washington D.C. have made the most of things, getting to know other pro-life supporters and networking within the movement.

On Saturday, as the buses of Marchers were sitting stranded in Pennsylvania, a few hundred pro-life pilgrims who had not made it out of D.C. gathered at the March for Life’s official hotel site for Mass celebrated by stranded priests and clergy. They’d also prayed the Divine Mercy Chaplet and held personal witnesses, with the Downtown Renaissance allowing them use of a ballroom at no charge.

The accounts continue to be told and will be for some time to come, with uplifting stories, how other people were affected by chance from the pro-lifers plans getting changed by the storm.

A Facebook post by Claudia Walker Mals published by the For America website told of how her niece, a freshman at John Carroll University in University Heights, Ohio, was among those stranded on the turnpike and who also attended the Mass, describing how the young people’s witness apparently moved their bus driver:

“At 7:30 last night (Saturday – as they began to get out) she sent this text: Bus driver said “I want you guys to know, I am not of your faith, but I am the co-pilot. The Lord is the pilot.” We are moving!”

There are also reports, one from a Lutheran pastor in Iowa, that some Washington D.C. hotels apparently gave the prepaid hotel rooms the pro-life Marchers wouldn’t be able to use because of leaving early to avoid the storm to homeless people for the night.

“I think the events of the highway being stuck out over night and everything got us national attention that the march itself didn't even get! So that was a blessing,” Pastor John Fries told the local NBC affiliate WHO-TV. “You know, they took our hotel rooms that we gave up but had already paid for to try to get out in time, and gave those to the homeless in Washington D.C. to help them get through the blizzard. So, God does work in mysterious ways.”

Father Behm had also heard of the hotel rooms being given to the homeless, and told Tomeo Monday on her radio program that while a lot of people were inconvenienced by being stranded, lives may have been saved by those hotel rooms.

Father Behm celebrated another Mass with the Iowans for LIFE group that arrived back in Des Moines around 5 p.m. Saturday before everyone departed amidst “lots of hugs,” the group’s Executive Director Maggie DeWitte told LifeSiteNews.

The full ripple effect of God’s plan for the storm and the March for Life may never be known.