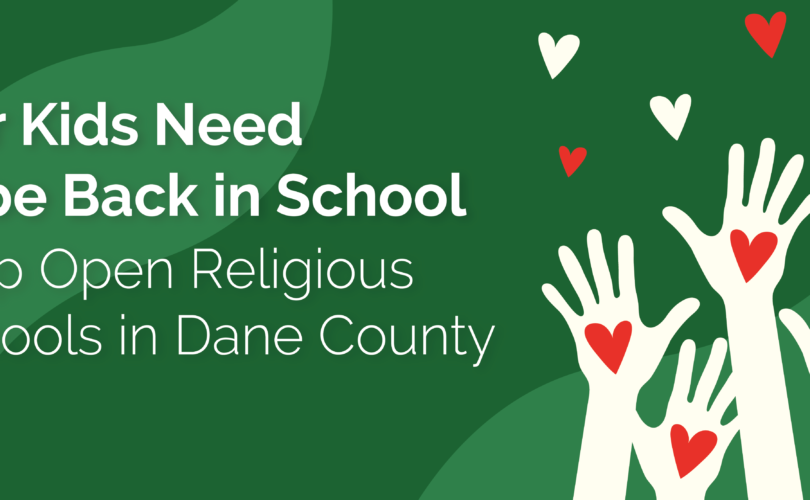 August 25, 2020 (LifeSiteNews) –– After a county in Wisconsin issued a last-minute order banning all in-person instruction for students in grades 3-12, Catholic schools have chosen to challenge the mandate.

Catholic schools, many of which had been slated to open on Monday, August 24, were taken by surprise when public health officials for Dane County issued a COVID-19 school closing order after the close of business hours on Friday, August 21.

“Dane County has dealt county religious schools a crushing blow by holding them to far higher standards than other businesses,” declared a statement issued Saturday.

Led by St. Ambrose Academy in Madison, a coalition of Catholic schools quickly formed to hire a law firm to fight the shutdown. A Saturday night Facebook posting announcing an emergency fundraising drive had by Tuesday morning collected more than $90,000 in donations to fuel the legal challenge.

“Our Kids Need to be Back in School, Help Open Religious Schools in Dane County,” declared the headlines on Facebook and at the crowdfunding site, givesendgo.com.

A statement issued by the group explained:

A group of plaintiffs including parents and St. Ambrose Academy are taking legal action to contest Public Health Madison & Dane County Emergency Order #9. The Order prohibits county schools from offering in-person religious education to students in grades 3-12, both now and in the indeterminate future. In-person learning is important to all children, but especially to low-income families, many of whom are served by religious schools.

The emergency order, the ninth of its kind, was issued at 5:18 p.m. on Friday, August 21, only days before St. Ambrose Academy was scheduled to reopen and a mere sixty hours before other religious schools were prepared to begin instruction. In issuing the Order, the County failed to take into account the extensive and comprehensive measures religious schools had put in place to ensure a safe reopening.

Despite the good faith efforts many religious schools have made in recent months to adhere to Dane County’s health guidelines to ensure the safe return of students and staff, by issuing Emergency Order #9, Dane County has dealt county religious schools a crushing blow by holding them to far higher standards than other businesses.

Emergency Order #9 directly impinges on families’ rights to provide a religious education for their children in accord with the dictates of their consciences.

“We are profoundly grateful and overwhelmed by the generosity of our donors who have joined us in this effort to keep religious schools open in Dane County,” wrote the fundraisers after donations reached $60,000 in just 19 hours.

“We are stunned and in awe at how God has moved so many hearts to support this critical cause,” they declared in a subsequent statement. “Each and every one of you has been an ENORMOUS BLESSING to this effort to keep religious schools open in Dane County for our children. Your financial, spiritual, and moral support have been an incredible witness to the strength of faith in each other and in God. We are AMAZED at what we’ve been able to accomplish together!”

“Because of your generosity, we are now able to confidently proceed with the first step in taking legal action,” they added.

After issuing the emergency order, Public Health Madison & Dane County outlined the metrics that would guide decisions regarding in-person instruction.

The coalition of Catholic schools plans to hire Troutman Pepper Hamilton Sanders LLP, the same law firm that aided the Diocese of Madison in defeating strict limits on Mass attendance due to COVID-19, according to Catholic World Report.

The firm plans to make an emergency appeal to the Wisconsin Supreme Court.