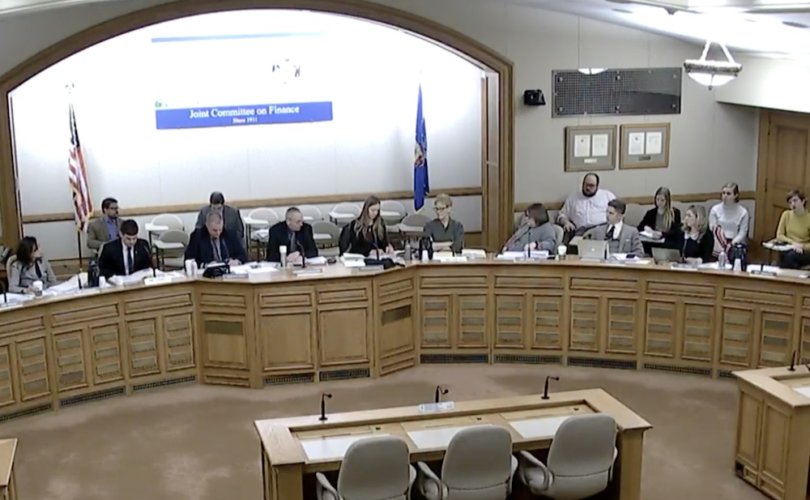 UPDATE, February 18, 2020, 10:24AM CST: This report has been updated to include the testimony of Personhood Alliance President Gualberto Garcia Jones.

MADISON, February 17, 2020 (LifeSiteNews) – Pro-life lawmakers, activists, and experts testified before the Wisconsin Legislature Thursday in support of a constitutional amendment that would establish personhood in the Badger State, and ensure the people and their legislature decide abortion laws rather than the judiciary.

Section 1 of Assembly Joint Resolution 130 would amend the Wisconsin Constitution to remove the word “born” from its language recognizing persons with “inherent rights” to “life, liberty and the pursuit of happiness,” and clarify that “as applied to the right to life, the term ‘persons’ shall apply to every human being at any stage of development, born or unborn.”

Supporters argue the amendment is necessary to prevent the Wisconsin Supreme Court from declaring a state-level “right” to abortion, as has happened in other states, which would gut existing pro-life laws and insulate legal abortion regardless of what happens to Roe v. Wade.

“It is truly shameful that the modern judicial leaders of Kansas and Iowa have found a right to kill innocent human beings in the inalienable right of liberty enshrined in their constitutions by their states’ founders,” declared Pro-Life Wisconsin legislative director Matt Sande.

“They did so by utterly ignoring the existence of preborn children; by depersonalizing them. If the Wisconsin Supreme Court loses its tenuous conservative majority, we can be assured that a new liberal majority will move quickly to find a right to abortion in the Wisconsin Constitution. As a practical matter, the Wisconsin Personhood Amendment is absolutely essential to protecting all of our state’s pro-life laws, now and in the future,” he added.

Lawmakers and witnesses debated the amendment at an Assembly Health Committee hearing Thursday. Most of the testimony fell along conventional battle lines, with Democrats questioning the bill’s ramifications for pregnant women facing medical emergencies and the legality of in-vitro fertilization.

Sande and Republican state Rep. André Jacque, one of the amendment’s authors, repeatedly explained that by enshrining the principle of prenatal personhood and reserving for the legislature the authority to implement that principle, AJR 130 simply takes such controversies out of the judiciary’s hands and leaves them to be settled by the legislative process, which is subject to vigorous debate, feedback by lawmakers’ constituents, and elections to register the people’s approval or disapproval of the outcome.

Because it does not contain a direct prohibition on abortion, its supporters say, the personhood amendment cannot be struck down by federal courts as conflicting with Roe.

There was some debate within the pro-life camp, however. National Right to Life Committee (NRLC) general counsel James Bopp, Jr., argued it was “too risky” to pursue personhood before overturning Roe, because having it on the books alongside the “right” to abortion creates a conflict between two competing legal rights, with no guarantee judges would prioritize life over “choice.”

Bopp argued that personhood language has not stopped the Supreme Courts of other states from creating “rights” to abortion, and therefore AJR 130 should instead state simply, “the Wisconsin Constitution shall not be construed to protect or secure a right to abortion.”

He further suggested the historical precedent of abolishing slavery shows personhood strategy to be insufficient, because the abolitionists addressed the issue with no less than three constitutional amendments (an unusual claim in light of the fact that one of those amendments, the Fourteenth, is the very legal authority personhood advocates cite as guaranteeing equal protection to the preborn).

Personhood Alliance and Personhood Virginia president Gualberto Garcia Jones testified in support of AJR 130. “The idea of personhood is much broader than just abortion,” Jones said. “There are issues of embryonic stem-cell research, embryo-destructive research, IVF, there are all sorts of different issues that would make a personhood amendment necessary beyond just abortion.” He contended that while abortion is currently the “most grotesque” of these issues, future technological advances would birth new deprivations of human life, and only personhood offers the foundation for addressing them.

Jones also responded to Bopp’s testimony on various points, noting the irony that Bopp “is probably hated even more intensely by the Left than I am because he is actually the country’s foremost proponent of corporate personhood, having carried the case of Citizens United,” he noted. “But somehow he comes to this legislature arguing against us recognizing the personhood of the preborn.”

Jones also elaborated in follow-up comments to LifeSiteNews. “Bopp said if we wanted to ban abortion we should just pass an amendment stating that abortion is prohibited (which would be struck down immediately by the feds), or that abortion is not a state constitutional right in Wisconsin (which would probably survive, but which NRLC would not support anyways unless it included rape exceptions such as the lame amendment they supported in Kansas),” he said. “Also, the problem with Bopp's approach (suggested disingenuously) is that it would be limited to abortion and would not affect the wide array of ways in which the unborn are under attack: unregulated in vitro, embryo-destructive research, genetic manipulation – chimeras, organ harvesting, etc.”

“The Wisconsin personhood amendment is the right approach because it harmonizes the scientific definition of life beginning at conception, with the legal definition of a person as the bearer of inherent inalienable rights,” Jones told LifeSite. “It is also the right time for this amendment because state activist courts are trying to preempt a reversal of Roe by inventing state rights to abortion. Lastly, it is a smart amendment because it takes away the power of the court to decide the matter and leaves it to the legislature, but only to the extent that they get to determine how to uphold the right to life, and never whether they uphold the right to life of the baby or establish a right to abortion.”

Bopp and NRLC have long opposed the personhood strategy and tend to oppose direct, state-level abortion bans, advocating that pro-lifers must wait for the US Supreme Court to overturn Roe before mounting a direct attack on legal abortion. NRLC and its affiliates also tend to insist on rape exceptions in pro-life legislation.

One potential pitfall of placing all pro-life hopes with the judiciary, however, is that most national pro-life groups tend to endorse Republican judicial nominees without confirming how they’d rule on Roe, yielding a current Supreme Court where Justice Clarence Thomas is the only confirmed anti-Roe vote (though most are confident that Justice Samuel Alito would rule against Roe as well). The other three right-leaning justices, particularly John Roberts and Brett Kavanaugh, have given mixed signals on their likelihood of overturning Roe.

In order to amend the Wisconsin Constitution, AJR 130 must first pass both chambers of the legislature, then be ratified by the voters of the state. Republicans currently control both the Assembly and Senate; the governor (currently Democrat Tony Evers) has no role in the amendment process.