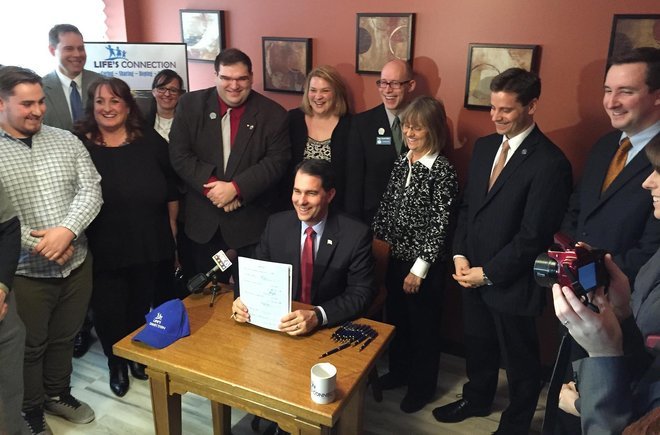 Even the site of the signing, a pro-life women's pregnancy center named Life's Connection in Waukesha, underscored that the governor embraced a new culture on abortion.

Assembly Bill 310 redirects the state's Title X funding away from Planned Parenthood of Wisconsin (PPWI) to other community health providers, a strategy favored by Republicans at the national level. It is expected to cost PPWI $3.5 million annually in tax revenue.

Currently, Planned Parenthood is the only statewide recipient of Title X funding. The bill passed the Assembly by a 60-35 vote.

The second new law (S.B. 238) only allows Planned Parenthood to bill Medicaid for the actual cost of contraceptives, a move that will save taxpayers an estimated $4.5 million.

In 2014, the state's Department of Health Office of Inspector General (OIG) found that two family planning facilities alone had charged the Medicaid program more than twice their allowable cost for birth control. Planned Parenthood warned, if it had to obey the law on reimbursements, it would have to close some of its offices. PPWI's public policy director, Nicole Safar, said at the time such an action would trigger “clinic closing” actions statewide.

The prospect did not concern the state's pro-life leaders. “Planned Parenthood of Wisconsin profits from killing unborn babies and sexualizing our youth,” Miller said. “This is not health care but rather a violation of the trust of women and families.”

That bill passed the Assembly with a vote of 61-35. Both passed the state Senate by a more narrow, 19-14 vote.

“Today, we signed two bills into law that prioritize women’s health while improving government and its services to the citizens of Wisconsin,” said Gov. Walker, a onetime 2016 Republican presidential front runner. “These bills require DHS to apply for additional federal funding for women’s health services to be obtained from less controversial providers and ensure prescription reimbursement processes are handled in a cost-based and transparent manner.”

Alliance Defending Freedom Senior Counsel Casey Mattox, who testified on behalf of both bills, said today, “The taxpayers deserve better than an organization with a long track record of abusive and potentially fraudulent billing practices, that have been caught in authenticated undercover videos negotiating prices for baby body parts, and that have repeatedly failed to report the sexual abuse of girls.”