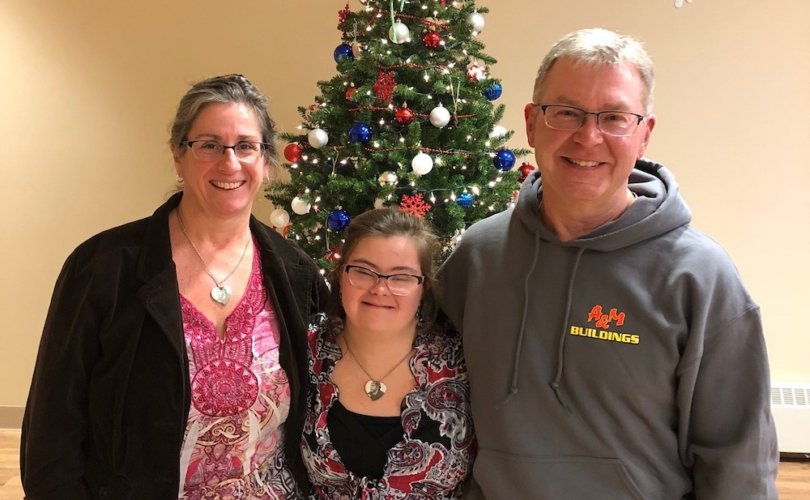 APPLETON, Wisconsin (LifeSiteNews) — A Wisconsin couple wants answers after a Catholic nonprofit hospital listed and treated their unvaccinated daughter with Down syndrome as a Do Not Resuscitate (DNR) case without their consent ahead of her death.

The Epoch Times reported that 19-year-old Grace Schara was admitted to St. Elizabeth Hospital in Appleton on October 6, 2021, five days after testing positive for COVID-19. Schara had Down syndrome, and was described by her father Scott as high functioning. St. Elizabeth is part of Ascension, which purports to be “faith-based.”

Parents Scott and Cindy Schara say that from the start, hospital staffers criticized the family’s rejection of the COVID-19 vaccines and their acceptance of early treatment protocols recommended by the group America’s Frontline Doctors. They also butted heads over Scott and Jessica (Grace’s sister) Schara’s eventually-successful efforts to stay with Grace as her patient advocates via the American Disabilities Act, as well as Scott turning off the alarms in her room to help her sleep after staff repeatedly disregarded his requests to have the alarms only sound off at the nurse’s station.

Scott alleges that Grace’s blood oxygen level was repeatedly recorded as lower than it actually was, to attempt to justify placing her on a ventilator. Because he was present, however, he says he was able to investigate and determine that faulty equipment was responsible for the low readings.

“So they wanted to have us make a preemptive decision so then they could decide whenever they wanted to put Grace on the ventilator,” Scott told The Epoch Times. “That’s significant because this is what they do: They want this decision by the family to be in their back pocket.”

More alarmingly, on the morning of October 13, Jessica was told she had to go home to take a shower, which was the opposite of what Scott had been told: that he had to remain in the hospital for the duration of his stay so as not to risk bringing COVID-19 inside. “So why did they have a different set of rules for her that day than they did for me?” Scott asked.

During the hour Jessica was away, Grace was strapped down to her bed, her health had declined, and her sedation had been increased.

That day, Grace was given a combination of a sedative, an anxiety medication, and morphine, despite the fact that the package insert for the morphine injection warned that using it in conjunction with other drugs she had been given “may result in profound sedation, respiratory depression, coma, and death.”

Jessica says her sister felt cold after the 6:15 p.m. morphine injection, which a nurse claimed was normal. Another nurse claimed they could not intervene because she was coded as Do Not Resuscitate. The family insisted that she wasn’t, to no avail. Grace died at 7:27 p.m.

State law requires that a patient’s health care agent (in this case Cindy) sign written consent for DNR status, and that such patients must wear a DNR bracelet. Neither was the case here.

“When we yelled, ‘she’s not a DNR, please help our little girl,’ and the nursing staff stood there saying, ‘She’s DNR,’ that was the final violation that resulted in her death,” Scott says. “We were giving them direction to resuscitate the patient, and they didn’t.”

The family says some individual staff members, including a nurse and a security guard, told them they agreed the hospital’s treatment of Grace “wasn’t right,” should be reported “to the higher-ups,” and that they “didn’t believe Grace should’ve died.” They have submitted a 14-page report on their ordeal to the hospital (which has yet to comment publicly on the situation), and are currently fighting to get Grace’s cause of death listed as gross negligence.

“Before going public, the family submitted a detailed summary, with supporting research, to the hospital with a request to meet with the CEO and the doctor involved,” the family says, recognizing “their ethical and Biblical responsibility to give both of them the opportunity to discuss their perspectives. The hospital response was a refusal to meet.”

Notably, Scott Schara contracted COVID-19 himself while at the hospital, for which he got a “completely different experience” at St. Vincent Hospital in Green Bay. Despite his symptoms being more severe than Grace’s, he received less intrusive treatment closer to the recommendations of the frontline doctors than the establishment protocols.

He said they put him on vitamins and supplements instead of sedatives and anxiety medications, as well as daily nebulizer treatment. “They never pushed for a ventilator or remdesivir,” Scott says. “I truly believe that if Grace had come to this hospital she would still be alive today.”

Disabled Rights Advocates and Truth for Health Foundation attorney Todd Callender told The Epoch Times that such cases, which he says have been brought to him every day since July 2021, stem from World Health Organization (WHO), Centers for Disease Control (CDC), and National Institute of Health (NIH) treatment protocols, as well as liability protections for health providers enabled by the federal Public Readiness and Emergency Preparedness (PREP) Act and financial incentives in the form of federal reimbursements for the use of potentially-harmful drugs like remdesivir.

Further information on the tragedy, as well as on Grace’s life and ways to aid the Schara family and others facing similar crises, can be found at OurAmazingGrace.net.