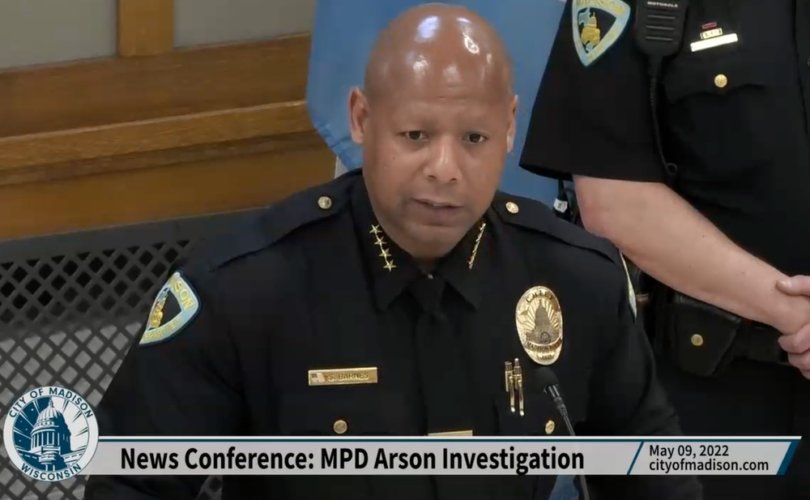 MADISON, Wisconsin (LifeSiteNews) — A Wisconsin police department has partnered with federal authorities to investigate the Mother’s Day firebombing of a pro-life advocacy center.

The department’s police chief has drawn criticism, however, for seeming to sympathize with the apparent pro-abortion vandals.

“The Madison Police Department understands members of our community are feeling deep emotions due to the recent news involving the United States Supreme Court,” Madison Police Chief Shon Barnes said in a May 8 statement, responding to the arson and vandalism of an office belonging to pro-life advocacy group Wisconsin Family Action earlier that morning.

Barnes noted that the police department launched an investigation of the “suspicious fire” that was reported at the building early Sunday morning.

The Wisconsin Family Action headquarters, located near the Dane County Regional Airport on the north end of Madison, was vandalized and set ablaze early Sunday morning.

LifeSiteNews reported that after a Molotov cocktail thrown through a window into one of the offices failed to ignite, one or more individuals started another fire that burned one of the walls before the Madison Fire Department quickly put out the blaze.

In addition to setting the fire, someone spray-painted, “If abortions aren’t safe then you aren’t either” on the outside of the building.

Wisconsin Republican U.S. Sen. Ron Johnson decried the firebombing in a May 8 tweet as “abhorrent,” arguing it “should be condemned by all.”

This attack is abhorrent and should be condemned by all. https://t.co/CGnPmMJUmo

“Our department has and continues to support people being able to speak freely and openly about their beliefs,” Chief Barnes said in the statement.

“But we feel that any acts of violence, including the destruction of property, do not aid in any cause,” he added.

“Our department has and continues to support people being able to speak freely and openly about their beliefs.

But we feel that any acts of violence, including the destruction of property, do not aid in any cause.”

The police chief’s statement appearing to sympathize with the “deep emotions” of pro-abortion activists drew the ire of Twitter users after a segment of the statement was posted on the social media platform.

In the May 8 statement, Barnes said the department is working with the Madison Fire Department and their “federal partners” to “investigate this arson.”

On Monday, the police department held a press conference in collaboration with the Milwaukee FBI field office and St. Paul Bureau of Alcohol, Tobacco, and Firearms (ATF) to provide updates regarding the investigation of the incident.

“I want to start off by saying that there is no room for hate or violence in Madison,” Barnes said during the press conference, describing the arson attack on the pro-life group’s building as “the fruits of hate and violence.”

Barnes went on to again soften his rhetoric, however, noting that “emotions are high on every side” of the abortion debate after the leak of the U.S. Supreme Court’s draft opinion in the crucial abortion case, Dobbs v. Jackson Women’s Health Organization.

FBI assistant special agent in charge (ASAC) Robert Payne told reporters Monday that the incident is being looked at as a violation of the pro-life group’s first amendment rights to freely express their opposition to abortion.

“People have their opinions, and when we violate that, and we use a criminal activity or violence in that nature, the FBI and our federal authorities will look at that for all federal statutes in which to investigate,” Payne said.

In a statement released to Twitter, the Milwaukee FBI office noted that its agents, the St. Paul ATF, and the Madison Police Department have launched “a joint investigation of an abortion extremism case involving an arson and graffiti attack of a pro-life advocacy office.”

ASAC Robert Payne joined @madisonpolice Chief Barnes and @ATFStPaul for a Monday press conference to announce a joint investigation of an abortion extremism case involving an arson and graffiti attack of a pro-life advocacy office in Madison, WI. Call w/ tips at 608-266-6014. pic.twitter.com/DjZGWSSSrL

No arrests had yet been made and no suspects had been identified as of the time of the press conference.

However, on Tuesday, an organization calling itself “Jane’s Revenge” claimed responsibility for the arson and vandalism, warning that its members will perpetrate more acts of violence against pro-life organizations unless they disband.

The Wisconsin State Journal, which said it was not able to verify the group’s authenticity, reported that the activists allegedly targeted Wisconsin Family Action for its pro-life views.

“This was only a warning,” the group said. “We demand the disbanding of all anti-choice establishments, fake clinics and violent anti-choice groups within the next 30 days.”

Federal agents and detectives from the Madison police department are investigating the group’s claim, The Guardian reported.