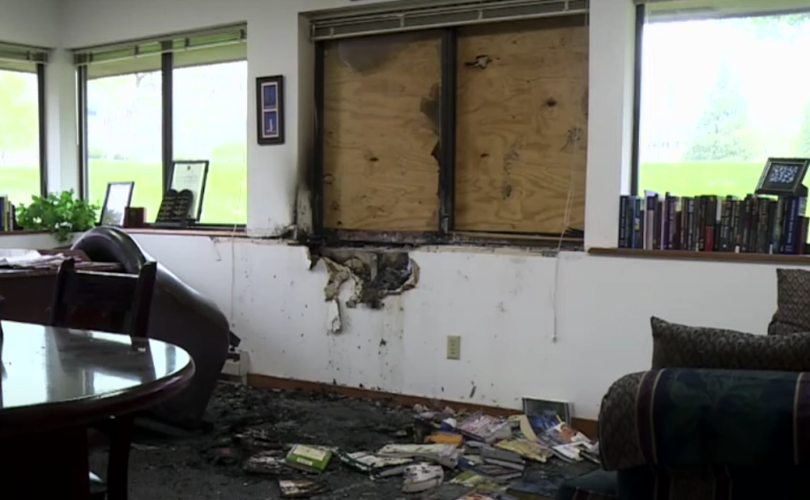 MADISON, Wisconsin (LifeSiteNews) The headquarters of pro-life advocacy group Wisconsin Family Action was set ablaze in an act of arson and vandalism in the early hours of the morning on Mother’s Day. A Molotov cocktail was thrown into one of the offices through a window, and although it failed to ignite, arsonists started another fire that burned one of the walls and wrote in graffiti on the outside of the building, “If abortions aren’t safe then you aren’t either.”

The incident took place on the north end of Madison early Sunday morning. The Madison Fire Department brought the fire quickly under control after receiving a call about the fire around 6 am. The department said in a statement Sunday, “We have made our federal partners aware of this incident and are working with them and the Madison Fire Department as we investigate this arson.”

Julaine Appling, the president of Wisconsin Family Action, whose office was the one attacked, said on Sunday, “There’s nothing we have done to warrant this. We ought to be able to take different sides on issues without fearing for our lives. Had anybody been in the office, they would have, at a minimum, been hurt.”

Appling said she was about to attend a Mother’s Day brunch at her church in Watertown, Wisconsin, Sunday morning when she was notified of the attack at her office. “I got a call from building management here saying there had been a break-in and a fire started.” She went to the building and discovered “the havoc and property damage.”

The crime has drawn condemnation from both pro-life advocates and pro-abortionists on the left. Even Planned Parenthood of Wisconsin felt compelled to denounce the violence, though they used the occasion to claim that their horrific work of murdering unborn children was “rooted in love.”

“Our work to protect continued access to reproductive care is rooted in love,” Tanya Atkinson, president of Planned Parenthood of Wisconsin, said. “We condemn all forms of violence and hatred within our communities.”

Tony Perkins, president of the Family Research Council, which works together with Wisconsin Family Action in the cause of life, attributed the arson and vandalism to left-wing pro-abortionists aiming to intimidate pro-lifers, vowing that they would not succeed.

“We are grateful for the unwavering leadership of Wisconsin Family Action,” Perkins said, “and the dozens of family policy councils around the country that are committed to the sanctity of all human life.”

Acknowledging the threats to pro-life advocacy groups following the leak of the Supreme Court draft opinion in the Dobbs v. Jackson case that would overturn Roe v. Wade, Appling said, “I knew automatically that anybody that took a position in favor of how the opinion was written should probably be paying more attention to their safety. Still, this kind of direct attack was shocking.”

Speaking to effect of the vandalism, Appling said, “I think what affected me more than what I saw on here was what I saw out there on the graffiti, because that is an overt threat. That to me, is worthy of police investigation. I don’t know are they done? Do you suppose they’re done? Or do they have more things planned for us?” she wondered.

Appling attributed the arson to “the anger and the lack of tolerance from the pro-abortion people toward those of us who are pro-life.” She affirmed that Wisconsin Family Action would not be intimidated by the threats and violence, however. “We will repair our offices, remain on the job, and build an even stronger grassroots effort,” she said. “We will not back down. We will not stop doing what we are doing. Too much is at stake.”

The Madison Police Department condemned the attack, assuring the public that they are conducting further investigation. In their statement on the incident, they said, “Our department has and continues to support people being able to speak freely and openly about their beliefs. But we feel that any acts of violence, including the destruction of property, do not aid in any cause.” They will issue an update on the case at 2pm CT on Monday, May 9.