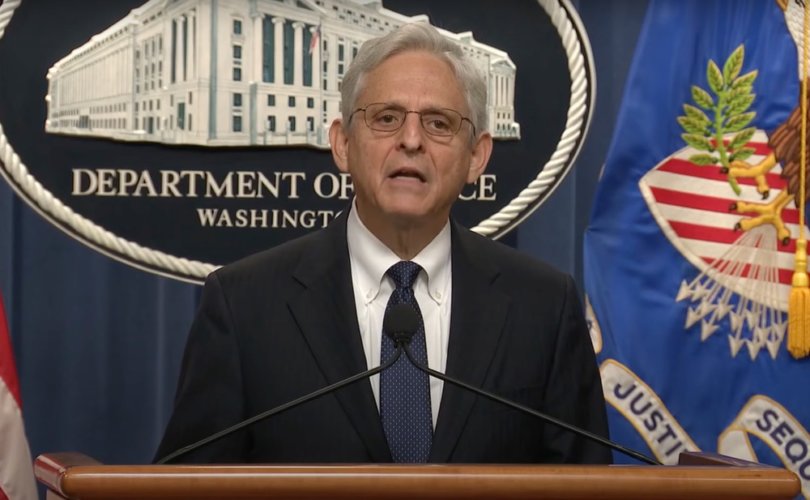 WASHINGTON, D.C. (LifeSiteNews) – Biden administration attorney general Merrick Garland said Thursday that he personally gave the go-ahead for the FBI raid on former President Donald Trump’s residence earlier this week. The raid has stunned the nation and drawn widespread condemnation as the corrupt action of a “banana republic.”

During an August 11 press conference, Garland said he “personally approved the decision to seek a search warrant” of Trump’s residence at the Mar-a-Lago Club in Palm Beach, Florida, adding the “department does not take such a decision lightly.”

Garland, who now heads up the U.S. Department of Justice (DOJ) under the Biden administration after being unsuccessfully nominated for the U.S. Supreme Court by former president Barack Obama, also announced that the DOJ had “filed a motion in the Southern District of Florida to unseal a search warrant and property receipt relating to” the raid.

During Garland’s comments, he acknowledged that the DOJ hadn’t made “any public statements on the day of the search,” and observed that Trump himself “publicly confirmed the search that evening, as is his right.”

“The department filed the motion to make public the motion and receipt in light of the former president’s public confirmation of the search, the surrounding circumstances, and the substantial public interest in this matter,” he said, adding that “copies of both the warrant and the FBI property receipt were provided on the day of the search to the former president’s counsel who was on site during the search.”

The move to unseal the warrant comes after federal magistrate Judge Bruce Reinhart on Wednesday ordered the DOJ to “file a Response to the Motion to Unseal” the document no later than August 15.

Reinhart, who previously worked as a federal prosecutor and later as a defense attorney representing individuals connected with convicted high-profile sex offender and trafficker Jeffrey Epstein, had himself signed off on the FBI’s application for the warrant application for the raid, Politico reported.

Meanwhile, though Garland stated that Trump’s counsel was “on site” to receive copies of the warrant and property receipt, Trump previously wrote that the “FBI and others from the Federal Government would not let anyone, including my lawyers, be anywhere near the areas that were rummaged and otherwise looked at during the raid on Mar-a-Lago.”

“Everyone was asked to leave the premises. They wanted to be left alone, without any witnesses to see what they were doing, taking or, hopefully not, ‘planting,’” Trump continued, suggesting agents may have used the opportunity to “plant” incriminating evidence.

“Why did they STRONGLY insist on having nobody watching them? everybody out?” the former president asked, pointing out that “Obama and Clinton were never ‘raided,’ despite big disputes!”

During the Thursday press conference, Garland went on to insinuate that the FBI raid on the former U.S. president and current political rival of Joe Biden was based on an even application of the law.

The attorney general also defended the FBI against criticism from those who have argued that the unprecedented raid shows the FBI has been used as a political tool to harass and intimidate opponents of the administration.

“I will not stand by silently when their [FBI’s] integrity is unfairly attacked,” Garland said, characterizing “the men and women of the FBI and the Justice Department” as “dedicated, patriotic public servants.”

‘I will not stand by silently while the integrity of the political hacks who colluded with Hillary to spy on Trump and cook up the demonstrably false smear that he ‘colluded with the Russians’ to undermine his entire (duly elected) administration is rightly attacked.’ https://t.co/IgHgEOU2WA

Garland has drawn sharp criticism for his remarks, from his admission that he approved the raid to his failure to give further details or take questions from the press.

“Confirmed. AG Garland personally approved the raid on Trump, as many of us have assumed all week,” wrote radio host Buck Sexton. “There better be a d*mn good reason for this. But there isn’t.”

“The last 6+ years have shown the DOJ has 2 sets of rules,” wrote South Dakota Republican Gov. Kristi Noem. “If your name is Biden, Clinton, or Obama you and your family get a free pass. If your name is Trump, you’re under constant assault. AG Garland’s rambling and defensive 5 minutes did little to prove otherwise.”

How in the world is Merrick Garland investigating his boss Joe Biden’s top political rival, Donald Trump? This is unprecedented banana republic insanity. He has to recuse himself, this is clear bias: pic.twitter.com/NXFV5FnAbH

The raid itself has dominated national news throughout the week, with conservatives pointing out that the FBI has destroyed its credibility as a nonpartisan federal crime-fighting agency.

On Monday, Florida Republican Gov. Ron DeSantis slammed the search as “another escalation in the weaponization of federal agencies against the Regime’s political opponents, while people like Hunter Biden get treated with kid gloves.”