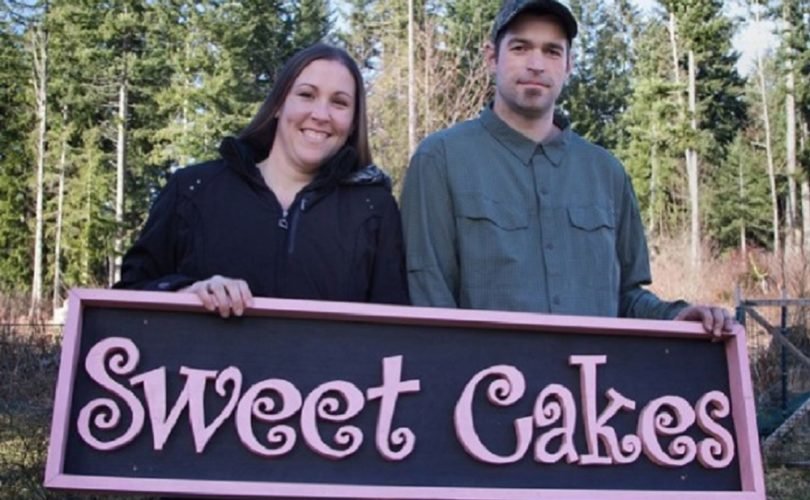 GRESHAM, Oregon, July 17, 2015 (LifeSiteNews) – Christian  bakers Aaron and Melissa Klein say the $367,000 raised on the crowdfunding site ContinueToGive.com for their support and legal defense shows that “the American people won't allow their constitutional rights to be stripped away.”

The Kleins, of Gresham, Oregon, knew that baking wedding cakes “in the most agnostic state in the Union” could lead to trouble with homosexuals well before 2013. That was the year when they refused to bake for a lesbian wedding party, which sparked an Oregon Bureau of Labor investigation, a hostile telephone campaign that shut down their bakery, and a $135,000 award to the aggrieved couple.

Now the heavy-handed collusion of the homosexual lobby and the state bureaucracy against the Christian parents of five children has alarmed even homosexuals and straight supporters of same-sex marriage, who have donated to the fund or offered moral support.

“Being given that kind of money is a humbling experience,” Aaron Klein told LifeSiteNews Thursday. “It shows that this is not a settled issue.”

It certainly is not. Klein promises to appeal Oregon's decision “to a court that actually acknowledges our constitutional freedoms.” Social conservatives across the U.S. are rallying to his cause.

“The State of Oregon has denied me my constitutional rights,” Mr. Klein told LifeSiteNews.  “Not only my First Amendment rights to free speech and religious freedom, but also due process.”

The Kleins operated from their home from 2006 to 2009, when, Mr. Klein wryly admits, “I got burned out because there was cake all over the house. [Melissa] was doing three or four wedding cakes a weekend. So let's open a shop.” Everything went fine until a lesbian couple ordered their wedding cake and the Labor Board launched their investigation.

In September 2013, after a concerted telephone campaign aimed at other wedding service firms who referred customers to the Kleins, and a loss of 60% of their business, the bakers moved back into the home kitchen, doing business just for family and friends. Now the Kleins are back to baking out of their home, while Aaron drives a garbage truck.

Well before the complaint was lodged against Sweet Cakes by Melissa, Mr. Klein discussed the possibility with his wife based on how the same-sex marriage issue was playing out in Washington State, a few minutes' drive from Gresham. “We might have an issue because we might be in confliction because of our faith with what is going on out there,” he said. “We might be asked to do something that we in good conscience couldn't do.”

Mr. Klein told LifeSiteNews that he apologized at the outset when he told the couple he could not do their cake – to no avail. The next thing he knew, the Labor Board was investigating. Among his own complaints he has about the unfairness of the process, two stand out: the evident bias of the board chairman, Brad Avakian, who served as quasi-prosecutor and judge, and the lack of due process.

About  Avakian, Mr. Klein says, “The man's an activist. He believes in what he calls 'equality.' He has made it his mantra over the last 10 years of his political career. So for someone to speak out in the opposite of what he thinks should be the law of the land, he is going to use the full force of his office to stop that.”

As for due process, he notes that the state did not supply his lawyer with its evidence against him, as required in criminal and civil cases, at first claiming inadvertence and then insisting that regulatory law did not require it. This prevented the Kleins' legal team from preparing a proper defense. “They literally came out and said that due process does not apply in their court,” Klein told LifeSiteNews.

Among the evidence withheld were emails that indicated that the lesbians' complaint was a motivated by politics and not actual harm. Nonetheless, their claim itemized things like loss of sleep and weight gain, which were all dutifully monetized by the Bureau of Labor and incorporated in the $135,000 award.

Another bone of contention is Avakian's gag order. This consists of a directive, within the ruling, that the Kleins must cease arguing the case on social and news media on pain of further fines, because to speak out constitutes a promise to continue the prohibited discrimination.

This, says Klein, is another infringement on his freedom of speech. “He told me I can't say, 'I'm going to fight this.' I can't say. 'I'm going to stand firm.' I can't say, 'We are Christians and we believe in God and the Bible and that's who we are.' Those are things he cited in the ruling and said those things are advertising that discrimination would take place.”

Now the Kleins are working on their appeal. “We have so many issues to bring before an appellate court. We are actually working on that right now,” Mr. Klein told LifeSiteNews, adding that the family's faith has sustained it. “You follow the Lord, and there tends to be all sorts of trials but also a joy you can't find anywhere else.”